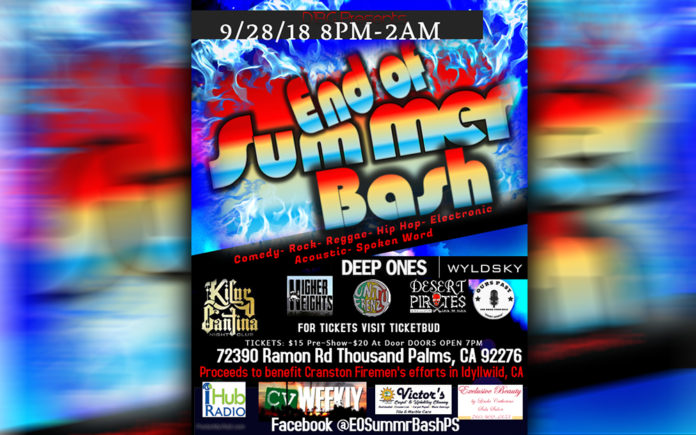 After a trying summer with record-breaking heat, the Second Annual End of Summer Bash is a great way to celebrate the end of the season. The event will be held on Friday, September 28 at 8 p.m. at Kilo’s Cantina in Thousand Palms. As event organizer Tamula Denton puts it, “Since you survived this hot ass weather, don’t you deserve to celebrate it with a Bash?”

The first End of Summer Bash was held at The Hood Bar and Pizza in Palm Desert and included just three bands. “Last year we had a very good turnout; The Hood was packed. This year I chose Kilos Cantina. If I continue the end-of-summer bash my idea behind it all is to have it in every different city of the valley,” She says. “What made me add more was from going around to all of the venues and just seeing different talents. I said, ‘you know, the desert doesn’t really have its own Coachella’ and people pay all this big money to see all these different acts but these guys are here sweating and grinding… year in year out trying to grow their craft and entertain folks… why do we not have our own representation of that? Everything that seems to grow a crowd here in the valley when it comes to music or the artists is a competition. This is not a competition,” Denton says.

Denton would also like to contribute to creating more diverse spaces and events by creating a diverse lineup of quality entertainment. “If it’s good, it’s good,” she says. “I’m a person who loves good music and people who have taken the time to develop their craft; I’m all about that. We’re a community and we should support each other. I don’t understand why, as small as the Coachella Valley is, it still seems to have such segregation within its entertainment community; the End of Summer Bash it about celebrating diversity. That’s why I have different types of music, different types of entertainment. You like comedy, you can come. You like hip hop? Hey, got something for you too. You like rock? Got it! What about reggae? There you go!”

The Bash is also meant to be a showcase of local talent, which Denton believes deserves recognition. “I’ve known all these artists throughout the years and I’ve seen them also develop as artists throughout their careers as musicians. Everybody’s at different levels and it’s okay… it’s all about celebrating the differences that we all have but seeing that we’re really not that different. I don’t understand why people aren’t coming in… just love the music,” She says. “They should have a stage dedicated for some of the local talent that are here, that are at a level where they can perform to bigger crowds.”

With four years of experience in the music industry, managing bands and organizing events, Denton says it’s her passion to help local bands become successful. “If you want to do music, if you want to do it full time, you have to understand the business behind it and managing yourself as artist marketing yourself as artist to these larger entities has to be done a certain way,” She says. “I was able to, through a lot of trial and error come up with a way of packaging artists that I can shoot up to these larger places and they get the job. But my thing is that a lot of times… artists don’t want to hear that.”

A portion of the proceeds from this event will be donated to benefit those affected by the Cranston fire. “Idyllwild is just… Under an hour away from us and it’s so easy to be so separate,” Denton says. “The things that affected all of them, it gets me.”

More information about the event can be found on the Facebook page End of Summer Bash PS. Tickets can be purchased from the event page via Ticketbud.com and cost $16.73.