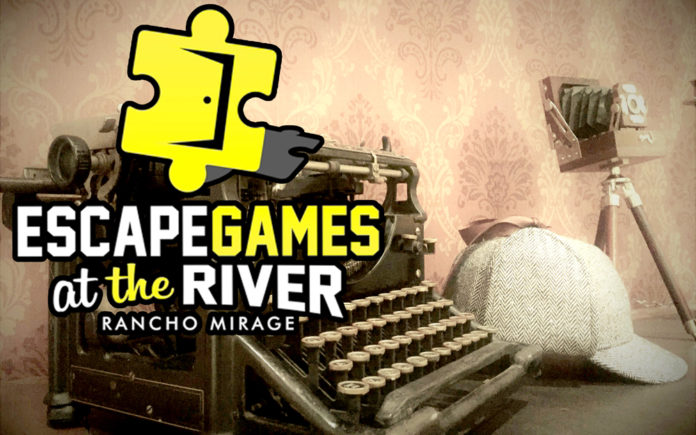 In the almost 30 years I have lived in the desert I have heard one message over and over again from young kids: “There’s nothing to do here.” The Escape Games at the River in Rancho Mirage are FUN for all ages and perfect for birthday, bachelorette, work and school parties.

Escape Games have been around for over a decade but more recently are gaining mainstream popularity. The idea began with online point-and-click adventure games where a player has to escape a room using the clues, solving puzzles, and critical thinking. Although the concept has been around since the 80’s, the term “escape the room” or “escape game” came to form in the early 2000’s.  Currently, there are many online escape the room games with different themes. Numerous companies have both online and mobile phone apps available.  In most of them, there isn’t a time limit, but each level gets harder and harder.

It’s no surprise that people began to bring these games to life. In most escape room games (both online and in real life), they involve a theme where players are emerged into a story line with an end goal in mind.  Because of the physical nature, real-life escape games were able to add a time limit which brings out a competitive nature in some.  Teams want to try to beat the fastest time or simply escape before the time runs out. Escape Games are an excellent form of amusement.  Each one has its own unique experience, different themes and puzzles.

This will be the final weekend to play their latest Halloween themed game called “Curse of Tituba.” They have a scary version and a non-scary version. Following that they will be having their Christmas game back this year called “Night Before Christmas.” A perfect game for families to get together and have a blast solving puzzles together! I was also told they are having a new game this January coming out that is going to be a HUGE hit!! Stay tuned for details.

So, if you’re looking for something unique to do with your friends, family, co-workers, or staff. Make sure you put Escape Games at The River on your list! For more information call (760) 668-9041.