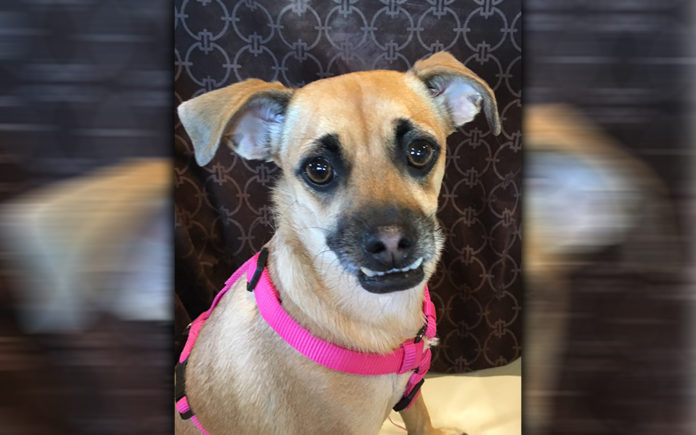 Bailey was adopted from a public shelter when she was an 8-week-old adorable puppy.  However, 10 months later her 83-yr-old human suffered a serious stroke and could no longer care for her.  No one in the family or circle of friends was willing to take 1-yr-old Bailey.  The dog’s future became grim as a family friend desperately called private rescue groups, learning most of them are full due to the endless flow of homeless animals.

Fortunately, Eva Fischer offered to foster little Bailey for Loving All Animals in Palm Desert (www.lovingallanimals.org). Bailey transformed from a despondent dog into a happy pup living with Eva and her dogs. Soon Bailey was adopted by a young couple with another little dog.

Bailey is one of the lucky dogs.  Sadly, over 500,000 cats and dogs end up in public shelters every year due to the death or incapacity of their humans.  Used to being in family homes, many of these animals become despondent or frightened in a kennel setting, and some end up euthanized for a variety of reasons.  Some are senior animals who gave many years of love to their families.  Now they are older, often with medical problems, and they are passed over for cute puppies and young frisky dogs.

The phone often rings at Loving All Animals with a familiar tale, “My mother died, and she left 3 dogs and 2 cats behind.  I leave town tomorrow, and my landlord doesn’t allow pets.  Can you take them?”  You may tell yourself, “If anything happens to me, my kids will take my dog.”  However, when the time comes, your daughter is married to someone allergic to animals and your son has a full house of critters.  If you have an agreement with someone to take your pet, check in periodically to see if their situation has changed.

Palm Desert attorney, Henry Casden Esq. advises, “The California probate code allows one to create a trust and put assets there to fund care for the pets they leave behind. Those expenses can include food, veterinary care and grooming.  If they care about their domestic animals, including dogs, cats, horses or birds, people should make a plan for where those animals will go.  They can name a person as trustee who will oversee the distribution of the funds to care for them.  I especially recommend a pet trust for anyone who is in their 70’s or 80’s, as well as anyone who is in frail health.”  Casden does pet trusts, and he can be reached at (855) 447-4442.

Do you want your beloved pet to end up in a public shelter, heartbroken and alone?  Make a solid agreement with a friend or relative to take custody of your pet, and check in periodically to see if their situation has changed.  Make sure their housing situation allows for another animal.  Consult with an attorney about a pet trust. Whether you are 33 or 83 years old, have a plan in place for the pets you love in case you can no longer care for them.

Most people assume they’ll outlive their pets, says Barry Seltzer, a Toronto-based estate lawyer and co-author of Fat Cats & Lucky Dogs: How to Leave (Some of) Your Estate to Your Pet.  Death and disability are topics many people refuse to face. The situation prompted Seltzer to pen a modified version of the Bible’s Proverbs 29:18: