Back in the ‘60s, the Kingsman (“Louie, Louie”), along with Paul Revere And The Raiders (“Kicks”), gave the city national exposure on the charts. In the ‘80s, the music veered from the ridiculous (Quarterflash), to the sublime (Wipers). Later in that decade Punk flourished. Even now, it’s home to Decemberists and Peter Buck, architect of R.E.M.

Currently, Portland’s best kept secret is Eyelids. The five-piece is an Indie super-group of sorts, featuring three guitarists, Jonathan Drews, John Moen and Chris Slusarenko, Jim Talstra on bass and drummer Paulie Pulvirenti. Individually, these guys have been in the Dharma Bums, Guided By Voices, Stephen Malkmus & The Jicks, The Minus 5, Elliott Smith, Decemberists and Boston Spaceships.

John Moen and Chris Slusarenko have been friends for nearly 30 years. Having both completed a tour for Boston Spaceships’ Let It Beard album, they decided to revisit demos they had originally written and recorded in the early part of the 21st century. 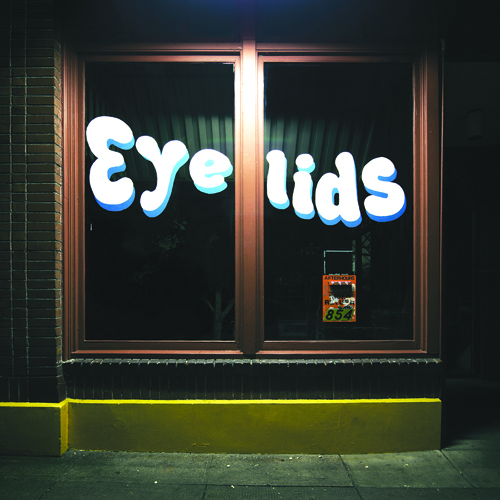 Pleased and inspired by their nascent efforts they corralled John Drews and headed into the studio, where they created another 13 songs on the spot. Recruiting Jim Talstra and Paulie Pulvirenti they added bass and drums and the result is Eyelids’ full-length debut, 854.

The album opens with the one-two punch of “Seagulls In Submission” and “Psych #1.” “Seagulls…” shimmers like a summer day as guitars ring and jangle. The lyrics paint a vivid tale of aviary terror on the beach, as they implore the menacing birds to “please leave.”

On “Psych…” cascading guitars collide with searing electric riffs and a stuttery beat. Here a romance on the rocks just needs a little emotional rescue…”a sliver of possibility.” Splitting the difference between madrigal and mea culpa, the track gathers speed on the urgent chorus.

These guys are master craftsmen, and the music on 854 is a sharp distillation of myriad influences. The lush acoustic filigrees and fey, falsetto vocals of “Frame We Filled” are supplanted by dissonant guitar. The track completely recalls the sun-kissed charms Paisley Underground heroes like Three O’Clock and Rain Parade.

Meanwhile the high harmonies on “Forget About Tomorrow” wash over forboding bass lines and ascending guitar notes like sweet nectar. The start-stop rhythms evoke the angular pleasures of New Zealand’s Straitjacket Fits and the lyrics offer this quiet carpe diem; “Wrapped in an embrace, a cracked smile upon my face/Forget about tomorrow, this is now.”

On “You Are Your Own,” “Say It’s Alright” and “854” the musical attack is more muscular. With “You Are…” a tough-minded pep talk is couched in a hook-laden melody.  Guitar riffs transmit like pinging sonar as the propulsive percussion puts the pedal to the metal.

On “Say…” the opening guitar licks feel like a sideways homage to the Hollies’ epochal “Bus Stop, Bus Stop.” Here, the tune is tethered to a galloping backbeat and tensile bass lines. Breathless lyrics recount a relationship teetering on the verge of collapse: “I’m drunk with you, but the screaming is what’s left of my mind.” Over the instrumental break guitars intertwine, see-sawing and careening, but nothing is resolved.

The title track is powered by tilt-a-whirl guitars. Spinning clockwise then counter-clockwise, they mirror the chaotic emotional ennui of the lyrics; “Broken our forgiveness, our solitary fate.”

The sunny, Country-Rock melody of “Abby’s Friends” belies angst filled lyrics that chastise an old pal. “You’re completely out of reach, I’m no better, call me please.”  The tune is anchored by a tick-tock beat and twangy guitars that fracture in the echo and sway.

Finally, “Into The Sun” recalls the narcoleptic charms of “Loaded” era Velvet Underground. Twee harmonies circumnavigate liquid guitar licks and a somnambulant French Horn. The lyrics feel despondent, but not quite suicidal.

Other interesting tracks include “Everybody,” which blends incandescent acoustic arpeggios with psychedelia-tinged electric clusters. The modal “Floating Underground” offers up a hypnotic chiaroscuro.

The long-player closes with “From A Distance.” Don’t freak out, it’s not the syrupy Bette Midler schmaltz-fest. This quiet benediction is fueled by sweetly plangent guitars that ring and chime.  The plaintive lyrics recall a moment of open affection; “We talked as friends might do, my jokes didn’t bother you and I wanted to sing/You made me feel unguarded, optimistic and open-hearted and I’m rarely such things.”

As nearly perfect as 854 is, their self-titled, four song EP is even better. From the ridiculously catchy and effervescent “Bound To Let You Down,” to the mid-tempo candy-coated crunch of “Broken Continue” and the wistfully piano ballad “Only Time Will Tell.” The EP winds up and then down with a trenchant take on the Dream Syndicate’s Paisley paean to all hallows eve, “Halloween.”

Without sounding warmed-over or derivative, Eyelids music recalls the halcyon days of College Rock. A purely ‘80s phenomenon, it began when campus stations played the music that mainstream radio ignored.

In those days, listening to music by Siouxsie & The Banshees, Husker Du and Robyn Hitchcock (while peers waxed rhapsodic over Stacey Q and Timex Social Club), felt covert and clandestine; a perfect Pop secret. Then Nirvana blew the doors open and everything became “Alternative.”

You don’t need a time machine to relive that golden era, just add some Eyelids to your day. It will all come rushing back.