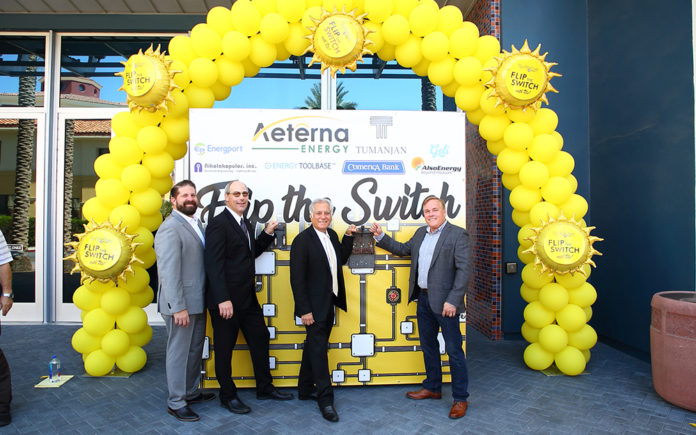 The iconic state-of-the art Mary Pickford Theatre today hosted a ”Flip the Switch” event, showcasing a self-sustaining Renewable Energy plant housed at this privately owned commercial property. Consisting of a 620 kW roof mounted solar system paired with a 1000 kw/hour energy storage plant, making the Mary Pickford Theatre the first of its kind in California. It has also been recognized as one of the premier privately owned building energy storage operations in the country.

Riverside County elected officials including Assembly member Eduardo Garcia, a member of the State of California Energy and Utilities committee, Supervisor V. Manuel Perez of the Fourth District, Deyssi Partida for Congressman Raul Ruiz representing the 36th District, and State Senator Jeff Stone (R-Riverside), along with Cathedral City Mayor Stan Henry and other officials gave proclamations at the event in support of this green sustainable system.  These legislators have been early supporters of state green initiatives and are instrumental in supporting renewable energy legislation in the state of California. 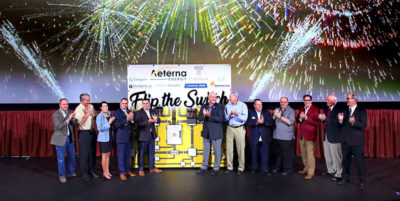 Engineered and constructed by Ronald Harris of Aeterna Energy based in Southern California, the system will be maintained long term by the company which specializes in such large commercial and government projects. This new generation of solar with a combined solar and battery storage system, will enable the theater to be almost completely electrically independent during its operating hours, which is especially remarkable considering the extreme temperatures of the desert lasting for four or more months annually. Notably, this project precedes much state legislation, such as Senate Bill 700 that mandates 100% renewable energy by 2045 and requires the promotion of energy storage as a solution to the heavily burdened electrical grid through the Self Generation Incentive Program.

​Key partners that worked alongside Aeterna Energy include Jack Chen of Energport Inc. storage battery systems manufacturers out of Fremont, California, Alex Nikolakopulos of Nikolakopulos Electrical Engineering well known for decades in the Coachella Valley, special thanks to Comerica Bank and team VP’s Dan Grady and Jenny Hsu Smyth for boldly stepping forward in the Banks financing of the project, and the entire Tumanjan team from Tumanjan General Contractors.

“We are excited to be an early adaptor of this new generation of power generation and energy storage” said Damon Rubio, Founder of D’Place Entertainment, the operators of the Mary Pickford Theatre. “Once we were shown that the potential savings and return on investment of a combined system to be much greater than employing solar alone it was a no-brainer. We are also very proud to be doing our part in the community to reduce our carbon footprint.”

Unlike traditional energy systems, this solar and battery storage system is able to store unused solar energy generated during the day, to be used at night, rather than the available power going to waste from overproduction. In addition to benefitting the theater, a project such as this relieves stress on the grid for consumers, and also helps Southern California utilities to optimize the amount of renewable energy utilized on the grid, supporting state policymakers goal of reducing greenhouse gas emissions 80 percent by 2050.

As part of the celebration of going green and becoming more energy self-reliant, the ownership of the Mary Pickford Theater made donations to a number of local organizations that they are proud to support. These included Destiny Church, Variety Club of the Desert, Fellowship of Christian Athletes, and the Boys and Girls Clubs of the Coachella Valley. Michael Tumanjan representing the theater’s ownership stated: “We are proud to be a part of the Coachella Valley Community and contribute to the work of these amazing organizations that enrich and empower the lives of so many individuals.”

Award-winning Sandie Newton emceed the event. She currently hosts “KMIR Cares” airing weekly on the local NBC affiliate. Newton carries many industry accolades and was a former host for “Hollywood Insider,” “Hollywood Report,” “Primetime Tonight,” and “Hollywood Steal.” Notably, she was an original anchor for E!, and an entertainment reporter for KCAL Los Angeles.