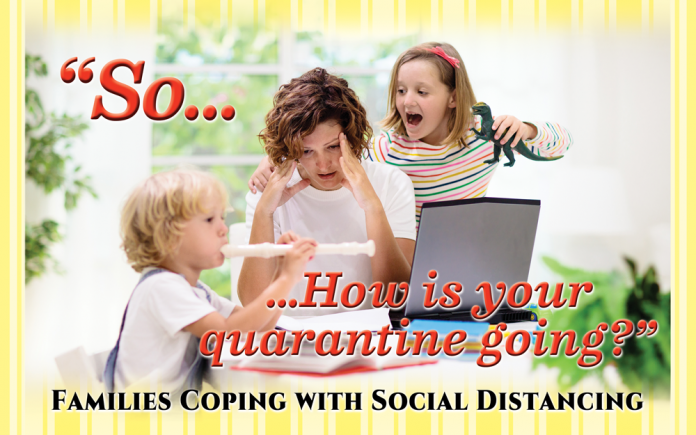 As the coronavirus (COVID-19) pandemic continues to be prevalent across the country, communities are sheltering in place in order to prevent the spread of the disease. The Trump administration announced that the social distancing guidelines currently in place would be extended through the end of April, meaning that only necessary businesses will remain open and people are to shelter in place at their homes to help curb the cases of COVID-19. 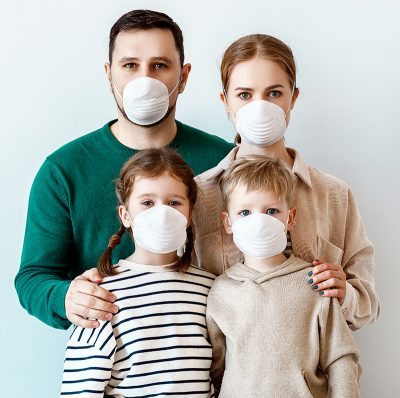 Coachella Valley families have been quarantined in their homes for quite some time already, with nonessential employees either working from home or being out of work for the moment. Children are also stuck at home with their parents as schools in Riverside County remain closed until the tentative date of April 30, with a likelihood of not going back into session until the next academic year.

Until the social distancing guidelines become less strict, families are confined to their homes for most of the day, their regular structure and routine drastically different from just a couple of weeks prior. Some families are having difficulties maintaining order and keeping their kids preoccupied.

Betty is a single mother who works as a critical care nurse in the ICU of a local hospital. She works three to four days a week and has a 5-year-old son named Caleb. While she is at working battling on the front lines against an invisible enemy, Betty has experienced firsthand the panic and despair caused by COVID-19 in the medical field. She herself feels evolving emotions throughout the day, coupled with the stress of ensuring that her work environment does not compromise the safety of her home life.

“When I get off work, I change my clothes in the parking lot so I don’t accidentally bring anything home with me that could potentially put my family at risk,” revealed Betty.

Since this pandemic has presented itself, Betty has been continuing the curriculum that her son’s teachers have sent home with him as the schools have closed. Right now, they are practicing handwriting through tears—the tears coming from Betty as a mother trying to juggle multiple new responsibilities.

“I am not a qualified teacher and there’s no way they can be replaced. But one piece of advice that I can give to other people is to listen to your officials. I know no one likes to be told what to do, but now is not the time to rebel. Just stay home; and if you’re an essential worker, practice good hygiene. It’s common sense,” urged Betty.

See Betty’s article about being on the front lines on page 4. 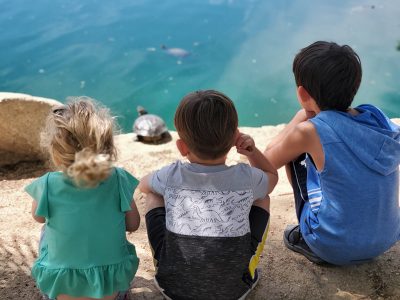 Palm Desert resident Theresa Jewett and her family are dealing with these strange times like most other families are right now: taking it one day at a time.  She has a 15-year-old son, another 15-year-old stepson, and a 20-year-old stepdaughter home from college.

“We also have a 7-year-old border collie mix that has taken on the role of personal trainer and life coach. He’s really good at barking orders,” commented Jewett.

Her two sons attend two separate high schools, one private and one public. The private school requires attendance for virtual classes and turning in assignments four days a week with an abbreviated schedule. Her son attending public school is, like most Coachella Valley students, waiting to see what the rest of the school year will bring. 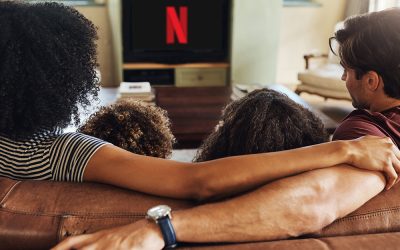 To a create sense of normalcy and routine, Jewett still has daily expectations set in place for her sons such as keeping their rooms clean, finishing chores around the house, taking the dog for walks, and since both boys are athletes, they also utilize the gym equipment in their backyard.

“Social distancing for teenage boys really isn’t that difficult when they both have every video game known to man. That keeps them pretty occupied in their downtime. And like most families right now, there is a lot of cooking and a lot of eating and a lot of Netflix. Have you watched Tiger King yet? I mean, what in the world,” said Jewett.

The most difficult part of being quarantined as a family is to create a new normal for the time being, according to Jewett.  Her children miss their friends and social lives, and she and her fiancée miss their own work and friends, plus being out in the community. Her parents live close by and Jewett has found it hard to stay away from them for the sake of their health.

“Because of the stress and anxiety of the unknown, it’s really important we practice a lot of patience, keep our sense of humor, get some fresh air and remember that this will pass. Every day I just remind these kids that they are safe, they’re loved and there is enough toilet paper for everyone,” concluded Jewett. 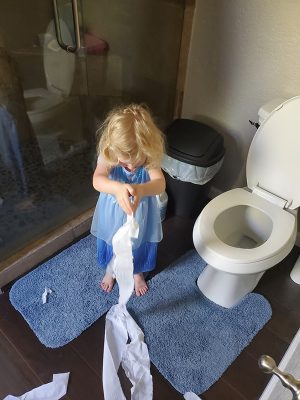 Bridgette McCarthy is another mother dealing with the circumstances of quarantining with young children. She has a 2-year-old, Louis, and has been helping watch her niece, Aubrey, who is in kindergarten. McCarthy is a stay-at-home mom, so she does not have to leave the house for work, but her husband is a Solar Sales manager and is having to adjust to a more impersonal format that he is not used to it yet. He usually goes to peoples’ homes to present proposals but has been home for the last two weeks.

“The hardest part is the uncertainty! I can’t tell if I’m over or under reacting. The stark contrast in behavior that I am seeing is confusing. I am generally a positive person and I remember learning in school that the Japanese word for crisis translates to ‘dangerous opportunity’. While this is undeniably a crisis, I notice that this is also an opportunity to shine a spotlight on important issues such as restoring our health care system and our environment,” stated McCarthy. 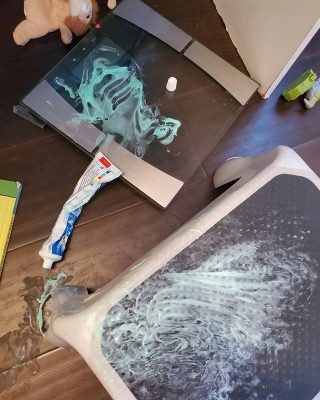 To pass the time, McCarthy and the kids enjoy spending time in their pool and walking around the neighborhood for exercise. There is a lot of play time indoors, but she still gets asked when they can go to the playground at the park.

“My niece asked me if the virus will be gone by her birthday, which is in June, and I felt uncomfortable that I did not have a clear answer for her. ‘Hopefully’ was the best I could do,” revealed McCarthy.

Jeremy and Tesla Roos are another family that has been feeling the effects of being quarantined at home. They have four children, 12-year-old Paula, 10-year-old Wyatt, 4-year-old Thomas, and 2-year-old Emily.

Tesla is a former caregiver and had more recently worked as a daycare teacher. She had just started a job at Dream Big Children’s Center in Rancho Mirage where she was the assistant to the director. Her job is to prepare and engage in activities for the children as well as help with administrative work and business development. She was told that they would have to shut the doors one day before Riverside County gave the order to shut down all the schools.

Jeremy still goes to work as the Chief Revenue Officer for a solar manufacturer/installer that has been deemed essential. The business’ operations are down since many of the cities have reduced their operations, including not issuing new permits at this time.

“Two hours after being notified that our children would be home for a minimum of three weeks, our youngest got into some nail polish and got it all over the bathroom. We knew she would be the hardest to deal with, but now we were scared,” recalled Jeremy.

Since the lockdown started, Tesla tries to keep the kids engaged with activities that are not just limited to watching a screen. The kids have been busy with several STEM sets and craft kits they had received for Christmas. By the end of the first week of quarantine, all those kits had been used. Problems started almost right away with their 12-year-old, as she refused to get out of bed at a reasonable time and help with the younger children. The first week also involved Jeremy going to Costco early in the morning to wait in line to get food, toilet paper, paper towels, and other necessities.

“Now Tesla’s days include setting up and tearing down activities for the younger children, including helping Emily change clothes, mostly princess dresses, dozens of times every day. The boys play video games together, but often end up fighting, so Tesla has to break it up… We live near Palm Desert Civic Center Park, so we try to get out for a walk every other day or so while practicing social distancing. The younger kids get upset when we go because they can’t play in the playground. When we come home, we immediately take off our clothes and take showers and the babies take a bath,” explained Jeremy.

Autumn Bennett of La Quinta works in the fast food industry and is taking online classes at College of the Desert. Her son Wesley is two and he loves to go on walks, since that is something that Bennett makes sure they still do every day to get him out of the house.

“The hardest part is just feeling cooped up and having to come up with things to do to entertain him. I am working on building my patience between him and with how this is affecting my life, my job with school, and financially taking care of my son,” said Bennett.

Although juggling different responsibilities as a single mother proves to be overwhelming sometimes, Bennett is thankful for the help of her grandparents, brother, and mother, who acts as Wesley’s main care giver when Bennett has to work.

While being cooped up in the house all day may be less than ideal to some, there is the reassuring truth that sheltering in place at home will better ensure the health and safety of others as the battle to prevent more cases of COVID-19 persists—keeping loved ones young and old out of danger.