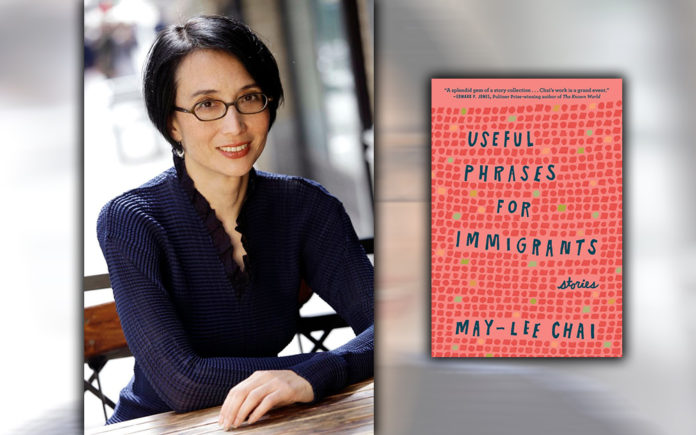 The great thing about the United States is that it is a country made up of people from all over the world.  It is a beautiful melting pot.  For the vast majority of Americans, the common denominator is there is an immigrant or two in their past and we are a sea of ethnicities.  When our relatives left their place of birth for a better life in the U.S., they became Americans.  In May-Lee Chai’s stories Useful Phrases for Immigrants (Blair, 143 pages) parents and children cope with place and identity.

The collection of eight stories are told with a Chinese or half-Chinese protagonist.

The title stories, “Useful Phrases for Immigrants” shares the inner concerns and observations of a young woman trying to move out her in-laws without dishonor.   Within her multi-generational household, she struggles to cope with the standards of the past and the American life she wants now.

“Fish Boy” tells the tale of a child who moves from his small village to help provide for his family and gets tangled up with the city’s street gang.  Lying to his grandfather about his new life, the boy learns he must adapt quickly if he is going to survive.

A young woman comes to terms with her white mother’s death after her Chinese uncle reminds her of the “old ways” to honor the dead in “Ghost Festivals.”

A naked girl is found murdered at a Beijing construction sight in “The Body.”  Told from several points of view, the reader learns how complicated life is in China’s corrupt and changing world where people are expendable.

“Canada” tells the story of a pre-teen girl who cannot yet comprehend the world and the strange mixture of her white and Chinese cultures.  With her extended family growing all around her, she is mystified by the adults’ small talk and decisions.  On the cusp of adulthood, her innocence is quickly disappearing.

When a daughter goes home for her dying mother’s birthday in “The Lucky Day,” she discovers her mom is a fragile human being but also tough as nails.

“First Carvel in Beijing” is about a Chinese grad student visiting her white ex-girlfriend who discovers there is a new Carvel ice cream parlor in Beijing.  Reminding her of her young and innocent life growing up in America, the women indulge, not only in the sweet dessert, but in each other.

An aging father and his daughter share their truths and love for one another in “Shouting Means I Love You.”

My favorite story in the collection is “The Lucky Day.”  In this little snippet of life, the daughter, who believed she was her mother’s least favorite child, is now the only one who can help her dying mother.

The mother asks her daughter to commit suicide with her but when she refuses, the mother instead settles on going to the racetrack to bet on the horses.   For the first time, the daughter sees that her mother is much more than an ignorant Chinese immigrant from a small village, but a complicated woman not that different from herself.

In these brief and personal stories about identity, the reader gets insight into the changing and complicated world of China, the strict rules of honor and the challenging cultural differences.

In a subtly but powerful way, the stories also shed light on the horrors of climate change, cheap labor, government corruption and humanitarian crises that bring people to this country with hopes for a better way of life.

These stories shed light on how immigrants and their children — whether the first generation is born in the United States or brought to the country as youngsters — all struggle to fit in and find the cultural balance not just at home, but also within their communities and at work.