CARS3
Is anyone really surprised that Pixar’s latest offering is heartfelt, bittersweet, perhaps even poignant. After all, that’s the animation company’s auto-set mode. But with all the emotion embedded in these oddly humanized outsize toy vehicles, let’s be honest, it’s the incredible eye-popping animation and cool sound design that’s the real draw for this satisfying family film that has something for adults and older kids, but not a whole lot for youngsters beyond the bright always in motion swirl of colors and shapes. Are there many kids under the age of 10 that are concerned with issues of ageing? That’s the main theme running through this entry in the popular franchise.

Unexpectedly, Lightning McQueen (Owen Wilson is back with expressive voice work) is challenged by the passage of time and finds it difficult to continue participating in the sport that’s been his life’s passion. Luckily, McQueen befriends, Cruz Ramirez a young Racing tech whiz who has a plan. After the requisite twists and turns plus motivation from the late Fabulous Hudson Hornet, McQueen is back in the speedway game, but nothing is guaranteed when it comes to the checkered flag.

McQueen, a true champion, realizes that the only sure way to lose is to give up. Now, on Piston Cup’s largest speedway, old #95 risks it all to find out if he still has what it takes.

Looking back with the wisdom of hindsight, the first CARS was the best, but this third outing adds nothing of significance from CARS2. There’s also sense of redundancy to the racetrack set pieces as visceral as they sometimes are. However, even so, there is a patina of reality regarding the adult human drivers’ sense of competition and risk. Perhaps this is due to the friendship John Lassiter, head of Pixar’s and Walt Disney’s animation, had with NASCAR racer Jeff Gordon. The nice mix of authentic racing concerns beyond the issues of a midlife crisis is most welcome in this masterfully crafted film. If you’re an adult, and see this movie with younger kids, you will be more than amused, maybe even moved when you hear the voice of the late Paul Newman (recorded during the production of the first CARS) as the auto guru Doc Hudson giving encouraging advice to Lightning when the latter retreats to Radiator Springs to recover and connects with the spirit of his mentor. Nice touch. 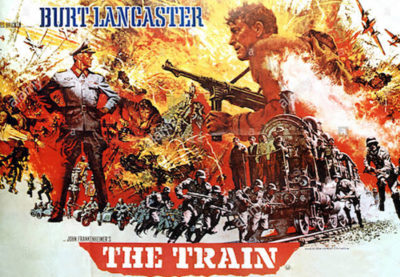 THE TRAIN (1964)
The initial home video release sold out, but this robust action adventure starring Burt Lancaster and Paul Scofield as unstoppable foes battling for possession of pillaged French art in director John Frankenheimer’s classic World War II thriller is available again, now in stunning 1080p hi def. Only 3,000 units available and when they are gone, they are gone!

Regarding this vivid melodrama, Variety said: “A colorful big scale adventure. It is the trains themselves and some bang-up special effects of bombing attacks and accidents that give this pic its main points.

Lancaster plays a workaday World War II era French trainman charged with ensuring that a cargo of irreplaceable French art – the pride and heritage of his nation – is not allowed to leave France, despite the Machinations of a Nazi officer (Scofield), determined to steal these great works for Germany.

Jeanne Moreau and Michel Simon co-star, and the dazzling black-and-white cinematography is courtesy of Jan Tournier and Walter Wottitz. The thrilling score is by Maurice Jarre (Lawrence of Arabia). Lancaster dominates the screen with his remarkable grace and physicality in what is certainly one of the iconic movies of the 60s. Big recommendation. Twilight Time Movies. Blu-ray. For more info go to www.screenerarchives.com