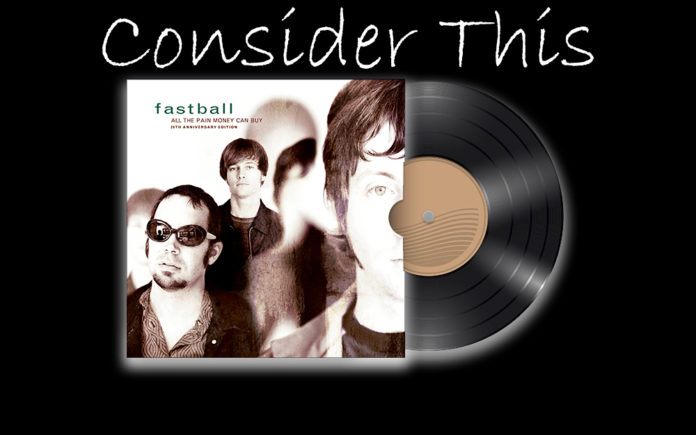 Musically, Alternative, Grunge and Hip-Hop all exploded along with Third Wave Ska, Brit-Pop, Neo-Soul, Electronica, Drum N’ Bass and House. Of course, we also suffered through the re-emergence of Boy Bands, the unfortunate hybrid of Rap-Rock and Lou Bega’s bastardization of Prez Prado’s “Mambo #5” re-fashioned as “A Little Bit Of Mambo.” (Admit it, it’s stuck in your head right now).

As the 20th century wound down there were a surfeit of one-hit-wonders clogging the airwaves. Crash Test Dummies’ “Mmm, Mmm, Mmm,” OMC’s “How Bizarre,” Len’s “Steal My Sunshine,” House Of Pain’s “Jump Around,” Chumbawumba’s …(well, whatever the fuck they were singing about…lager drinks, maybe). Lumped into this ignominious category is Fastball’s “The Way,” but it really shouldn’t be.

The Texas trio of Tony Scalzo (bass, keys, vocals), Miles Zuniga (guitars, keys, vocals) and Joey Shuffield (drums, percussion) came together in 1994, connecting through the fertile music scene of Austin. Miles and Joey had already made their bones in a band called Big Car. Tony had just relocated from Orange County, following a stint fronting The Goods. They cycled through a series of names, Star 69, Magneto, Magneto USA, Ed Clark’s Business Bible and Starchy, before settling on Fastball.

Honing their sound as they gigged around town, they quickly created a buzz. Soon enough they signed with Hollywood Records, a boutique label from Disney Studios. Their 1996 debut, Make Your Mamma Proud, came and went with little fanfare. But on their sophomore effort, Fastball partnered with producer Julian Raymond, (who in recent years made a name for himself providing sympathetic and symbiotic production for Cheap Trick and the late Glen Campbell). Recorded at the iconic A&M studios in Los Angeles, All The Pain Money Can Buy was released in early 1998.

The album was immediately embraced by critics and fans alike, their first single, “The Way,” went into heavy rotation on MTV and on the radio. Finally, the guys could quit their day jobs. Suddenly they were appearing on “The Tonight Show” and “Late Night With Conan O’Brien.” Within six months the record had sold over a million copies. Two other singles charted in the Top 40 and the band toured extensively with other late ‘90s chart-toppers, Everclear and Marcy’s Playground. They also earned a spot on the final H.O.R.D.E. Tour and were nominated for two Grammy Awards for Best Rock Performance By A Duo Or Group With Vocals (phew), and Best Long Form Video.

Now you’re probably expecting to hear that following the sudden success, the three-piece succumbed to “Behind The Music” excesses, snorting cocaine from exotic dancer cleavage, busting up hotel rooms, ingesting ants off the pavement, ( oh, wait, that was Ozzy). Maybe they allowed personal differences and raging egos to create an acrimonious split…but that never happened. Twenty some years later, Fastball remains a going concern.

Although they never achieved those meteoric heights again, they continue to make great music as evidenced by albums like 2000’s The Harsh Light Of Day, (their final effort for Hollywood Records). Keep Your Wig On arrived four years later from the Rykodisc label. 2009 saw the release of Little White Lies and their sixth studio album, Step Into Light came out in 2017. Perhaps, the guys keep their sound fresh by making time for solo albums and side projects. To mark the 20th anniversary of All The Pain Money Can Buy, Omnivore Recordings is re-releasing the CD and making it available on vinyl for the very first time.

As though someone is flipping the radio dial, ambient noise and snatches of advertisements open the album before settling on the opening bars of “The Way.” Insistent keys and a tick-tock rhythm give way to Tony’s soothing tenor as he unspools a saga inspired by the 1997 disappearance Of Lela and Raymond Howard. The elderly Texas couple left home one day and two weeks later their bodies were discovered hundreds of miles away in a ravine in Arkansas. The sprightly melody, which shares some musical DNA with the classic Elvis Costello track, “Oliver’s Army,” nearly camouflages the grim reality of the song.

The following track, coincidently the record’s second single, executes a stylistic 180 that completely ups the ante. Miles take the lead on “Fire Escape” and his vocals add a tinge of Dylanesque snarl. Jangly guitars wash over tensile bass lines and a pile-driving beat as he insists “Well, I don’t want to be President, Superman or Clark Kent, I don’t wanna Walk ‘round in their shoes…I can be myself, how ‘bout you?”

By front-loading the album with not one, but two hit singles, one might expect the rest of the record to head downhill. That’s definitely not the case. Tony and Miles split the songwriting duties pretty evenly singing lead on their own compositions. They manage to hit the sonic sweet spot time and time again. Tony is front and center on “Better Than It Was,” “G.O.D. (Good Old Days),” “Out Of My Head” and “Nowhere Road.”

“Better…” is powered by Joey’s stutter-y backbeat. Guitars strafe and shudder over lush organ notes and rubbery bass lines. The dynamics are positively Who-tastic, as the lyrics note “There’s nothing new about Money woes.” If the Plimsouls and the Partridge Family had ever collaborated, it might have sounded like “G.O.D.” Peppery horns accentuate an irresistible Bubblegum groove. The lyrics wax nostalgic for simpler times; “I’ve been thinking about the good old days, my silly clothes and my silly ways/Each drunken, drugstore purchase, each chemical advance, seven days a weekend every day the same old dizzy dance.”

“Out Of My Head” also happens to be the third single off the album; it went all the way to #8 on the Billboard charts. Churchy Hammond organ runs swirl around a rippling rhythm and angular guitar. Soul-searching lyrics offer this backhanded mea culpa; “Don’t matter what I say, only what I do, I never mean to do bad things to you/So quiet but I finally woke up, if you’re sad then it’s time you spoke up too.” The agile melody of “Nowhere Road” is buoyed by organ notes that split the difference between Tex-Mex and an “everyone skate backwards” roller-rink style. Skittery guitar and a snapback beat give the track ballast, and the road that he speaks of seems to be a tart reference to the vagaries of the music business.

Miles takes charge on “Slow Drag,” “Charlie The Methadone Man,” “Damaged Goods” and “Sooner Or Later.” With “Slow…,” countrified guitar licks flicker over a languid rhythm. The opening couplet, “Slow drag off a cigarette, slow drag and I’m lying in my bed,” is something of a cosmic exhale, but things quickly turn, um, homicidal; “all the world is sleeping like a baby tonight, I wanna see you dead, laying in the muddy ground.” Tempos shift on the break, exploding into a Psychedelic work-out

“Charlie…” spins the snarky tale of a drug-adled musician “living to get his freak on.” Stacked harmonies crest over portentous guitar, wily bass lines, liquid keys and a hint of cello. “Damaged Goods” sports ringing power chords, a chunky back-beat and tilt-a-whirl bass. Cryptic lyrics allude to a long-distance romance gone wrong. Meanwhile the Moog-y “Lucy In The Sky With Diamonds” keys open the suitably Beatlesque “Sooner Or Later.” Crisp and crunchy, it features the tandem time-keeping of pounding piano and pummeling drums, crackling guitar riffs and chiming Fab Four harmonies. Lyrics like “I’m gonna get under your skin sooner or later, I’ll find the key that lets me in, sooner or later” feel vaguely stalker-ish, but the melody is so infectious it’s almost beside the point.

The action slows briefly on Miles’ warm Country/Soul combo-platter, “Which Way To The Top” and includes a vocal assist from Poe, (remember Poe?), as well as “Warm Fuzzy Feeling,” Tony’s Baroque groover. Originally, the album closed with the spectral melancholy of Miles’ “Sweetwater, Texas.” Cinematic and yearning, it’s a bit of a sweet-sour lament.

The re-issue adds a plethora of bonus tracks, nine to be exact. Demos for “The Way,” “Fire Escape,” “Slow Drag” and “Sweetwater, Texas” are appropriately bare-bones. Both “Quit Your Job” and “Freeloader Freddie” were inexplicably left off the album. The former is a blast of Punk-tastic energy, the latter is sly and shambolic in all the right ways. Other cuts include an astute take on the Replacements’ classic, “Androgynous,” along with a surprisingly sweet version of Burt Bacharach’s “This Guy’s In Love With You.”

Twenty years on, All That Money Can Buy still snap-crackles and pops with authority. The music Fastball created here feels timeless. Chumbawumba, not so much.