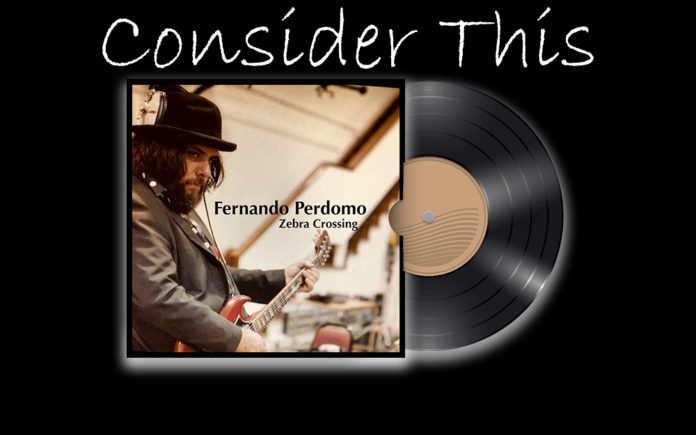 There’s earbud music and there’s headphone music. The former you hear, the latter you listen to. Fernando Perdomo makes headphone music. The singer-songwriter, producer and multi-instrumentalist is something of a musical Mad Hatter. Born and raised in Miami, Florida, he became obsessed with music as a kid.

Fernando fed his addiction by scouring thrift shops and flea markets in search of vinyl. Something of an auto-didact, he received formal training at at Miami Senior High School where he was a part of the prestigious Classical Guitar Ensemble and Rock Ensemble. It was there he made life-long friendships with like-minded musicians, Roger Houdaille and Chris Price.

In 1999, at the tender age of 19, his prodigious guitar skills could be heard in nationwide ad for Pier One Imports. Following stints in bands like Avenging Lawnmowers of Justice, Sixo, Trophy Wife and Dreaming In Stereo, he became an in-demand studio and touring musician. He traveled the world playing with well-known musicians like Ed Hale, Hilary McCrae and Andy Pratt.

13 years later he relocated to Los Angeles, released a solo EP and opened his own recording facility, Reseda Ranch Studios. Reconnecting with Chris Price, their first project was producing Linda Perhacs long-awaited follow-up to her 1970 debut. The Soul Of All Natural Things arrived 44 years after her first album, receiving rapturous reviews.

Fernando quickly made a name for himself working with artists like Jakob Dylan and Fiona Apple and legends like Todd Rundgren and Sam (as in Sam & Dave) Moore, as well as reclusive genius Emitt Rhodes and Power Pop/Glam Goddess Cait Brennan. Still, he made time for his own music, full-length albums like Picks, Warm and Voyeurs, plus myriad EPs and singles. His watershed record, The Golden Hour arrived in 2017. He indulged his jones for Prog-Rock by releasing his instrumental opus, Out To Sea earlier this year.

Recently he was given the opportunity to record at the legendary Abbey Road studios, and the result is his fifth long-player, Zebra Crossing. The record kicks into gear with the symphonic soundscape “I’m Here.” Violin and cello gather with a cumulus synchronicity, suddenly the clouds part and sunny guitar notes wash over a heartfelt declaration of love; “I’m here, won’t you open up the door, there’s so much we can explore.” It sets the tone for this majestic yet contemplative album.

Although Fernando made his reputation as something of a one-man musical army, he gets some able assists on this 12 song set. Two songs were co-written by Zak Nilsson, son of Harry and a talented musician in his own right. “Somehow” feels simultaneously lush and lonely. Spatial strings connect with wistful keys and plaintive vocals. The lyrics paint vivid picture of a cynic surrendering to love; “The efforts I’ve made, the loneliness bill that I’ve paid, day after day year after year/There was a time I thought love was a crime, fantasy nonsense written by fools.”

“Crown Of Stars” is a courtly waltz that shares some musical DNA with Jim Croce’s “Time In A Bottle.” It is powered by piquant guitar riffs, sparkly Mellotron and twinkly piano. The lyrics clearly speak to the loss of a parent; “Taking life day by day, watching you steadily fade away/You were brave….we fought back, knowing that nothing we fought for would last.” The grief and heartbreak is palpable. Zak provides sympathetic backing vocals.

Two tracks, “Sometimes I Feel Like Nothing At All” and “Smile” have a sun-kissed California flavor that recalls “Pet Sounds” era Beach Boys. Fittingly, the former was co-written with Steven Kalinich, a Peaceful poet and late ‘60s collaborator with Hawthorne’s favorite sons.

A slice of sharp sad sack-ery, it features insistent piano chords that shift from plinky to plunky to grandiloquent, over a stompy beat and a bleating string section. The lyrics seem to grapple with depression, but they also tackle bigger themes; “Do we always have to crash before we can fly, when will we stop living the lie for all the hatred and war that led us nowhere, the burden for us is too great to bear/We rise and fall consumed by it all, and sometimes it feels  like nothing at all.”

The latter is a piano-driven tone poem that is underscored by see-saw strings that swoop and dive. Pep-talky lyrics urgently exhort the listener to “smile even if it hurts.” Usually, this sort of “Hang In There Baby,” affirmation feels solipsistic, but here it just seems sweet. The song closes with a Beatlesque piano chord offers something of a cosmic exhale.

“We Were Raised With Headphones On” time-travels back to the era when music was so important the listener felt compelled to block out all extraneous noise. Intime vocals are accentuated by shimmery acoustic guitar, celestial strings and a drawling, kick-drum beat. Fernando waxes nostalgic for a time when “every day, a new favorite song,” our obsession allowed us the luxury of “dreaming in stereo, glued to the radio” and we “raised our voices to sing along.” The Yacht Rock-y solo on the break is smooth and stately in all the right ways.

Meanwhile, “Sunday” will make you homesick for your own childhood reveries. As a kid, Sunday was the day you reflected on the week’s experiences maybe caught a glimpse of the future. Evocative and introspective, this propulsive groover is anchored by a clip-clop beats and swathed in layers of strings and synths. This trenchant couplet says it all; “Sundays, just another Sunday, no need for metaphors, just sweet simplicity.” At the close of the song, Steven Kalinich delivers a stunning spoken coda that is beautifully bittersweet.

Other interesting cuts include the ethereal “Home” and two epic instrumentals, “Not Meant To Be” and the title track. Taking full advantage of his famously Fab surroundings, Fernando closes the record with an all-star take on “While My Guitar Gently Weeps.” It features vocals from Diane Birch, Shawn Lee, Jason and Daphna Rowe, (Diane and Shawn also play guitar), Dave Bainbridge on piano, Dave Kerzner on organ and mellotron, Mark Murdock on percussion, Paul Stacey on bass and Andy Mapp on drums.

Fernando has called this album his “love letter to Abbey Road studios.” But it’s more than an homage to a time or a place. Zebra Crossing is a sublime convergence of notes and chords that feels like a perfect pocket symphony.

If anyone could credibly bring back the Rock Opera format, it’s this guy. In the meantime, bust out the headphones and settle in for a good listen. Your ears will thank you.