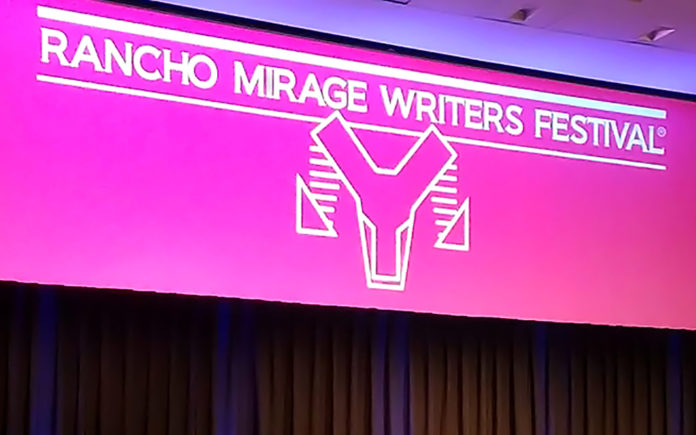 Some CV people know, while many others may not, that the Rancho Mirage Public Library & Observatory and the City of Rancho Mirage hosts one of the best-known and prestigious festivals in the country!  When passes go on sale in March, they sell out in a few hours.

It may be a surprise that it is not a festival of music, art, food or film.  It’s about authors.

Many attendees would argue the Rancho Mirage Writers Festival (RMWF) is not so much about books, as it is a celebration of writers and ideas!

Founder of the RMWF, Jamie Kabler, hosted the special evening, which included buffet supper and keynote speakers followed by dessert and coffee.

Festival favorite and bestselling author, A. Scott Berg, began his talk with acknowledging how amazing the RMWF is and how significant the festival has become in such a short time.

Berg praised the passion of the community for getting behind the festival and teased Kabler as, “Either a madman or genius.” Deciding on genius for the night, Berg said that Kabler is hard — if not impossible — to resist because of his dogged persistence, unrelenting tenacity and overwhelming charm.

Having recently finished World War I and America: Told by the Americans Who Lived It, as a curator and editor for The Library of America, Berg spoke passionately on the subject.  He shared that he read over a thousand works that from journals, memoires and personal letters that included Theodore Roosevelt, Woodrow Wilson, Edith Wharton, Nellie Bly, Oliver Wendell Holmes, Henry James, and many more.

World War I began in 1914 and ended in 1918.  This year marks the 100th anniversary of the conclusion of the First Great War, which Berg fears is a history that is being forgotten.

Berg talked about how a 19 year old, disenfranchised, Serbian national, a terrorist, started the war by assassinating Archduke Ferdinand because the assassin “lacked an identity” and felt no allegiance to the Austrian Emperor.  Berg spoke about the beginning of American nationalism and how the Hollywood industry was used to help sell bonds and generate propaganda to support the war.  America entered WWI April 1917.

If that wasn’t fascinating enough, to start the night, Karl Rove, author and former Senior Advisor and Deputy of Staff to President George W. Bush, and Bret Stephens, formerly a writer with the Wall Street Journal and now a columnist for The New York Times, discussed with moderator Geoff Cowen the importance of reading.

Stephens began with saying that great leaders are great readers.  He referred to Winston Churchill who won a Pulitzer for literature, and pointed out that President Ronald Reagan’s letters showed he was well steeped in political literacy.

Attending the RMWF for the first time, Rove proved to be a charming and witty raconteur.  Asked by Cowen if it was important that political leaders should read, Rove was adamant that they should.

Rove shared how he and President Bush had a New Year’s resolution to read a book a week in 2006.  Rove won with 110 books or 40 thousand words, to Bush’s 95 books or 37 thousand words.  To make the reading competition fair, Rove and Bush measured word count, book size and linier space!  Both men had so much fun; they agreed to continue reading another year.

When Rove spoke about Bush or other Presidents, he would frequently impersonate their voices — and pretty well.  With Rove’s Bush impersonation, he said Bush made the excuse for not winning their reading competition because he was “busy being the leader of the free world.”

Rove said that President Bush didn’t care what people thought of him or mind that people didn’t know he was reader.  Rove emphasized that Bush was a Yale graduate with a degree in history and has an MBA from Harvard.  Rove also said Bush read the bible every day, reading it through every year.

When Honorable Barbara Box and Honorable Gray Davis could not attend the “America Today” section of the program because of unexpected official business, the Festival added Amy Parnes, Senior White House Correspondent for The Hill and co-author of Shattered: Inside Clinton’s Doomed Campaign.

Switching it up, Cowan asked the panel if today’s political discord and disagreements are a permanent feature and if civility still matters.

Miller said, “When we lose civility, we dehumanize the other.”  Meachum added, “Civility starts at the top.”  Parnes revealed that for the first time as a reporter, people have started attacking her and her family personally.

Colson White talked about his award winning novel The Underground Railroad.   MacArthur Fellow, Viet Thanh Nguyen, shared The Sympathizer.  And Shaka Senghor spoke about writing and a life after prison in Writing My Wrongs.

The “Crime Pays” session included Scott Turow, Richard North Patterson, Greg Iles and was moderated by Linda Fairstein.  The bestsellers all agreed that writing may not be easy, but it’s a great way to earn a living.

While the heavy-hitters and political discourse of ideas is a fantastic facet of the festival, the RMWF always includes a variety of genres.

David Owen chatted about the adventures of golf; William Finnegan shared his love of surfing; and Douglas Brunt talked about playing tennis and being a Trophy Son.

Doctor Gregory Berns shared What It’s Like to be a Dog and Doctor Elisabeth Rosenthal discussed An American Sickness: How Healthcare Became Big Business and How You Can Take It Back.

James Andrew Miller, a contributor to Vanity Fair, The Hollywood Reporter, Newsweek, The Daily Beast and many more discussed the business of Hollywood.   Local resident Suzanne Somers and former Studio Chief Sherry Lansing shared their new books about their lives and spoke about women in show business.

RMWF “Angels” Bryn and Richard DeBeikes and Jeannette and Raymond Galante sponsored students from California Universities and the Coachella Valley.  These scholars are bright and curious with special interests in politics, journalism and creative writing.

Follett Book Store provided a well-stocked pop-up store filled with a plethora of titles from the festival’s featured writers.

There is so much wonderful content in simultaneous programs; the most daunting challenge is to schedule your day.  Meeting and chatting with a favorite author while getting your book signed is one of the key elements that makes the festival special, intimate and memorable.

This year the Festival moved to mid-week – Tuesday through Friday — instead of running over the weekend.  Every year the RMWF is better and operates with more sophistication, amenities and ease.

Some things never change.  Founder Kabler still uses a whistle, the weather is perfect, the ideas are endless and the conversations are rich and rewarding.

Passes for the Sixth Annual RMWF will go on sale in March.  Take a look at the website for details.  Consider being an “Angel” for cool perks and privileges.

Check out the Rancho Mirage Writers Series throughout the year, which celebrates renowned authors in the same spirit of the festival — and it’s free to attend.

For more information and passes check the website at www.rmwriterfest.org Sign up with the Rancho Mirage Library & Observatory to get email notices.