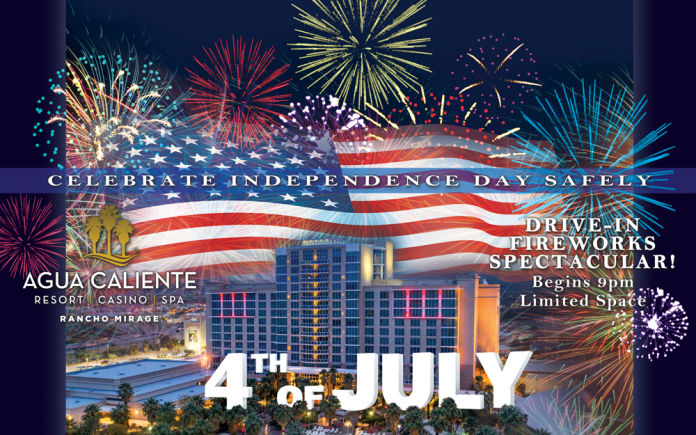 In a pre-pandemic world, July 4th celebrations would often entail large gatherings with family and friends, barbecues, and several fireworks going off in the sky. This year will not hold the same kind of celebrations as previous Independence Days, as cases of COVID-19 continue to surge throughout Riverside County in record numbers.

Many desert cities have cancelled their annual fireworks celebrations, including Palm Springs and Palm Desert. There will, however, be a fireworks show at Agua Caliente Resort Casino Spa in Rancho Mirage with synchronized music on Mix 100.5 at 9 p.m. on July 4th. The event has free parking and admission opening at 3 p.m.

“Who would have guessed a year ago that drive-ins would take on a whole new life?  But, here we are with drive-in graduations and weddings; continuing to find a way to living our ‘together but apart’ new normal. So, when we were faced with the choice to cancel the 4th of July fireworks show, those drive-in events came to mind, and with an event that uses the sky as its canvas, we knew we could do the event ‘together but apart,’” said Darrel Kammeyer, Vice President of Marketing at Agua Caliente Casinos.

It is recommended that attendees arrive early to secure a parking space, as this year’s show has a limited vehicle capacity of 350 parking spaces due to social distancing protocols and is anticipated to have a lot of viewers. Cars will be arranged to provide safe distances for families to view the fireworks, and all attendees will be required to wear their face-coverings while on property. 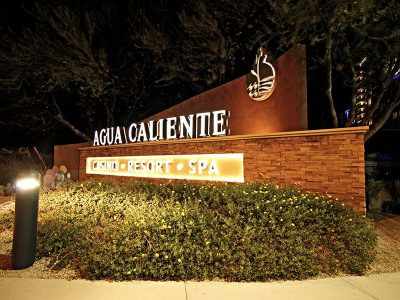 “We encourage guests to visit our website at www.aguacalientecasinos.com to learn more about all of the precautions Agua Caliente Casinos is taking during the COVID-19 pandemic including the use of MicroShield 360, the addition of an Agua Caliente Clean Team, and more,” stated Kammeyer.

Throughout the last few weeks, the cities across the Coachella Valley have experienced a string of illegal fireworks go off multiple times in various hours of the night. There have been numerous complaints and hundreds of calls made to local police stations to report the noise.

Fireworks that fly into the air or explode are banned in California and are classified as illegal and are never permitted to be sold or discharged. The three desert cities that are permitted to sell and discharge “safe and sane” fireworks are Desert Hot Springs, Indio, and Coachella, with Cathedral City just recently prohibiting the sale this year.

“Safe and sane” fireworks that are acceptable to be sold to the public only refer to fireworks that do not fly or explode such as sparklers, fountains, snake items, and spinners. Anyone caught using or allowing illegal pyrotechnics to be used on their property will receive a fine of $1,000 for the first offense, an additional $2,000 more for a subsequent offense, and an increase of $1,000 for each offense that comes after the second.

The negative backlash has been voiced by Coachella Valley residents about the illegal use of fireworks, citing not only safety concerns, but the well-being of those who suffer from post-traumatic stress disorder that might be triggered by the noise and animals that become frightened by the loud booming. 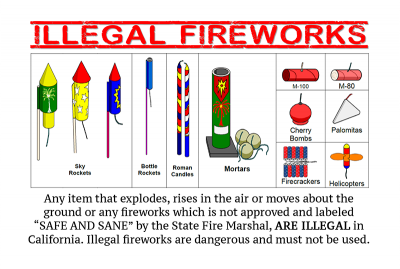 “Besides the fact that the fireworks are against the law, there is the disrespect factor to consider as well. I grew up in areas where fireworks were and are still available all year around, Florida being one of them. They have supermarkets that carry only fireworks. At that time, it was great. Times have changed and we’re not in those areas any more. Animals around here are not accustomed to the sounds of fireworks and gun shots. A lot of the people around here aren’t either,” said desert resident Brian Baker.

The sporadic fireworks have also affected La Quinta Cove resident Brigitte Gill’s four-year-old Shih Tzu, who has gotten into the habit of long fits of barking and seemingly developed a fear of the dark.

“The fireworks are infuriating, given that there has yet to be any good reason to set them off every night. Because of the constant booms, my dog is now having anxiety attacks whenever he hears something at night and ends up barking for hours, no matter what we do,” said Gill.

Some residents would be more accepting of fireworks if the circumstances were different. Palm Desert resident Ozzy Ashcraft notes that the kinds of fireworks used and the hours they are set off are factors that become problematic.

“If they weren’t going off at 2 in the morning, I wouldn’t have an issue with it. It’s people using the very powerful and dangerous fireworks during the cover of night that I have issues with,” explained Ashcraft.

Residents also take into consideration that while many families are confined at home sheltering in place, these fireworks are a means of celebrating the many graduations and upcoming summer holidays like Independence Day. There is, however, a fine line between celebrating and causing a disturbance to others.

“Everybody keeps saying it’s just people celebrating, but it definitely disturbs the peace and keeps everybody on high alert as we have to decipher between fireworks and possible gunshots,” shared downtown Indio resident Hanna Fickewirth.

While the 4th of July is very much a reason for celebration, please keep in mind the safety regulations in place regarding fireworks and the social distance guidelines involving gatherings this Saturday.