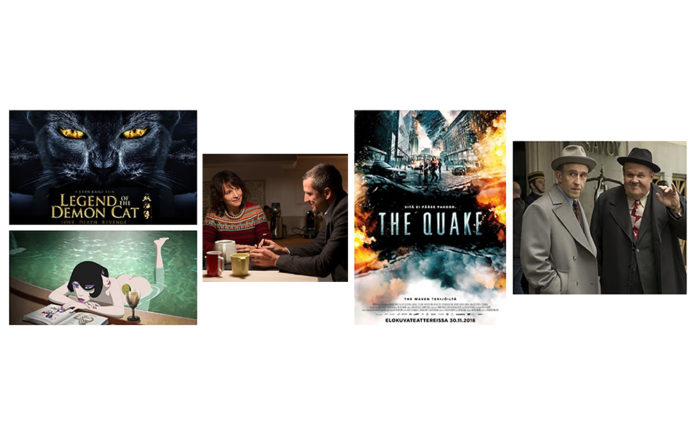 LEGEND OF THE DEMON CAT (China)
The stunning blockbuster of vaunting artistic ambition and a $200 million budget is at its heart a supernatural murder mystery so crammed with dazzling visuals of truly ravishing beauty that viewers are urged to surrender to this fever dream of cinematic excess that must be seen to be believed.

Writer-director Olivier Assayas mines a comedic vein that channels classic elements but always remains fresh and original in this seductive tale of sex, lies, and literature in the bohemian intelligentsia of the Parisian publishing world,.

Juliette Binoche and Guillame Canet star in this “buoyant, breezy delight” that traces the romantic and emotional fallout that results when a controversial writer begins blurring the line between fact and fiction, using his real-life love affairs — including a passionate fling with an actress who happens to be married to his editor — as fodder for his explosive new novel.

It’s been three years since 2015’s The Wave (A previous PSIFF entry).  Now the hapless geologist Kristian Eikjord is back to worn a doubting Oslo of an impending cataclysmic  earthquake.

This tense, well-crafted action thriller seems designed for those of us who dwell on the San Andrea fault.

Famous psychotherapist Ruben Brandt is forced to steal 13 paintings from some of the world’s greatest museums and private collections in order to prevent his ongoing suffering from terrible nightmares triggered from subliminal messaging he received when he was a kid.

Accompanied by four of his patients, he and his band of thieves hit the Louvre, Tate, Uffizi, Hermitage, and the Museum of Modern Art with great success.  Soon, “The Collector” becomes the most wanted criminal in the world.  The reward for his capture approaches a hundred million dollars.  Gangsters and headhunters chase him around the world while a cartel of insurance companies hires Mike Kowalski, a private detective and leading expert on art theft, to solve the “Collector Case.”