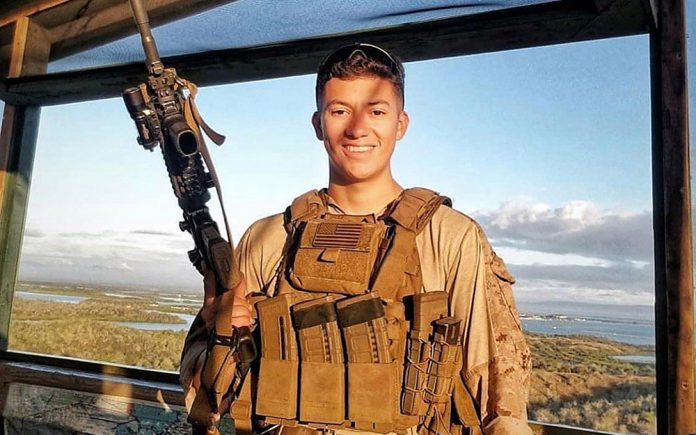 United States Marine, Corporal Hunter Lopez, the son of Riverside County Sheriff’s Captain Herman Lopez and Deputy Alicia Lopez, will finally be flown home and reunited with his family to be honored and laid to rest.

Hunter Lopez was killed in action on August 26, 2021 while serving as a member of the Unites States Marine Corps in support of Operation Freedom’s Sentinel.

Born on January 15, 1999 in Palm Springs, CA., Hunter is survived by his parents, Herman and Alicia, brother Owen and sister Trinity.

Hunter dedicated his life to service and took pride in being part of organizations with a rich tradition.  Prior to joining the Marine Corps, Hunter was a Riverside County Sheriff’s Department Explorer Scout from 2014-2017 for Post 507, where he obtained the rank of Captain.

Hunter served in the Marine Corps for four years; His first three years as part of the Fleet Antiterrorism Security Team Company A, 5th Platoon and most recently as a member of 2nd Battalion, 1st Marine Division, Golf Company, 1st Platoon, 3rd squad.

Hunter was devoted to serving others and perfecting himself in order to be the best Explorer and Marine possible. Whether at work or at home, Hunter strived for perfection, seeking knowledge and experience from those he respected and admired. When on leave, Hunter enjoyed being around family and friends and sharing his experiences with everyone. He lived life to the fullest and was often the reason why family and friends would bend over backwards to get together when he was around.

Hunter was a history buff and had many aspirations to pursue after completing his service to the country, among those was being part of a shooting and firearms company with several friends which is already underway and becoming a Deputy with the Riverside County Sheriff’s Department.

Always a fan of everything and anything Star Wars related, Hunter convinced countless friends, family and Marines to binge watch movies and would often quiz them on Star Wars trivia.  As a child, Hunter shied away from photographs and it was a challenge to get him to smile in most photographs. As an Explorer Scout and especially as a Marine Hunter seemed to flourish and developed an infectious smile and amazing personality. Hunter lived a full life in a short amount of time, he impacted so many lives and has left a lasting impression on family, friends, and his brothers and sisters in arms.

The procession and Funeral Services for Corporal Hunter Lopez are as follows:

Approximately 9:00 AM – A procession will begin from St. Francis of Assisi and travel past the following schools, which Corporal Hunter Lopez attended:

Once the procession is completed, Corporal Hunter Lopez will return to St. Francis of Assisi, where the public will be able to attend a viewing which will be held from 12:00 PM – 7:00 PM.

The Oasis room in the convention center will be open to the public to watch the ceremony on media screens in accordance with Covid regulations and occupancy requirements. Public parking is located on Avenida Caballeros.

Maximum capacity of 1,000 public members will be allowed. Masks will be required inside the convention center.

At the conclusion of the service, a procession will travel to Riverside National Cemetery, (22495 Van Buren Boulevard, Riverside) where Corporal Hunter Lopez will be laid to rest.

We encourage those who wish to pay tribute be advised of these procession plans and routes. We ask that the public remain on sidewalks and out of the roadways for the safety of themselves and the procession. The Riverside County Sheriff’s Department, with the assistance of allied agencies, will block/divert traffic at all intersections and high traffic areas. Please use alternate routes for any regular travel during these three days and time frames.