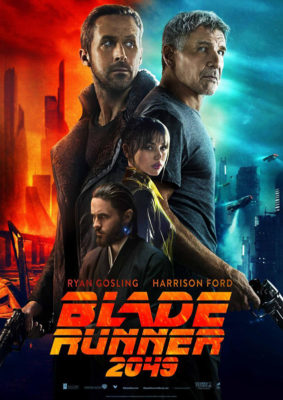 Just to get in the mood, I watched again Ridley Scott’s 35-year-old original (his “final cut”).  It’s a film I’ve seen and enjoyed scores of times.   It remains near the top of my movie list of meaningful films that not only dazzle the senses but also engage the intellect – the two things I most appreciate in a movie.   Scott’s brilliant movie adaptation based (kind of) on Philip K. Dick’s 1968 novel “Do Androids Dream of Electric Sheep?” that’s set in San Francisco after a global nuclear war.  Scott’s brilliantly designed and crafted Los Angeles set movie asks profound questions about life and what it means to be – and feel – alive.

A revered philosophy professor once sad to me, “Technology is a what humans have devised so the cosmos need not be experienced directly.”  I thought of that while watching the bleak and very long (nearly three hours) sequel.

I had high hopes and modest expectations for the much-anticipated Denis Villeneauve directed follow-up.  But I missed the substantive themes so beautifully explored in the original.  I did appreciate the production design of a cold, almost snowbound, Los Angeles.  Roger Deakins cinematography will probably get him a deserved Academy Award.

Screenwriter Hampton Fancher, who worked on the original, is back and sharing a credit with Michael Green.  Ryan Gosling plays “K” an LA cop and blade runner looking for original Blade Runner Deckerd (a robust, gnarly, Harrison Ford).  “K” needs to answer a mystery that has huge implications.  Or so he’s told.  Something about replicants procreating with humans?  I wondered if Gosling’s character was supposed to be Deckerd’s “replicant” child?  How interesting would that be?!

I did not understand the point of “K” having a replicant holograph girlfriend (a nice turn from Ana De Armas), other than, since it’s the future, “why not?”  It served no purpose.  There were numerous other similar paradoxical questions raised in this less than thrilling film that admittedly has dazzling visuals but so many oddly confusing and cryptic moments – especially after the midpoint — that remain ambiguous but do not deepen the subtext of the film – whatever that may be.

Space does not allow the pages that could be written about this film.  Suffice it to say, the dazzle is there, but so is the disappointment.  This joyless, technologically advanced and mostly dehumanized future is not a welcoming place for non-replicants. 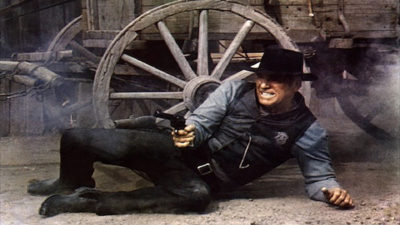 England’s Michael Winner direct this gritty, old school western that features Burt Lancaster as a determined, deeply moral marshal who vows justice against a band of killers led by rancher Lee J. Cobb who went on a drunken shooting spree with his hands and accidentally killed an innocent old man in his town.  He goes to the nearby town of Sabbath, to confront the uncaring populace and the killers in order to uphold the law no matter what the cost.  Gerald Wilson’s terrific properly cynical screenplay does not shrink from thoughtful, intelligent dialogue that engages in this great looking, classic western – the kind that is rarely, if ever, made these days.

The incomparable Robert Ryan co-stars along with Robert Duvall and Sheree North.  The fine score by is from Jerry Fielding.  I loved this expertly cast, overlooked minor classic solidly in the archetype -bending mode of The Wild Bunch and Unforgiven.  Twilight Time Movies.  Blu-ray.  Limited edition, only 3,000 units. 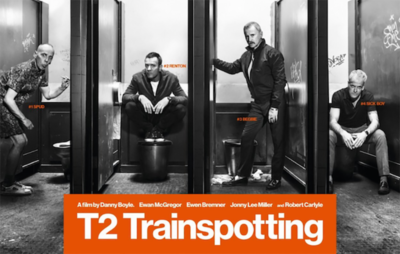 I never expected a sequel to Danny Boyle’s 1996 hit movie about what a bunch of Scottish smack addicts are up to today.  Nor did I really care all that much.  But since my job is to submit an honest report on the film, I gave it a chance.   And I was surprised.

Not unlike the original that was based on Irvine Welsh’s novel, this new iteration is more a series of incidents as opposed to an over arching plot or single storyline.

When Mark Renton (Ewen McGregor) returns to the only place he knows as home, he reconnects with his old crew — Spud, Sick Boy, and Begbie (Ewen Bremmer, Johnny Lee Miller, and Robert Carlyle).

The moments with the returning characters we first met a little more than 20 years ago, suggest these disreputable rapscallions are facing the tricky negotiations of middle age realities and perhaps even mortality itself  — but with their basic natures intact.  The mix of comedic and poignant set pieces does not dilute the unexpected profundity of the more memorable moments.  Waves of emotions — and narcotics – wash over the proceedings.  In my own life, I felt all the loss, fear and friendship on display.  After final fade out, I thought, if life is about managing love, hate, regret and longing, then perhaps it’s the glue that unites us as humans.   And if so, that’s what makes this movie worth watching.  One more thing, be sure and use the subtitle option because the Scottish accents are almost impossible to understand, but fun to hear.