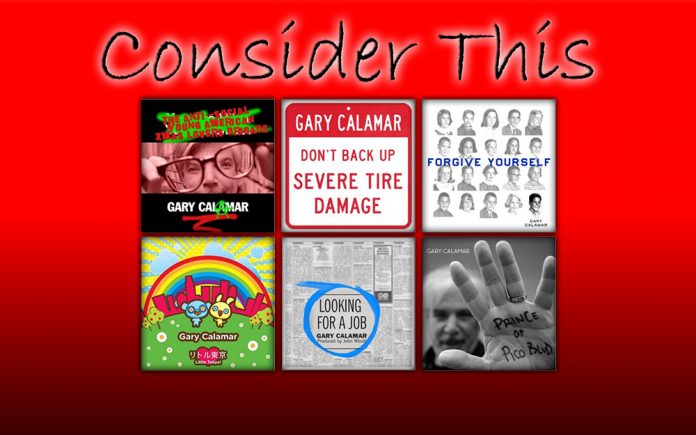 Chances are, if you discovered a song or artist you love through a television show, you should probably send a thank-you note to Gary Calamar. The five-time Grammy Award nominee has been the music supervisor for landmark series like “Six Feet Under,” “Weeds,” “Dexter,” and “True Blood.”

Gary grew up in New York and his obsession with music began during childhood. At the age of eight, he and his brother Ronnie (along with the rest of America), had their minds blown when the Beatles performed on “Ed Sullivan.” Captivated by all the British Invasion bands, he spent many hours long after bedtime, huddled under the covers, glued to the radio.

As a teen, he visited his local record store every day after school. (Decades later, he cemented his affinity for record retail by co-writing “Record Store Days: From Vinyl To Digital And Back Again” with Phil Gallo. The lavishly appointed tome included a forward from former record store manager and R.E.M. guitarist, Peter Buck). By the time he was in college, he had picked up the rudiments of guitar.

With an eye toward a career in the music industry, Gary relocated to Los Angeles in 1979. He began working and later managing iconic record stores like Licorice Pizza, Moby Disc and Rhino Records. Pretty soon he shifted into band management, managing local favorites The Balancing Act.

It was the mid ‘80s and The Balancing Act had signed with I.R.S. Records, the same label that broke bands like the Go-Go’s and R.E.M. The four-piece recorded an EP and two long-players filled with quirky, complex and erudite music. Despite unanimous critical acclaim and a passionate fan base, they never achieved commercial success.

Ironically, right around the time The Balancing Act was breaking up, Gary had begun writing songs, mostly for his own amusement. Pretty soon he was coaxed onstage and his music was well-received. Playing around town at clubs like Largo and the Alligator Lounge, as Gary Calamar And His Imaginary Friends, he was mostly solo, but was sometimes accompanied by (future Baby Lemonade guitarist) Mike Randle.

Staring in the early ‘90s, He began volunteering at KCRW, L.A.’s premier public radio station. After a couple of years at the station, an overnight time slot opened between Saturday night and Sunday morning. He pleaded for a shot at the spot, the program director consented and “The Open Road” was born. Gary’s show drew on his vast musical knowledge, his affection for the British Invasion era, as well as Country, Folk, Jazz, Punk and singer-songwriters like Elvis Costello, Robyn Hitchcock and Warren Zevon. It was there he honed his interview skills with chatting up superstars like Tom Jones, Rufus Wainwright, Brian Wilson and members of the Zombies. The show proved so popular it soon shifted to the more coveted time slot, Sundays, 6pm to 8pm.

By the end of the decade he had connected with G. Marq Roswell and the pair worked as music supervisors on films like “The Slums Of Beverly Hills” and “Varsity Blues.” A few years later, he and partner Thomas Golubic were given the opportunity to supervise music for “Six Feet Under.” The buzzy black comedy/drama was the creation of Academy Award-winning screenwriter, Alan Ball.

Gary and Thomas’ music selections were pitch-perfect, matching frenetic Garage Rock from the Amboy Dukes, poignant Folk from Joni Mitchell and emo-alt. rock from Death Cab For Cutie to score pivotal moments at the Fisher Family funeral home. The series finale, featuring Sia’s song “Breathe Me,” was not only the perfect synthesis of music and film, it truly launched the Australian chanteuse’s career in America.

Once that show ended, Gary and Thomas went their separate ways. On his own, he became a part of another Alan Ball/HBO collaboration, the wildly popular “True Blood,” which ran for seven seasons. Iggy Pop, the Godfather of Proto-Punk was a fan and actually expressed an interest in recording a song for the show. Gary took a chance and submitted “Let’s Boot And Rally,” a song he’d co-written with James Combs. Iggy loved it and recorded it as a duet with Best Coast’s Beth Consetino. Impressed by Gary’s talent, the sinewy Stooges front-man encouraged him to record and release his own music. (Who amongst us can resist Iggy Pop?)

In 2014, Gary released a six-song EP, You Are What You Listen To, via the Sedan Zero/Atlantic Records label. By turns, sly sardonic and slightly sentimental, the effort showcased his wry vocals and sharp songwriting. The Extended Play sold respectably and received glowing reviews.

In the last few years, Gary has slowed down a bit, which has allowed him to spend quality time with his wife, Alice and daughter Zoe. Still, he continues to curate the Mimosa Music Series, a monthly live music showcase at the Federal Bar in North Hollywood. Recently, he has supervised TV series like “Here And Now,” “Wayward Pines,” “Wilfred,” and “Alex, Inc.,” as well as upcoming seasons from “Cobra Kai,” “Titans” and “Uncle Frank.”

Two years ago, he parted ways with the increasingly corporate KCRW and landed at the more artist-friendly environs of KCSN 88.5. Rather sporadically, he has released a single here and there, which have been available from different digital platforms. This column has collected them all together as a virtual EP.

The first couple of tracks, “Little Tokyo” and “The Prince Of Pico Blvd,” offer sideways homages to his adopted hometown. The former is a shimmery slice of ‘80s Pop perfection that blends shivery strings, jangly guitars, tensile bass lines, a rock steady beat and sha-la-la backing vocals. Gary quickly cuts to the chase and requests the pleasure of his daughter’s company as they venture to the Far East(ern) part of L.A. to sample the culture and tradition of Japan; “Hey Zo, come on let’s go, hop on the Kawasaki, we’re goin’ to Little Tokyo, Yes Way, today is the day, we’ll check out the manga and the anime, Princess Tutu and the Swan Ballet.” Sweet and playful, the song’s final verse still makes time for a little fatherly reassurance; “Hey Zo, I want you to know, the road is wide open to go anywhere you wanna go, that feeling inside, it’ll be your guide/And if you ever need me, I’ll be by your side, so hop on up for a beautiful ride, you never know…”

The latter opens with an off-kilter backbeat, ringing guitar riffs, plaintive keys and twinkly percussion. Here, Gary nonchalantly reveals a bit of his not-so-checkered past; “Well, I came from Boogie Down town, and I made my way west to the coast/I could tell you some stories about past glories, but I really don’t like to boast.” Although he descends from royalty, he’s not above a little double entendre; “Hey, Hey, Hey, he’s the angel in the architecture, Hey, Hey, Hey, he’s the ghost in the machine, hey, hey, hey, you think you know him but you can’t be sure/He likes to keep his engine clean….if’n you know what I mean.”

Although it was written just a couple of years ago, the workman-like “Looking For A Job” feels tailor-made for these precarious times. Anchored by a crunchy, four-on-the-floor stomp that seems to signify pounding the pavement, the melody is powered by dour keys and urgent guitars. Gary’s saturnine perspective pivots between prospective boss; “I hope we can teach you to cover your tattoos, and play by the rules,” and eager applicant; “I’ll be a barista, a teamster, a captain of industry, any chance of a health care and retirement plan?” A surprisingly smoky harmonica on the break is bookended by wiry bass lines and some jagged guitars.

Gary is at his most sardonic on a couple of tracks. “Severe Tire Damage” dates back to the Imaginary Friends days, but it’s aged like a classic car. The affable melody is fueled by gritty guitar riffs, spinning keys, rubbery bass lines and a slip differential beat. The lyrics provide traction for a slick and slippery world, insisting we proceed with caution, without dwelling on past mistakes; “And yeah, the objects in the mirror may be closer than they appear, and I’m not saying have no fear/Just pick up the rear, C’mon pick up the rear.”

Meanwhile, on “The Anti-Social, Young American Christmas Lovers Brigade” windmilling power chords and thrummy bass lines are wed to tick-tock beat. Not necessarily an ode to the Baby Jesus’ birthday, it’s more of a blasé nod to the pageantry that surrounds December 25th; “We hate waking up in the morning, just let us dream away/Yeah, we rarely have a good morning, unless it’s Christmas Day.” Beatific backing vocals are juxtaposed by a face-melty guitar solo and chiming bells on the break. Although the word Christmas is in the title, it’s unlikely that Fox News will adopt it as a holiday anthem.

Closing out the set, Gary’s latest song, “Forgive Yourself,” is probably the loveliest composition in the copious Calamar canon. (Ah, alliteration…). Over strummy acoustic guitars, swooping, synthesized strings and a see-saw rhythm, he dials back on the banter and kind of bares his soul. The opening line; “It was the longest day, in the coldest month in the year that I got old,” is enveloped in sadness. Moanin’ the Covid Quarantine Blues, sleep seems like the ultimate panacea; “I don’t blame it on my youth, I don’t blame it on the boogie, but the paint is starting to crack, am I what I was before, or what I became/I got a box full of worries and a case of regrets, that I gotta unpack, so I roll right over and try my luck at dreaming again.”

A million years ago, Gary dreamed of a career in the music industry and he made that dream come true. It didn’t happen overnight, but through hard work, diligence and dedication, and on his terms. Not many people can channel their passion into a vocation. To top it off, the guy writes great songs, rife with sharp lyrics, indelible melodies and hooks galore. Sometimes nice guys finish first.