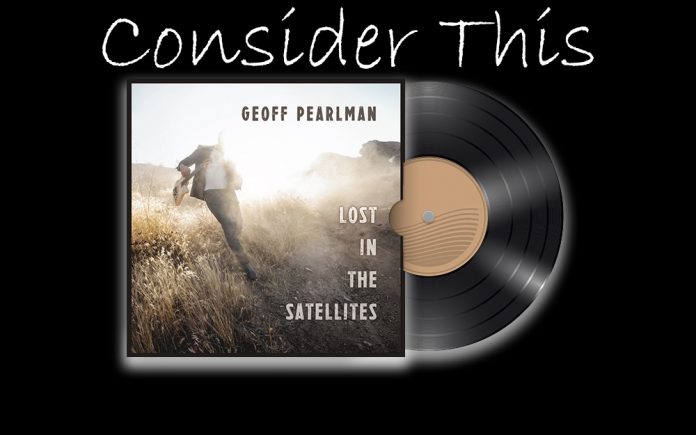 “I’d like to think that I always could let things take me where they would, and though I’d like to settle down/Something keeps me off the ground, and you know I’d like to stay and understand, but I just don’t think I can.”

That’s Geoff Pearlman offering a bit of romantic equivocation on “Never Land,” a song from his great new album Lost In The Satellites.

Geoff Pearlman has been a stalwart presence on the L.A. music scene for nearly two decades but his musical epiphany arrived at age nine, following a Kiss concert. As a kid, his family hopscotched from Ohio to Indiana, Texas and Pittsburgh Pa., before settling in Omaha Nebraska. Drawn in by Kiss’ theatrical stagecraft, Geoff decided music looked like the most fun career path.  He began guitar lessons in earnest.

He came by his musicality naturally, both grandmothers played Classical piano, as did his mother. His parents would sit at the piano together (“like Archie and Edith Bunker”), and both would sing as she provided musical accompaniment. Geoff estimates early exposure to the Beatles and George Gershwin shaped his sense of melodicism. Coming of age in the late ‘70s and early ‘80s, he worshipped at the altar of the Kinks, Led Zeppelin, Neil Young and the Rolling Stones, as well as ‘70s era singer-songwriters. As a teen, he took a deep dive into the eccentric oeuvre of Todd Rundgren, which inspired him to start writing his own music. Pretty quickly he started documenting his nascent compositions on a four-track recorder.

By high school he was part of a band (The Tolerants), and they actually self-released their own cassette. The music was raw, rough and primitive, but everyone starts somewhere. Geoff formally furthered his musical education when he attended Berklee College of Music in Boston. Following school he began his career in Boston and then relocated to San Francisco.

By the dawn of the 21st century Geoff was in Los Angeles, arguably the epicenter of the music industry. In the ensuing 20 years he made a name for himself as a session guitarist, working with everyone from Joan Osborne, Jon McLaughlin and Jill Sobule to Disney productions like “Hannah Montana” and the “High School Musical” trilogy.

As a composer, he has created music for television series like “Fuller House” and “Jag” along with several independent films. He has also worked behind the scenes as a producer and engineer, most recently for Jimmer Podrasky and Syd Straw’s critically acclaimed EP, and acclaimed guitarist Marc Ribot (Tom Waits, Elvis Costello).

Geoff was guitarist in the Echo in The Canyon band that included fellow guitarist Fernando Perdomo, bassist Dan Rothchild, drummer Matt Tecu, Jordan Summers on keys and Justine Bennett on backing vocals. They are featured throughout the film performing classics by the Beach Boys, Buffalo Springfield, the Byrds and the Mamas and the Papas. Lovingly curated, the documentary was a critical and commercial success.

Throughout the years, Geoff has released a couple of solo albums, his 2002 debut, Anything At All and 2005’s Somewhere Like Nowhere EP. Somehow in the midst of all his commitments, he has managed to carve out time to record a third effort, the recently released Lost In The Satellites. The eight-song set opens with the buoyant “Give It A Go.” A Power Pop pep talk, it’s powered by a woozy Moog synthesizer, rumbling bass lines, see-saw guitars, glittery keys and a walloping beat. Threaded through this aural tapestry are honeyed harmonies and a sturdy baritone sax. Much like the kitty poster, feel-good lyrics advise us to Hang in there, Baby; “And if you do the best with what you’ve got, you’re gonna hit it when you take a shot/It’s coming for you ready or not, so give it a go.”

Both “Enough” and “Waiting For the War” offer succinct jeremiads aimed at our addiction to technology. The jangly chord changes, warm wash of organ and plaintive melody of the former wrap around this brittle observation; “It’s such an easy thing, getting tangled up inside all the uneasy things, that’s enough for me, that’s enough for now, that’s enough for today/I’ve got enough information, and I can finally see, that the way things are going to going, the less I know the happier I’ll be.”

The best songs here stack together, one after the next. “I Still Look For You” aches in all the right ways. Pensive vocals are matched by wistful guitars, searing violin, high lonesome pedal steel and a percolating beat. The winsome arrangement quietly cloaks lovelorn lyrics that obsess over an erstwhile romance; “I still laugh at things you used to say, and I go drinking where your band would play/And I go hang out in the square, and I hope that I might see you there.”

If the Beatles and Gram Parsons’ International Submarine Band ever collaborated, it might sound something like “I’m Your Man.” The arrangement blends reverb-drenched guitars, soulful Wurlitzer notes, tensile bass lines and a leapfrogging tom-tom beat. As the action accelerates on the chorus, Geoff resembles something of a caffeinated Leonard Cohen pledging “I’m your man, and if only for a moment you would come along with me, see how good your man could be/I’m your man, your knight in shining armor, your king and your clown, if you need me you know I’ll be around.” A jittery pedal steel solo hammers the point home on the break it’s British Invasion meets Cosmic American Music.

Part bitter post-mortem, part confessional mea culpa, “No Remorse” is a study in melancholy. Willowy guitars fold into shuddery keys, thrumming bass and spatial percussion. Mostly, Geoff hedges his bets by promising “Should all this slowly drift off course, lost in the satellites, and everything we’ve accomplished here vanishes overnight, should our goals end up in divorce/I think by now you’ll know, that when it’s time to go, I’ll only show you no remorse.”

The balance of the album is made up of the aforementioned “Never Land,” which feels like Geoff’s origin story (every superhero has one). Liquid arpeggios feather over cascading piano notes and weepy pedal steel. The opening couplet; “I hit California with a broken heart, things got off to a pretty rough start, once again/I found a band but we never rehearsed, so I packed the van up and threw it in reverse…” feels intimate and cinematic. The song conjures a classic (Laurel) Canyon vibe that echoes progenitors like J.D. Souther and Jackson Browne.

The record winds down with “The Veil.” Dissonant guitars connect with saturnine strings, subdued bass and doleful pedal steel. Spare lyrics quietly sketch a portrait of grief; “The morning breaks at noon, and memories of her soon slowly find their way back to him.” On the break the tempo shapeshifts, mirroring the ethereal sturm und drang that Kate Bush employed in her classic cut, “Breathing.” It’s a delicate denouement to a dazzling effort.

Geoff co-produced the album with Jon Evans, who also played bass and Rhodes piano. They were ably assisted by Mathias Bossi and Matt Chamberlin on drums, Jim Cox on piano, Wurlitzer and organ, James Cruce on percussion, Rich Hinman on pedal steel, Michael Bluestein on Moog synthesizer, Alex Budman on baritone sax and Karla Kihlstedt on violins and vocals.

Lost In The Satellites is by turns melodic, erudite and insistent. Geoff Pearlman’s songs are like aural snapshots, capturing a moment in time, ephemeral, yet everlasting. Sometimes that’s all we have.