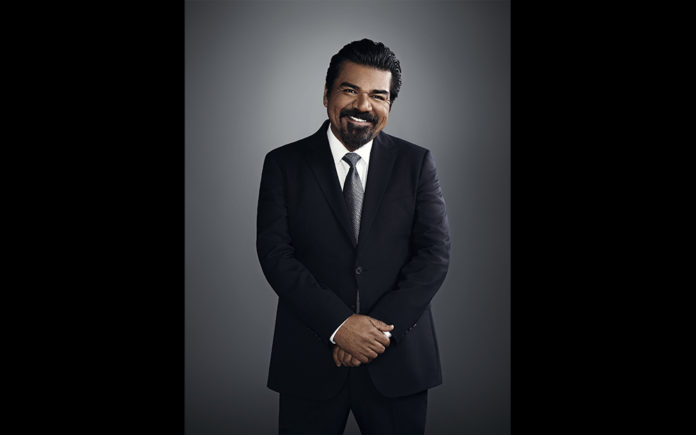 Whether it’s on stage, on screen or in this case, on the phone, George Lopez is never afraid to say what’s on his mind. And the El Chicano star does so in a way that provokes both thought and laughter.

The multi-faceted comedian, actor and producer brings The Wall tour to Fantasy Springs Resort Casino’s Special Events Center on Friday, May 31st at 8 p.m. In a recent interview, the part-time La Quinta resident touched on a variety of topics, including his comedic influences, going up against the Avengers at the box office, selfie culture gone awry, and his time as host of the Bob Hope Classic golf tournament. Just like in his stand-up act, Lopez didn’t pull any punches.

Why comedians are “idiots”…

LOPEZ: “I never considered myself a political comedian. I’ve always been more observational humor, pop culture… The politics in my act, in The Wall, has evolved over almost two years now. It’s shed a skin or two. It’s not very political at all. It’s almost back to being observational. It’s not changing anyone’s mind and I don’t want to change anyone’s mind. It’s like I say, ‘why do you listen to comedians — we’re idiots?’ We’re the ones that didn’t get good grades and made fun of other people. We’re not scholars, most of us are idiots. We just happen to have a sense of humor.”

The humor in hard work…

LOPEZ: “Out in Indio and out in El Centro, La Quinta, Palm Springs, the majority of things that get done, get done by immigrants and Latinos. I didn’t know my biological father, but my grandfather worked hard. I would see him covered in mud from digging ditches… so when I’d see something that’s not right, I just decided to put it into the act. I’m not going to change anybody’s mind, but there is humor in working hard. I had a joke where I said my father was a migrant farmworker but my grandfather told me he was lazy. I asked him, “How can you be a lazy farmworker?” He told me, “he just picked enough lettuce for himself.”

LOPEZ: “When I was growing up Cheech [Marin] lived in Granada Hills, and I grew up in the valley, San Fernando, Mission Hills, which is less than five miles from Cheech. He was one of one of my heroes, so it was inspiring. You know, Richard Pryor, Freddie Prinze, Cheech and Chong, Eddie Murphy, Chris Rock. Those guys.”

Hating someone for their beliefs…

LOPEZ: “Comedy and politics go hand-in-hand from way back. From Mort Sahl and George Carlin, to Jack Parr and Johnny Carson, it goes hand-in-hand. But the difference [today] is, you never hated someone for being political. You might not like their political views but you didn’t hate them. Now we’ve become a society where it’s not about ‘I don’t like that.’ It’s ‘I hate that, and I hate them.’ And that’s what the real issue is.”

The minefield of entertainment, comedy and sports…

LOPEZ: “It’s like they told Lebron [James], ‘just shut up and dribble.’ It’s ridiculous. Did anyone tell Kareem Abdul-Jabbar that when he became a Muslim? Did they tell Muhammad Ali? No. But now we’re a society where a person who is a sportscaster or political commentator can say, ‘Shut up and dribble.’ Which is ridiculous! It minimizes the guy’s career and minimizes the guy… That minefield of entertainment and comedy and sports, I liked it better when we didn’t have to take a political view. I hope we go back to that.”

LOPEZ: “You know, the Bob Hope tournament didn’t like — well, here it is — you’ve got the board of the Bob Hope tournament, that were around when Bob Hope was around, and then the year that I did, were incredible. And then it never got back to that. When Bob Hope did it, it was amazing… They were hanging out, having parties, out there playing golf and having a great time. And then when I did it, they didn’t like it. That’s what the tournament was. And then it went away. The last year I hosted was 2008 — I played it 2004 ’05, ’06 — it never got back to the way it was in 2008. Jimmy Kimmel played, Jimmy Fallon played, Anthony Anderson played, Clint Eastwood played. Nobody could do that. I knew them all personally and they all came out. And now it’s (expletive) Builders Liquidator or some hardwood company or dot-com — whatever it is, it isn’t the way it was when I had it. They cut their nose to spite their face, and it was a great tournament.”

Why “El Chicano” was no match for “Avengers: Endgame”…

LOPEZ: “The Avengers don’t have to worry about people going to see ‘El Chicano.’ Big movies hurt small movies. So did it help that it came out the same weekend as ‘Avengers’? It’s ridiculous. It underperformed but it’s not the movie it’s the competition. It’s not even competition — it’s the Avengers. It’s the highest grossing movie of all time, and here’s this little movie.”

Being too old for random selfies…

LOPEZ: “I saw an older lady the other day at the airport taking a selfie and throwing up a peace sign. But it’s just her sitting at the airport. It’s kind of like how you can never tell a woman her clothes are inappropriate, but I’m sorry, you’re too old for that.”

Having your carrot cake and eating it too…

LOPEZ: “[The Wall] is more about how we’ve become as a society. You know how everyone now wants to know where the food comes from, if the chicken was humanely put down? It’s like, ‘yeah we pet him until he died.’ Everyone wants to live forever but no one is going to live forever. So when you’re there lying on your deathbed and your life is flashing before your eyes, what are you thinking about? That you didn’t have carrot cake when you wanted it?”

We Will Rock You — Saturday, October 12th