When there is an accident with a DUI, the DA often takes months to investigate the case BEFORE filing the DUI charge. The DA rarely sends a notice to the driver when the case is eventually filed. Thus many drivers incorrectly assume there was no filing and that they have a current VALID LICENSE. Many drivers go to court on the appearance date noted on their citation and when there is no filing they think they are clear.

The California Supreme Court has ruled in essence, that people are not stupid and should know when their license is VALID. If you get cited/arrested for a DUI your license is taken from you and a pink piece of paper is given to you explaining your license is valid for 30 days… and then suspended for about 4 months. You should contact DMV and request a DMV hearing within 10 days and request a STAY…which freezes the suspension.

However without the STAY, if you drive after the 30 day period you are driving on a suspended license. For this you could be sentenced to 10 days or more in jail for a 14601 VC……Driving on a Suspended. It is a Misdemeanor!

Thus California does not have to give a Notice of the Suspension of your CDL. Every state is different relative to the notice requirement. In many states they do NOT have to notify the driver that their license is suspended. 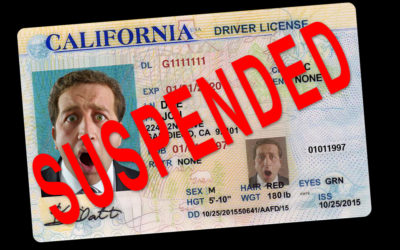 After a DMV FINDING on a First time DUI Hearing or after a 1st time Court Conviction, the Sacramento DMV suspends your CDL for 4-5 months. After the 30 day suspension you can get a restricted license to drive to and from work and classes. However the driver must first show proof of enrollment in the 1st offenses DUI’s classes, file an SR 22 and pay a reissuance fee to DMV.

After a DUI license suspension of an out of state license, only the driver can request a Termination of Action from DMV to request a SET ASIDE. It is not automatic and the lawyer can no longer request it. DMV believes if they send the paperwork to the Driver’s out of state address the driver will get the mail in another state and not at their local lawyers office. We ask our clients to make the request and we take it from there.

The basis for requesting this Termination of Action is that the driver lives in another state and can’t take the DUI classes in California. With respect to notification, neither the California court nor DMV will contact the out of state DMV.

Instead the CA DMV (but not the courts) will enter the CA DUI conviction/finding into the NCIC system/California Driver’s records and it is up to the other state to look it up i.e. PULL IT off the record. This is where it sometimes falls through the cracks. With respect to the court we request the court allow you to take an online DUI CLASS. The court may accept it but the DMV will not.

The CA DMV PULLS info on a regular basis, but some states do not, though legally they are supposed to do so. That is how they get their tax dollars.

The bottom line is to hire a local DUI lawyer who can protect your license.