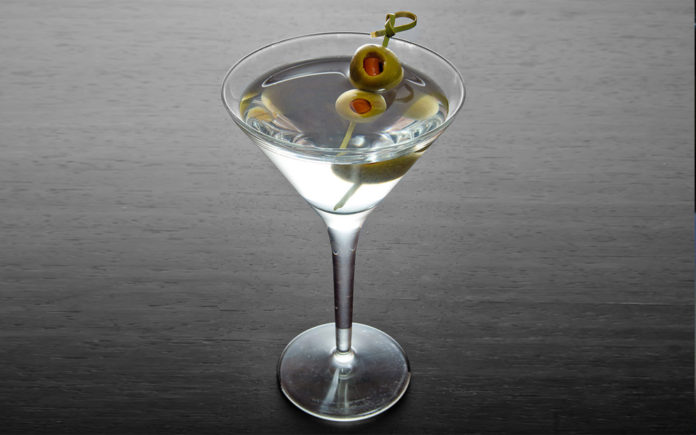 I’ve always been a big gin fan. So, therefore, while we’re at it—a big Martini lover. I’ve never appreciated a vodka Martini. If there’s any vodka involved, it better have been infused with juniper berries and whatever other variety of botanicals my favorite gins have historically included.

And I know back in the day, our hero, James Bond who did everything cool and suave, did gaffe when he simply ordered a shaken vodka Martini. What was up with that?! Ian Fleming—shame on you!

What do you think?—there’s nothing sexier than a Martini. Its sleek appearance in a chilled glass reeks of class and allure. And you can’t contemplate Palm Springs without imagining the cocktail. And for me, the super charging & fueling effects of the gin’s juniper essence is in a class of its own.

Gin was most likely made first in Holland or Belgium but totally embraced by England in the 1600s because any decent Brit would have his portion accompany him to the ever-expanding colonies around the globe, toting also some quinine, limes & lemons for good health.

This combo engendered two of the most important cocktails on earth: the Gin &Tonic and the Martini; so, as we often do—let’s clear off the wine bar, and, pour a gin cocktail for the next couple of columns.

Clean and clear alcohol permeated with juniper berries and a variety of other botanicals: Gin is still made this way today, and each brand has its own recipe and techniques for infusion. While all gin has some juniper flavor, the other botanicals can include a wide array of herbs, vegetables, flowers, fruits, spices and even tea.

Always a fan of the Tanqueray, Bombay & Beefeater, I’ve recently tried some new stuff on the market. And—by the way, what’s with this “Navy Strength” phrase I see bantered about.

Well—Four Pillars, a small Australian distillery, proudly established in 2013, produce a line-up of gins, of which one is called Four Pillars 58.8 Gin Navy Strength. Their website tells us, “Let’s go back to the 18th century. Gin was thought to be panacea to many things encountered by those sailing the high seas. Officers of the Royal Navy began to suspect their supplies of gin were being diluted by avaricious distillers or dodgy wholesale merchants.

And so it became known a Navy Strength. After a time the officers of the navy used this simple test to ensure they were getting gin of the proper strength. In fact, it was gunpowder proof.” All right then, 114 proof is the number.

Four Pillars Navy Strength tasting comments include, “added are fresh ‘Judy’s Everbearing’ native finger limes alongside our beautiful organic oranges which highlight the Asian spices like coriander and star anise, and are complemented by the fresh ginger. Then turmeric adds weight to the palate and a fresh but earthy quality, not unlike dill.”

“This fresh citrus goes into the botanical basket, with some fresh ginger, giving our Navy Strength Gin its signature power and intensity. The resulting gin has lifted aromatics of lime curd, pine needles, and fragrant spices with a vanilla character which pulls it all together. The palate is intense, sweet and juicy—but it is still very clean.” 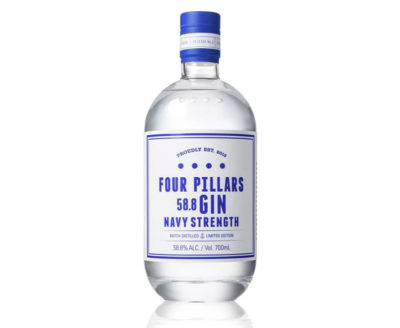 Another less expensive “Navy Strength” gin is one by the 3 Howls 114($24); a Seattle distillery, 3 Howls is on the sweet side with a noticeable lemon aroma and flavor that is well balanced with juniper. The company tells us, “the Navy Strength mixes well in cocktails that you’d rather not have watered down with the other mixers. It’s also a very suitable choice for any cocktail that you’d add lemon or a lemon garnish when you have no lemons.

For those Francophile fans, we have a French gin called Citadelle ($28). The story of Citadelle Gin as we know it today began in 1980’s, but the brand is steeped in history that dates much further back. The original recipe was developed by a distillery in Dunkirk in 1771—at the time an important port for the spice trade.

Skip forward a few hundred years and Citadelle Gin is now produced in Cognac, the birthplace of another fine spirit and home to a few other French gins.

The production of this gin is absolutely unique with the 4th distillation done using equipment and methods no one else uses anymore. Nineteen botanicals are added and it is distilled in a quite small (200 liter) cognac copper pot still using naked flame with minute attention to detail.

It’s a complete departure from your usual gin. First point being juniper is not the first and defining characteristic but is present among cardamom, licorice, cubeb, cassia, savory, and grains of paradise wrap around nutmeg and citrus peels, with star anise lingering around the edges extremely complex, savory bouquet; makes a Martini of unparalleled complexity.

And by the way, that “three Martini lunch” was a real thing back in the 60s and 70s, before there was a cop at every corner.  In my legal practice days, and especially when I’d go out and lunch with judges in the Los Angeles area, they were all taking down three Martinis—you’d see a lot of them sleeping while on the bench in the late afternoon. Amusing!—Cheers!