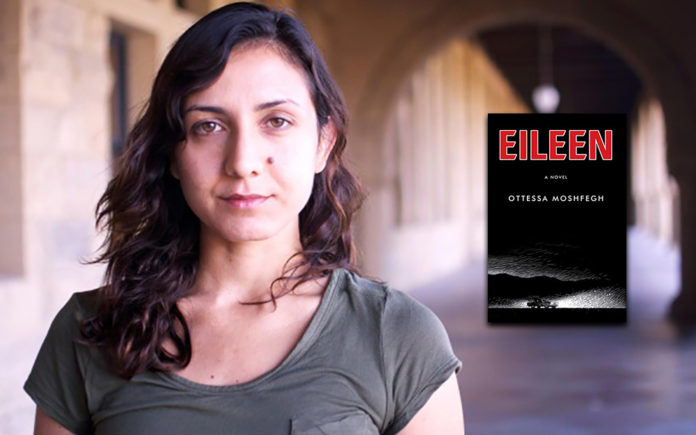 When you consider the age of the earth like a clock, humans have been here for less than a minute.  Human beings are but a pixel in the expanding universe.  Not everyone will leave behind a lasting mark.  For most of us, it will be as if we never existed.  In Ottessa Moshfegh’s Eileen (Penguin Press, 260 pages), one girl recounts her life and its one remarkable event.

The story is narrated by protagonist, Eileen Dunlop, who, as an older woman, recalls her life at age 24.   Set days before Christmas in a snowy New England coastal town she refers to as X-ville, Eileen recounts the events that lead up to her sudden departure.

Eileen shares that she was an awkward young woman raised in a dysfunctional, conservative Catholic family.  Her older sister Joanie had the good looks and outgoing personality.  Eileen’s parents consider Joanie a slut because of her interest in boys, so Joanie moved away leaving Eileen to cope with her alcoholic parents.  When Eileen went away to college, she thought her life might change, but she was soon called home by her father to take care of her dying mother.

Eileen wore her mother’s old clothing and never took care of her hygiene or spent time on her looks.  She supplied her father with booze and her only escape was her drafty attic bedroom with a mattress on the floor where she could read back-issues of National Geographic – and — her secretarial job at the local boys prison!

At the prison, Eileen was in charge of organizing visitations.  She liked watching the boys and their sorrowful mothers.  She fantasized and stalked one of the prison guards.  A virgin, Eileen could only imagine what sex was; it was never explained to her.

When Rebecca, a Harvard graduate, comes to the prison as a teacher, Eileen is overcome by the elegance and sophistication of the woman.  Rebecca notices Eileen right away and befriends her!  Eileen and Rebecca quickly bond over drinks and a mutual interest in one of the young prisoners.

On Christmas Eve, Eileen is invited to Rebecca’s home.  When she arrives, she sees it is a place completely out of character for the beautiful and smart Rebecca who is behaving strangely.  Disillusioned, Eileen is about to leave when Rebecca reveals she needs Eileen’s help to save one of the boys at the prison.  There has been a terrible injustice and Rebecca wants to right the wrong done to the boy by his mother. As bizarre as the situation is, Eileen reluctantly agrees to help!

Author Moshfegh does an amazing job creating Eileen’s bleak and ignorant world.  The story is compelling because even the character as an adult, lacks a complete understanding of her past circumstances and its impact on her psyche growing up in her home.

Eileen is a woman – a person – who goes through her whole life unseen and unloved even when a crime is committed.  Eileen’s character reveals her story as a way of being seen – look what I did – I exist/existed.  Moshfegh creates a multi-dimensional person who is broken but has survived to confess her one extraordinary life experience.

Moshfegh writes beautifully and it is her prose and deep character study that keep the story utterly involving.  Then, on page 222, the reader gets a jaw-dropping plot twist – a real shocker — that pushes the story over the top in an exciting and surprising way.  However, with less than 40 pages left in the novel, the ending loses some of its power and impact on its characters.

Eileen, like most of us, looks at her life in retrospect, which gives her perspective. Even the name “Eileen” has subtle context.  Although she has nothing and no one on which to “lean,” her name contains the sound “eye” as in “sight and seeing,” as well as the personal pronoun “I.”  In Moshfegh’s story, Eileen becomes the center of her universe when she finally embraces and tells her secret narrative.

Is Eileen’s life story significant?  Did she do something worth reporting?  Maybe or maybe not.   No matter how unimportant humans may be in the big picture, whether we are seen or unseen, we all make some impact however minuscule during our time on the planet.