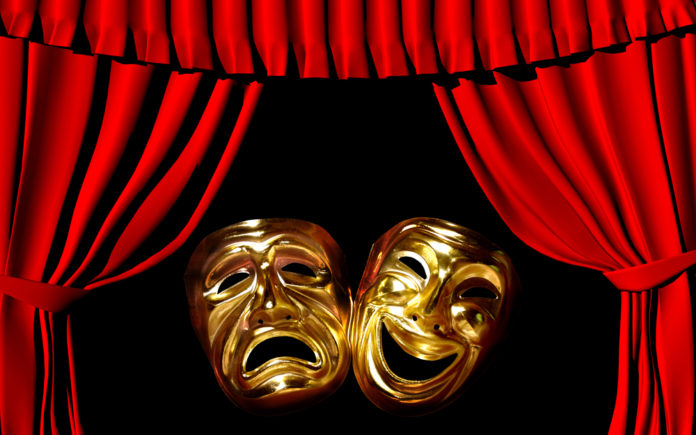 “Art is a nation’s most precious heritage. For it is in our works of art that we reveal to ourselves and to others the inner vision which guides us as a nation. And where there is no vision, the people perish.”   –President Lyndon Johnson, on signing into existence the National Endowment on the Arts

When the followers of Dionysus, the Greek God of fertility and wine, began their ceremonial rituals of dancing themselves into frenzy and devouring the raw flesh of sacrificed animals, there probably wasn’t the realization that they were on the precipice of creating a cultural entity that would thrive and survive the centuries.  It was Dionysus followers who structured a form of drama, singing and dancing in coral form and telling the stories of Greek myth that provided the foundation for the rich and creative art we know as Theatre.

Theatre began in ancient Greece with a religious ceremony called ‘dithyramb,’ (a poem, chant or hymn of ancient Greece sung by revelers of the festival in honor of the god Dionysus,) and in which a chorus of men dressed in goat skins were the first to create this ageless art. The word ‘tragedy’ actually comes from a Greek expression meaning ‘goat song.’

In the 6th Century, a Priest of Dionysus by the name of Thespis, introduced a new element into the mix when he began dialoguing with the chorus and in effect he became the first actor. Comedy, Tragedy and Satyr (Satire) plays all took many shapes over the centuries as they weaved their way into western culture.

We’ve made a lot of progress in the Centuries since goat skins were a regular part of the production.  Theatre was introduced to American culture during the establishment of our original thirteen colonies. The birth of professional theatre in America is said to have begun when Lewis Hallam, arrived with his theatrical company in Williamsburg in 1752. Lewis and his brother William, who arrived in 1754, were the first thespians to organize a complete company of actors in Europe and bring them to the colonies along with a repertoire of plays popular in London at the time.  Shakespeare’s, The Merchant of Venice, was their first performance, shown initially on September 15, 1752.

Why is it that Theatre has maintained such a critical role in contemporary culture, despite the growing popularity of film through out the twentieth and twenty first Centuries?  How has Theatre managed to stay so relevant?

As part of the 2014 Theatre Center Group’s Conference: Crossing Borders, Dr. Kevin Brown stated in his piece, “The Top Ten Reasons why Theatre is still important in the Twenty-first Century,” that the number one reason was that Theatre helps us to develop our creativity.  As our education system increasingly puts an emphasis on science, technology, engineering, and math, we cannot forget the importance of art.

Theatre is educational and a great way to learn. Going to the theatre teaches us about people, places, and ideas to which we wouldn’t otherwise be exposed.

Theatre is a cultural space where society examines itself in a mirror.  Theatre helps us understand people from cultures other than our own.

Theatre teaches us about ourselves and our history and how to express ourselves more effectively. And most importantly, that we are human and that the performance of theatre is a universal cultural phenomenon that exists in every society around the world.

I grew up in Ohio.  A Midwestern state that was home to my blue-collar family who were primarily Steel Mill workers and Auto Mechanics.  Outside of my high school drama class, I wasn’t exposed to theatre or its cultural significance.  It wasn’t until I was a young adult that I discovered my love of this art. I felt as if I had stumbled upon the yellow brick road with so many adventures ahead.  There is nothing that compares to the excitement of watching a live performance and being a part of an art that is almost as old as time itself.

Theatre is a magical world that educates, creates and allows a common, human experience that is unique in that moment.  Every show is live and will never be experienced exactly the same way again.  No matter if you’re a child growing up in the Midwest or an educated observer on the West Coast, there is one common thread that is shared… and that is the magical art of live theatre.