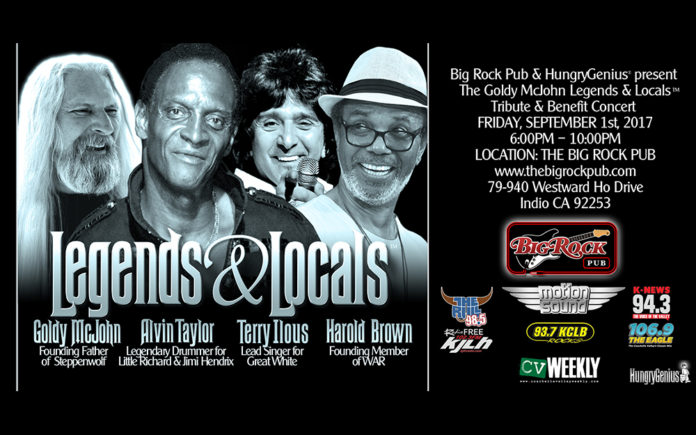 We were deeply saddened to announce the passing of Goldy McJohn, Founding Father of Steppenwolf. His legacy is as golden as his name, and his influence will live on, deeply embedded in rock and roll as we know it today, as well as in our hearts. This concert will now also be a celebration of Goldy’s life and contributions, with many of his colleagues and family members in attendance. Big Rock Pub and our partners are committed to make a show worthy of him and all those who loved him, and love him still.

Tickets for the Legends & Locals Benefit Concert , supporting Goldy’s dear friend and legendary drummer, Alvin Taylor, were scheduled for Sept 1st. Goldy was busy finalizing the set list and was very excited about the upcoming show. Tickets went on sale Sunday, July 30th. Goldy passed suddenly on Tuesday, August 1st. At the urging of his family and the friends performing with him, it is our responsibility, obligation and our mission to make this show a beautiful, unforgettable tribute to his life and accomplishments.

Terry Iluis (Great White) and Harold Brown (Founding Member of War) will perform along with special guests, Greg Douglas (Guitarist for Steve Miller Band), Jeff Paris on keys and Hammond B3 (Cinderella, Lita Ford, Vixen), and Carmine Rojas (Performed/Toured with David Bowie, Rod Stewart, Tina Turner, Stevie Wonder, Patti Labelle, Al Green, Eric Clapton, Billy Gibbons, Ron Wood – to name a few). This is a once in a lifetime gathering of brilliant musicians joining forces to celebrate the lifetime achievements of a man who’s star is long overdue as well as show their deep love and appreciation for a brother lost.

Alvin Taylor launched his career in his very early teens playing for Little Richard and went on to play with world renowned artists such as Jimi Hendrix, Sir Elton John, George Harrison, Eric Burdon, and Sly & the Family Stone (and that’s the short list).  Taylor is also well known in his community for his heart for the local music scene’s young, up-and-coming artists, and has mentored many.

John Raymond Goadsby, known as Goldy McJohn, was a Canadian keyboard player best known as the original keyboardist for rock group Steppenwolf. Originally a classically trained pianist, he was a pioneer in the early use of the electronic organ (Hammond B3) in heavy metal. He was also an avid golfer.