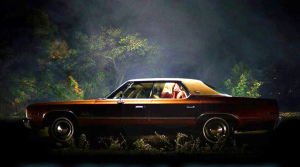 The art of fear is a delicate and difficult thing to master. For me, the mounting pressure of “nameless dreads” is far more disturbing than a menacing predator with a knife and a ski mask, buckets of blood and severed body parts. So I was pleased to be jolted by this out-of-the-blue horror thriller that grabbed me at fade in and didn’t let go until final fade out.

A common conceit of teen horror movies is that when a character has sex, he or she is likely to get whacked as a kind of cosmic punishment. This movie takes the trope a big step further. Set in Detroit, Jay (Maika Monroe), a young woman, has sex with a handsome stranger and discovers she has inherited a strange curse: No matter where she goes, there are shambling, nearly naked ghosts that follow. And make no mistake, they want her dead. Jay recruits her friends for help, but she soon learns that the only way to remove the curse and escape death – or so she hopes – is to have sex with someone else. 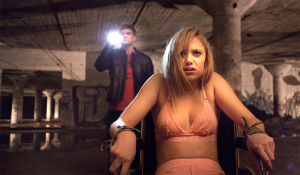 But still, only she can see the deadly phantoms that are closing in. Now Jay is forced to make a very difficult decision in the hope she can survive her deadly nightmare creatures that don’t think, feel or give up — they follow! If stylized horror is your thing, you’ll love this moody and terrifying little gem written and directed by David Robert Mitchell. The exquisite, atmospheric cinematography is by Mike Gioulakis.  As the poster accurately reminds, it’s a horror to haunt your waking hours.  Now playing and recommended. 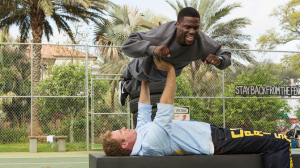 Will Farrell is James, a clueless and very white crook who lives an opulent life-style of ridiculously wretched excess with a fiancée (the always good Alison Brie) who is also his boss’s daughter. Indicted for his shady shenanigans, but claiming his innocence, he turns down a plea deal and gets a 10-year San Quentin sentence that he must begin serving in a month.

Abandoned by his girlfriend and her father, a desperate James turns to Darnell (Kevin Hart), his only black acquaintance. Darnell washes James’ car in the office garage of his workplace and James automatically assumes he’s an ex-con. He hires Darnell to help harden him in preparation for a prison life of gay sex assaults and abuse.

Rude and crude in the extreme with lots of cringe-worthy jokes and bits of business, most based on racial stereotypes and “gay-panic” humor, the audience I saw it with was divided in its appreciation. Some laughed hard but many sat in stone faced silence. I was among the latter.

I did like the crazy, almost sweet friendship between the characters played by Farrell and Hart and I loved the timely, on-target observations about racial disparity and how we incorrectly assume the worst of some people based on appearances. I can’t really describe the most objectionable scenes in this PG paper, but they push the envelope for an R movie, in my opinion. You can get the gist of this film from the trailer. Actually seeing the movie adds nothing. Etan Cohen is the co-writer and director. Caveat emptor.  Now playing. 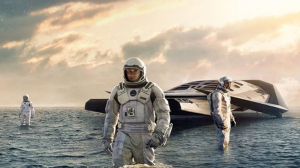 Christopher Nolan’s epic space quest was a global hit in spite of mixed reviews. Co-written with his brother Jonathan, the film stars Matthew McConaughy as Coop, an astronaut who travels through a “wormhole” that some entity apparently placed near Saturn as a doorway to a place that could offer salvation to a dying earth. Set in the near future, the adventure plays with notions of time and space and the mystery of love itself. Unnecessarily talky at times, the verbosity is balanced with stunning imagery – a Nolan specialty. Co-stars include Anne Hathaway, Michael Caine and Jessica Chastain. After multiple screenings, there remain (for me) number of unanswered questions about the mission and the science. But it sure got me thinking, even though much of the strange astrophysics has been widely discussed over the last 20 years or so. A second disc offers multiple featurettes on the movie and the theories behind it.  Paramount.  Blu-ray 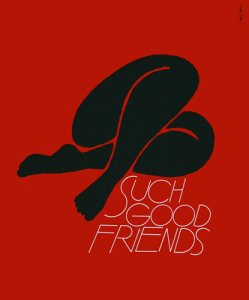 No less than Otto Preminger directed this decidedly black comedy about a wife (Dyan Cannon) who considers her husband’s unfaithfulness when he goes to the hospital for minor surgery. But when she discovers his secret date-book, she gives herself permission to have her own affairs. Meanwhile, her husband’s routine surgery has complications and he dies. A fine cast (Jennifer O’Neill, Nina Foch, James Coco, Laurence Luckinbill and Burgess Merdith among others) fleshes out this odd, throwback (1971), cynical adult comedy of manners and morals. There is one unexpected but memorable moment when Dyan Cannon’s character poses in the nude and for a few frames we see the results in a full frontal Polaroid that almost fills the screen.  Olive Films.  Blu-ray.