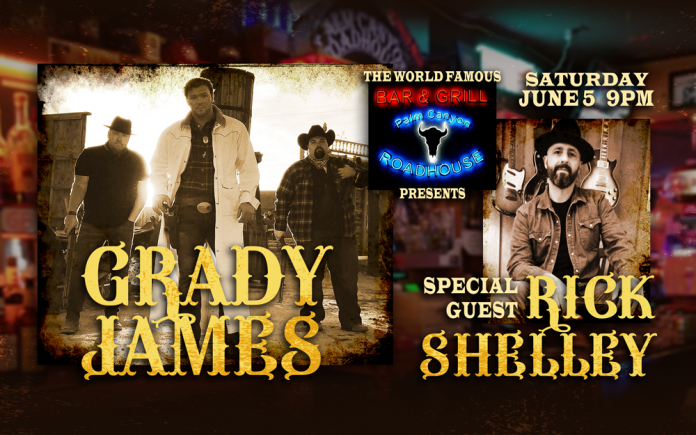 With this week’s announcement that Stagecoach, California’s Country Music Festival, will be making a triumphant return April 29, 2022 – May 1, 2022, we fortuitously feature, arguably the best Country artist to ever come out of the desert, Mr. Grady James! Talk about someone who’s earned his way to the Mane Stage.

Now I may have lived a majority of my life in the City of Festivals, Indio, California but I know great Country music when I hear it. I was born in Lubbock, Texas, so I have some sort of street cred. Believe me when I tell you, Grady James and band are on the precipice of mammoth musical greatness.

James’ new single, Try It All (2021), has everything I want in Country music; melodiousness, substance, great hooks, catchy choruses, a body-moving tempo and a beer-drinking sentiment. Listen to it now on Spotify and Apple Music!

We saddled up next to James, his bandmates, Tim Johnson and Adam Nounnan as well as Americana ace Rick Shelley to find out what’s cookin’! These fine gentlemen will be performing together at Palm Canyon Roadhouse at 535 S. Palm Canyon Drive in Palm Springs on Saturday, June 5, 2021, at 9 p.m. You can purchase tickets on eventbrite.com. For more information you can call (760) 327-4080.

CVW: You now have three formidable songs available for the public to enjoy the Grady James sound. The singles game seems to be working for you but when will we see an EP or album? Asking for a friend (me) 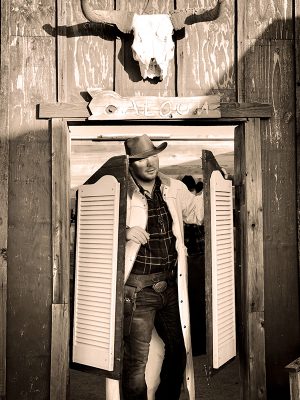 James: “Yes, I have three songs out now! I am very excited about all three of them for different reasons. Going Home was the first one, and a very personal song to me after losing my dad. Born Again Country was the first song that I wrote and produced with Adam Nounnan and Tim Johnson. Now after what we all went through in 2020, I felt like Try It All was the right one to come back with. I haven’t released an EP or LP yet but it’s not for lack of material. I had two full-length records already recorded before 2020. We delayed releasing them as we couldn’t tour to promote them. Adam, Tim and I went out to a secluded lake house and wrote and recorded five more during quarantine. Try It All was one of those five. I have done everything from production to distribution myself, so I’m looking for some help before I release a full record.”

CVW: I hear a graceful blend of Honky Tonk, Outlaw Country and Rockabilly in your music. Have you developed your sound instinctively or is there a more conscious effort to achieve the sound?

James: “I work as a record producer in Nashville so I find a lot of sounds in the studio by helping other artists achieve their sound. I guess I have achieved my sound by kind of cherry-picking sounds that I have liked while making other records for people along the way.”

CVW: Try It All is the new single and I love it! It’s fun and danceable. The song seems to send the message that we should do more and do it well. What can you share about your intent in the lyrics? 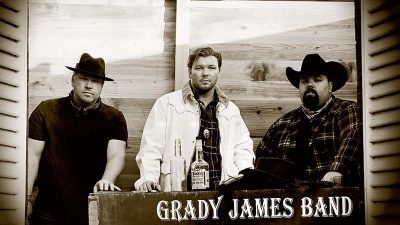 James: “Yes, I wrote Try It All during a particularly divisive time last year. I was just watching the news and playing downtown in Nashville. And what I experienced playing music for people, of every different background, and what I was watching on the news just didn’t add up. From my experience everyone is pretty like-minded and just wants to ‘try a little bit of everything before we’re gone’ to quote my own song, ha-ha! So I wrote this song as a statement to say I don’t care much about the reason people divide anymore. I am just trying to ‘try it all’ like anyone else.”

CVW: In many people’s minds you are such a unique songwriter, voice and musician. That’s really the trifecta to have, isn’t it? Being a student of music as well as a connoisseur, what more would you like to conquer?

James: “Ya, I feel like my reputation has evolved over the years. I earned a degree from the Musicians Institute for guitar performance and moved to Nashville as a guitar player. I got to play guitar on some of the biggest stages across the country for some great Country artists. Then an artist Gyth Rigdon was runner-up on NBC’s The Voice and he released a song I wrote called Proof I’ve Always Loved You which went to #1 on the iTunes/Apple Music Top 100 Country Chart and was top 5 on the All Genre Chart. After that my reputation was as a songwriter and now I’ve mainly just produced records this year. I love doing it all. Some people only know me as a singer and some who call me a producer don’t even know I can sing. I am just happy to be making music.”

CVW: You and the band have a show coming up on June 5th at Palm Canyon Roadhouse in Palm Springs, CA. What has the High/Low Desert meant to you in your career? 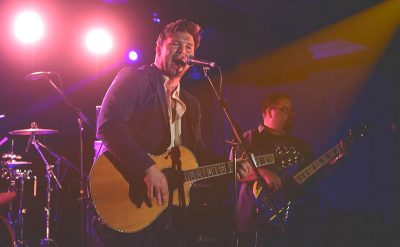 James: “Yes we are excited to be playing there again. The scene here in the desert has been a truly awesome thing to be a part of. I think I speak for Adam and Tim as well when I say winning ‘Best Country Band’ and ‘Best Male Vocalist’ at the 2019 Coachella Valley Music Awards was a big high point! Even when I am back in Nashville, everyone knows about the Coachella Valley and Joshua Tree. I wear coming from the desert as a badge of honor.”

CVW: You’ve kept your band tight in Tim and Adam. What are the benefits of keeping it a trio and what do you want to share about these two classy dudes that others may not know about them?

James: “Well, I suppose something that you probably already know about Tim and Adam is that Tim works with AVIR, Inc. and Adam is a realtor for BHGRE/Leaskou Partners and they are part of the desert community even when they are not playing shows. Tim, Adam and I are more than just bandmates, we are all great friends, like a family. I am an independent artist and I simply could not do everything myself. My mom, Lynne Arnold, another beloved member of the desert community and my biggest fan, was the only one helping me with my career when Adam and Tim joined the band. You may know that they are in the band but you probably don’t realize that they help with everything from booking shows to writing songs.”

We asked James’ bandmates how they feel about being a part of the Grady James Band.

Tim Johnson (drums): “Being a part of this project with Grady has been very fun for me personally. I needed that rebirth, ya know? I wasn’t doing much at all band-wise. We’ve been at it now for 5 years and watching it develop musically is pretty exciting and gaining great friends out of it is even better! Grady, Adam and I have truly bonded like brothers.”

Adam Nounnan (bass): “There’s so many reasons why I love being a part of this band. I’ve been close friends with Grady since high school and I have always played bass guitar for him in every project he has going. To be in the spot we are now with music released on music platforms and playing live shows, I guess the only word I can come up with is honored. I feel so privileged to be a part of such a talented songwriter and producer’s band. To say I play music with Grady James just makes me feel like I’ve always wanted to feel playing music. Grady is such a talented musician, songwriter and producer. It’s hard not to feel like I’m playing with one of the best guitarists in the world. It’s just so much fun! Tell you the truth it’s a dream come true. To hear songs on the radio and on Spotify that I get to represent alongside Grady James himself is just so surreal.”

CVW: You’re playing with Grady James at Palm Canyon Roadhouse on June 5th, 2021. What are you looking forward to most and how will you be presenting your music?

Shelly: “I think I’m just looking forward to connecting with people in person. I’ve heard about Grady and his music, it’ll be great to hear him and his band play. As for me, I’ll be solo, just me and my guitar this time out.”

CVW: You were recently featured on Americana Highways Facebook page and performed a 30 minute live set. How did it feel to dust off the cobwebs after such a long layoff?

Shelley: “It felt great to have something to direct my focus on. To put a set list together and play. I really enjoyed it, more than I expected really. The virtual stuff was tough to get into for me…I only did two virtual things over this last 15 months. Josh Heinz’ Concert for Autism benefit (wouldn’t miss that) and the Americana Highways stream. Happy I did both.”

CVW: Many of your more recent recordings are accessible on Reverbnation and 1909 Miles (EP) and Hope Wrapped In Razor Wire (LP) are available on Spotify and Apple Music. Thinking back, how do you feel about your catalog of music and where does Rick Shelley go from here?

Shelley: “I am happy with the songs I’ve been able to share…whether they’ve been on a record or just a scratch demo. I recently pulled down the demos I had up on Reverbnation. Not sure which of those will make it to a record, but it’s time to prep them for a studio effort and figure out what kind of sound they should ultimately have.”

CVW: Rick Shelley and the Desert Dogs is a collaboration between you and a collection of High Desert drifters like Chris Unck (guitar), Damian Lester (stand-up bass), Tyler Saraca (drums), Matt Pynn (pedal steel guitar), and Bobby Furgo (fiddle). What are ya’ll up to? 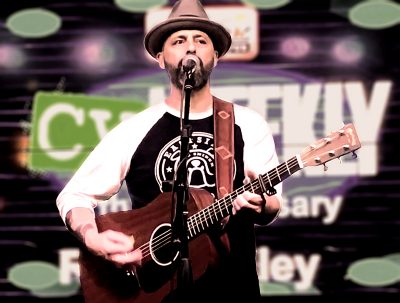 Shelley: “The Desert Dogs collaboration is really a special thing. Each of those players are gifted musicians. Chris Unck really made all that happen. I met all those guys because Chris brought them in while producing my recordings. I’m lucky that they all like the songs and do live shows with me too. I look forward to getting back with them all sometime in the near future.”

CVW: In the past, you’ve talked about how songwriting has changed your life. Can you please elaborate?

Shelley: “Songwriting? Well…some songs are just for fun, they may be rooted in something factual or just totally made-up out of thin air…sometimes though, a song might be the only way to examine a feeling and let it out. It’s a companion. I’ve grown up with it and I’m glad I’ve had it as an outlet to sort things out when I’ve needed to. I’ve changed how I write over the years. I’m still hoping to write my best song.”