By Lisa Morgan
If you have yet to hear the creatively rich, innovative, unique, genre coalition of musical integrity that is Gram Rabbit, then drop what you’re doing and make amends immediately.  This band, fronted by the beautiful Jesika Von Rabbit, and co-founded with the genius of Todd Rutherford, is what happens when two creative forces come crashing together and explode into something bigger and brighter than the very thing that groomed them individually.  It happens rarely, and sometimes it is not recognized by the masses as it should be, but it is pure magic. 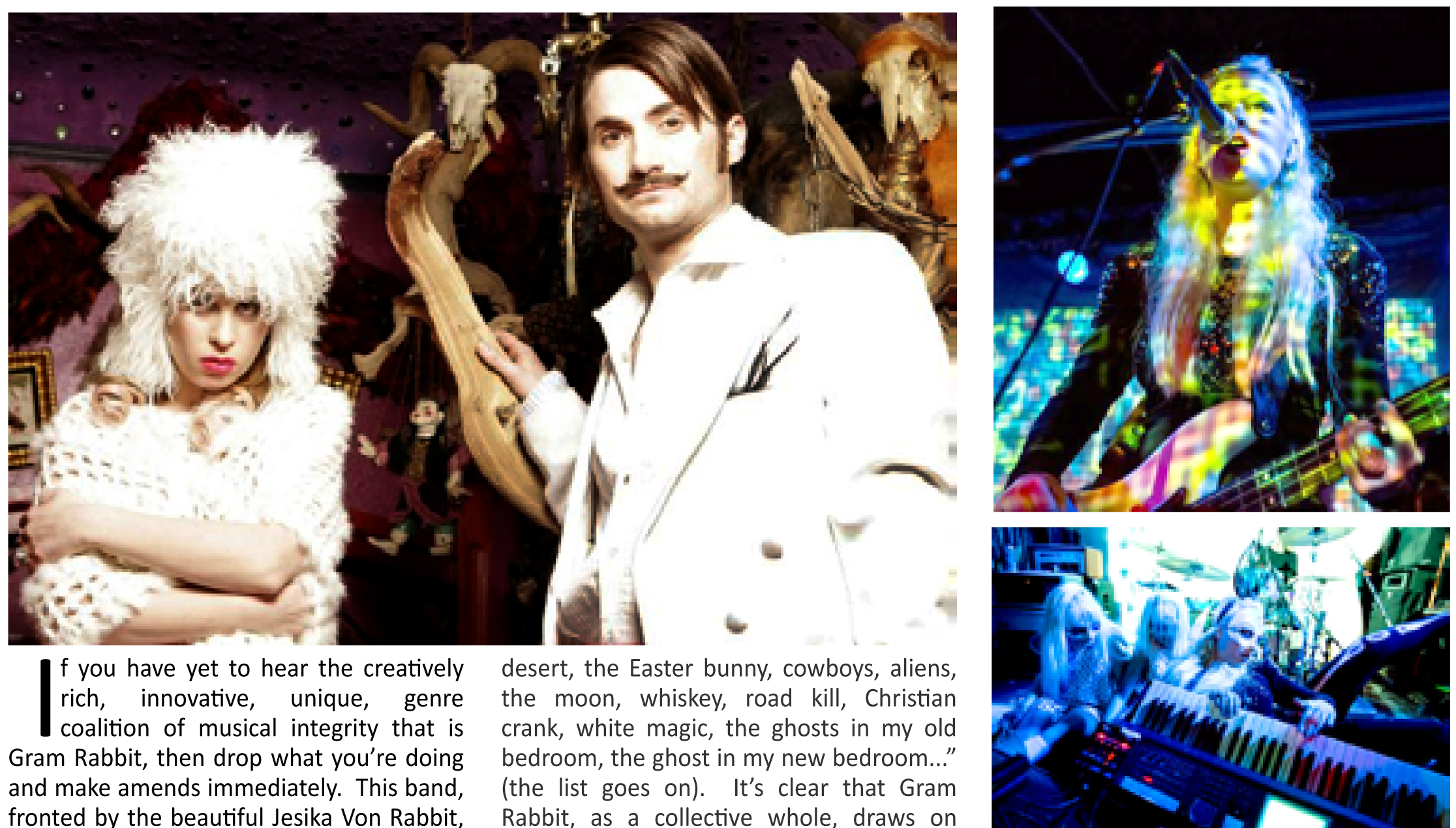 Jesika grew up loving music, influenced by her musical mother and classical piano lessons.  She was always drawn to the sounds that elevated above the norm, and as a child of the 80’s, there were plenty to choose from.  Meanwhile, Gram Rabbit’s Facebook profile touts influences by “miracles and metaphors, Jesus, the devil, the Brotherhood of the Source, the desert, the Easter bunny, cowboys, aliens, the moon, whiskey, road kill, Christian crank, white magic, the ghosts in my old bedroom, the ghost in my new bedroom…” (the list goes on).  It’s clear that Gram Rabbit, as a collective whole, draws on pretty much anything and everything that sits outside the tiny box of the mainstream.  With a theatrical-indie-grunge sound that should have landed them the gig as Quentin Tarantino’s “house band” long ago, they have had huge success in the commercial industry with over 30 different song placements on television and film.  The most recent of these successes being “Desperate Heart” featured on a Fruit of the Loom commercial that began airing during the Olympics, and “Lost in Place” in the movie Crazy, Stupid, Love.

Jesika and Todd met in Joshua Tree after seeking a less metropolitan way of life, while still being able to make music; Jesika from LA and Todd from San Francisco.  And as is common in the sacred, creative macrocosm that is Joshua Tree, these two unique artists found each other and have been a force of musical nature for over a decade.  Their style and name began its early formation while Jesika and Todd prepared for their first gig – an open mic dedicated to the memory of Gram Parsons.  “I was surprised to find I had a country voice, as I sang Emmy Lou Harris and Gram Parsons songs. I never thought of myself singing country, but there I was and I really liked it,” stated Jesika.  They had to come up with a name for themselves at the gig.  Todd came up with “Gram” in honor of the artist they were covering and “Rabbit” due to regular references to Jesika as the animated, Warner Brothers character as well as her love for the song “White Rabbit”.

Despite the folksy origins, “A lot of our stuff isn’t really country,” Jesika explains.  “I know I had a couple of acoustic driven songs on the first album; I don’t even know where they came from: “Dirty Horse” and “Devil’s Playground” ended up being a lot of people’s favorite songs.  But we are also doing electronic stuff, some psychedelic pop and rock.  Last summer we released Welcome to the Country, a psychedelic and cosmic American collection, because I had a group of songs that was dedicated to that sound.  Some people were wondering ‘Are they going country?’  We just don’t like to put limitations on what we do.  We have all kinds of different songs.  We feel like there are no rules to our music, and we will get it out there when we feel like it’s necessary to do so.”  And that, my friends, is how you create music with integrity; you learn the rules so you can break them eloquently.

I asked Jesika, what has been her favorite part of her career thus far.  She answered quickly, “Every time I write a song, I feel like, ‘Oh, I love this!’ Months later it can turn into, ‘Well, maybe it’s not so great’, but initially, there’s this really cool high.”  She also shared that the magic truly happens for Gram Rabbit any time they play in front of a live crowd that feeds on their music and they can feed on the crowd’s energy, causing them to perform at their best.  “Hearing yourself on television is pretty cool too,” Jesika admits. “Living out here in the middle of nowhere, somewhat isolated, when I suddenly hear my voice on a Fruit of the Loom commercial or on a TV show, I’m like ‘Oh my God!’  I run around the house like a little kid and call my mom.  It’s surreal because you’re on national television!  Then the commercial or the show ends and you just kind of look around the house and say, ‘Well, I guess I better do the dishes now,’” she laughs.

“The toughest part of the business,” I ask?  She takes on a deeper more serious tone:  “Continuing to believe in your product, feeling like you have the right team around you, and making the most of the opportunities.  It’s really exciting making records, but if you don’t feel like anyone’s hearing them it can be very discouraging.  These last couple of records, we didn’t have anyone helping us build press and momentum.  You put all your heart and soul into something, and then end up feeling like it’s not getting the exposure it needs.  You have to tell yourself not to give up and say, ‘Well, let’s make another record.’  Believing and not throwing in the towel can be hard.”  It’s in those times that Jesika leans on the words Brant Bjork of Kyuss told her.  “He looked me straight in the eye and said, ‘Jesika, we’re lifers!’ It’s true!  I keep reminding myself what he told me all the time.  I love making music.  This is my life. If I wasn’t doing music, I’d be miserable.  For me, there’s no other choice.  I will be doing this until I can’t get up on stage anymore.  Sometimes it’ll strike out and other times it’ll be great.  I just have to keep digging in and keep doing it.”

Gram Rabbit will be showcased as the closing act at the AMFM Festival, Friday, June 14th in Cathedral City.  They will be performing the newest songs from their album, Braised and Confused and are hoping to have the “Grundalinas”, the two blonde dancers featured in their fantastically produced video, “Final Clap Fever”.  Do yourself a favor and see these legitimately original troubadours described by LA City Beat as, “Dry and tough as mule jerky, sexy as a swayed hip; the music weaves elements of electro-dance, Byrd’s-era country rock, inner-space jazz, and gnomic meditations in the manner of Spiritualized and Pink Floyd into a sound that’s unaffectedly homey, profoundly ambitious, and frankly, revolutionary.”

Following their June 30th booking at San Francisco’s huge Gay Pride event, the group will be returning to their musical domicile in Joshua Tree to construct a seventh album that promises to be as unpredictable, and creatively honest as the last six.  One thing you can count on – it will be a collection built for the auditory delight of those of us who recognize creative integrity and talent when we hear it.  Meanwhile, you can investigate their music and show your support by purchasing it at the following sites:
www.gramrabbit.com      www.facebook.com/gramrabbit        www.twitter.com/gramrabbit     gramrabbit.bandcamp.com/