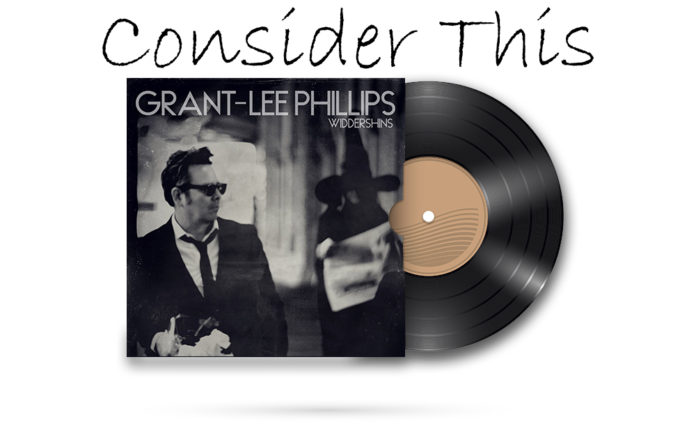 Any devotee of “The Gilmore Girls” certainly remembers the Town Troubadour. A recurring character, he could be seen busking, (for free) throughout the small town of Stars Hollow, his songs acting as a bookend for whatever emotions were being played out by Rory and her mom. He was as integral to the erudite series as Miss Patty or Babette Dell. What most people don’t know is he was portrayed by Grant Lee Phillips, a singer-songwriter and multi-instrumentalist who has made a living as a musician for nearly 30 years.

He moved to Los Angeles in his late teens, working as a roofer by day and attending night school at UCLA in the evenings. Initially, he studied film, but quickly became inspired by the fertile early ‘80s music scene. He was especially enamored by Paisley Underground bands, Dream Syndicate and the Rain Parade.

Landing a weekly residence at the venerable Largo club, the band spent time honing their sound and built a substantial following. They created enough of a buzz that major labels came a’ callin’. Signing with the Slash label, their debut, Fuzzy arrived in 1993. Their videos went into heavy rotation on MTV programs like “120 Minutes” and “Alternative Nation.” Soon, they were opening for heavy-hitters like R.E.M., Pearl Jam and Smashing Pumpkins.

They recorded two more critically acclaimed and modestly successful albums, Mighty Joe Moon in 1994 and Copperopolis in 1998. Feeling the trio had run its course, Grant Lee Buffalo quietly disbanded. At the turn of the 21st Century, Grant Lee Phillips embarked on a solo career.

Between 2000 and 2016 he has recorded eight albums, ranging from his stripped-down debut, Ladies Love Oracle, the textured Traditionalism of Mobilize, the literary songcraft of Virginia Creeper and the dreamy Folk Rock of Strangelet. He honored his ‘80s antecedents with Nineteeneighties, a carefully curated collection of covers. 2009 saw the release of Little Moon, a pithy celebration of fatherhood. Three years later, Walking The Green Corn explored his Creek, Blackfoot and Cherokee Heritage, and his 2016 album The Narrows reflected his recent move from L.A. to Nashville. Now, following a brief two year turnaround he is back with his ninth effort, Widdershins.

The opening three tracks set the tone for the entire record. “Walk In Circles” rushes headlong, blending urgent acoustic guitars, phased electric riffs and thrumming bass lines Tethered to a galloping gate. Grant’s supple vocals are equal parts honey and wood smoke as he caresses lyrics that resist the herd mentality that grips a large segment of the population; “At the risk of inflaming the religious, most certainly there are the loving kind/But the zealots make the rest of us suspicious, and who wants to walk on eggshells all the time?”

Bottleneck guitar, spatial strings and baroque piano are wed to a kick-drum beat on “Unruly Mobs.” The lyrics offer a trenchant allegory that matches Marie Antoinette’s despotic regime to America’s current Cake-Eater-In-Chief. Scabrous guitars howl and fuzz, as the tea and crumpets hit the fan and peasants swarm nobility; “Unruly mobs, yesterday they loved us so, now they plot away like enemies crawling underneath the garden wall/Little good to trim the hedges someone tell me what are clippers for, Louis won’t you fetch my purse before we go?”

Meanwhile, the warm arrangement on “King Of Catastrophes” wraps around the melody like a frayed jean jacket. Sugar rush acoustic guitars envelope this self-deprecating tale. Adopting the guise of lone town-crier, he slyly references Cassandra’s fate in Greek mythology. It’s clear that today’s fractious climate mirrors the fall of Troy, and he offers a wry piece of advice; “The secret of survival in a world like this is use your head before your fist, but everyone wants to think the world is his but it’s not.”

On previous albums, Grant has snuck in some sly social commentary, but this album feels wholly influenced by the 2016 election and its staggering consequences. “Scared Stiff” is a Punky rant powered by hurtling guitars and a whip-crack rhythm. The staccato wall of guitars echoes the post-apocalyptic crunch of the Clash classic “London Calling,” as urgent lyrics reflect a collective sense of terror not experienced since the Cold War.

The breezy tone of “Totally You Gunslinger” belies the deadly serious commentary on gun control. Shang-a-lang guitars and high lonesome pedal steel give the track a Wild West flavor. Rumbling bass lines and a slap-back beat add ballast. The lyrics parody the inefficacy of Conceal And Carry gun laws; “Totally You gunslinger, don’t wear it to the gym/Or fire off in anger, high noon on Lankershim.

“History Has Their Number” attempts to take the long view. Acoustic and electric guitar tangle over a loping, mid-tempo rhythm. Grant urges disaffected voters to reign in the outrage and vitriol, cosmic retribution will be meted out; “And those who wish to judge you, those who would begrudge you all the freedoms they themselves enjoy/Soon will crumble under, history has their number, it means more to create than to destroy.”

The best tracks here are “Miss Betsy” and “Great Acceleration.” The former is a warm shuffle accented by rambling acoustic riffs, stacked backing vocals and a locomotive beat; a sharp indictment of multi-millionaire and (anti-public education) Secretary Of Education, Betsy DeVos. The narrative features a student edged out by her less inclusive policies. Recognizing school is now a dead end, he opts for child labor; “Miss Betsy, I can work in your factory, stitch the leather shoes you wear/ I don’t have your kind of money, pull your kind of strings, but the cabinet is bare.”

The latter is anthemic and urgent in all the right ways. Ringing power chords ride roughshod over a slippery, syncopated beat. A measured excoriation of the Oval office autocrat, it correctly asserts the nation has been duped as covert machinations are revealed.  As the title promises, the song’s velocity increases, spurred on squally guitars, as lyrics insist we have the power to make a change.

Other interesting tracks include “The Wilderness. Here, corrosive  guitars splinter and stutter atop a triple time tattoo. “Another, Another, Then Boom” is anchored by a hopscotch rhythm, icy synths and warm piano notes. The action slows on “Something’s Gotta Give” an almost, not-quite ballad focused on a Trump supporter experiencing buyer’s remorse.

The record sort of closes with the rebel-rebel blast of “Liberation.” But as that song concludes a hidden, untitled, acoustic song pops up offering the droll assertion that the West Wing Oompa-Loompa is in the pocket of Vladimir Putin. A wise-ass finish to a great album.

Grant Lee Phillips played all the guitars and keys here, in addition to handling production chores. Lex Price played Bass and Jerry Roe provided percussion and pounded the drum kit. It was recorded in Oregon and mixed by in-demand producer Tucker Martine.

The word “Widdershins” is a German term meaning turn counter-clockwise, or (ideally), left. Considering the current shit-storm playing out in our nation’s capital, turning left seems like some sage musical advice.