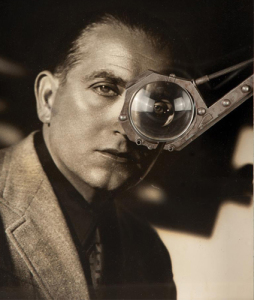 Born in Vienna in 1890, Fritz Lang was encouraged to be an architect or engineer by his father, who owned a successful construction company. After a brief stint in a technical school, Fritz ran off to Munich and Paris to study art and be a painter. He traveled throughout Europe, Asia and North Africa and at the start of World War I returned to Vienna to enlist in the army. Severely injured in the war, he wrote several screenplays while recuperating. Still shell-shocked, he returned to Vienna where he acted briefly in the theater and then got a job as a writer in a Berlin production company.

Around 1918, Berlin film mogul Joe May assigned Lang and actress Thea von Harbou to adapt the latter’s novella “The Indian Tomb” into a screenplay. Lang began a long personal and professional relationship with Thea, whom he eventually married. 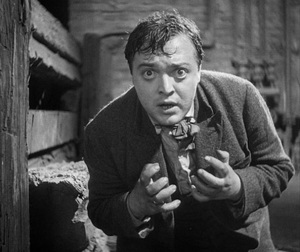 Thea was the source for Lang’s most celebrated films, including METROPOLIS (1927) and M (1931). The latter, about a child killer, made Peter Lorre an international star.

Lang wanted to direct “Indian Tomb” himself but was considered too inexperienced and May took the reigns and assigned 300 workmen to build sets on his 50 acre Maytown Studio. The resulting three and a half hour epic starring Conradt Veidt is still considered a landmark in German cinema. 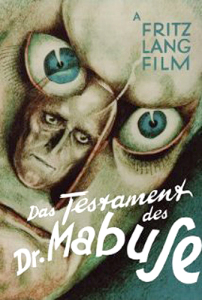 When the new Nazi regime banned the exhibition of Lang’s TESTAMENT OF DR. MABUSE, he left Germany and came to America after a brief stay in Paris.

Initially under contract to MGM, Lang directed numerous American films, including westerns and intense film noirs, over the next 20 years. By the 1950s, the film biz was in economic decline and the detail oriented, artistically opinionated Lang had acquired a “difficult” reputation. 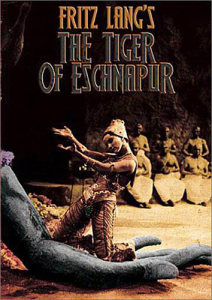 In the late 50’s, the monocle Lang, his eyesight failing, returned to Germany and made THE INDIAN TOMB and THE TIGER OF ESCHANPUR (1959), which were the first films, he wanted to direct (and which he co-authored almost 40 years earlier!).

Previously available in America only as a heavily edited 90 minute condensation on video titled “Journey to the Lost City,” these newly restored, full frame (as photographed), digital transfers of this two-part story is much more than a gloriously colorful comic book adventure that’s reminiscent of serialized cliffhangers. It would be unfair to detail the plot, but the story centers on western architect Harald Berger called to India by the Maharajah of Eschanupur to repair and remodel the royal palace. Berger falls in love with temple dancer Santha, although she is promised to the Maharajah. Already troubled with a scheming brother and a potential revolt of his subjects, the Maharajah sees their love as a further betrayal. Numerous complications ensue for the embattled lovers. The only American actor is Debra Paget in the eye-popping role of temple dancer Santha.

What make these two epics so fascinating are the stark visionary cinema style and the multitude of themes — especially human loneliness — that were so dominant in his art and life. But even more than that, here’s a director who chose to go back 40 years and make his first screenplay his next to last film.

The pace is admittedly and intentionally measured and the sets are obvious, and multilayered. The lighting is much more in the old German tradition of illuminating the set and not just the actors. Complex color harmonies abound within and from scene-to-scene. And the entire enterprise has an operatic feel that adds to the sense of mythic fable that underscores everything.

Lang’s deep personal interest in architecture is beautifully visualized in the elaborate and stunning sets that allow for innovative camera placement to maximize the sense of grandeur.

The architect/engineer hero (Lang’s early but abandoned education in similar fields) eventually explores the decaying, lowest, ancient underground levels of the palace where the “living dead” are kept in darkness. In the same manner, the director seems intent on underscoring the subtext rather than the surface plot. 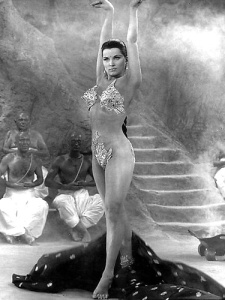 This is the philosophical epitaph of a dark visionary and mature, world-class filmmaker. As dazzling as it is to look at, this exotic adventure with its kitschy eroticism seems to be saying something much more interesting that the Indiana Jones-like story on its surface. Lang’s fatalism permeates every frame of this tale. All characters are defeated in their plans for revenge, escape or power and the gods remain indifferent. Lang seems to be focused on intentionally preaching a provocative message that demands a response: Is there wisdom in resignation? Can we control our destiny?

Filmed in German on location in the province of Rajastan, India, the location certainly nuances the film. A fine English dub is available on an alternate audio track. 1,000 EYES OF DR. MABUSE (1960) was Lang’s last film. His career had come full circle. When he died in Beverly Hills in 1976, he was blind.

This is part of an ongoing series of great filmmakers that will appear at random times when there are no significant new films to review. robinesimmons@aol.com