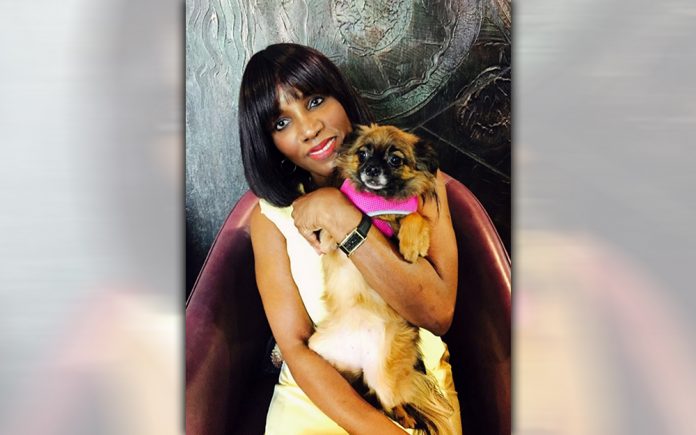 I spotted an adorable Pomeranian mix pup at the San Bernardino County Shelter at Devore during a shelter run in 2013.  It was surprising such a cute dog was not scheduled for an upcoming off site adoption event.  It was even more surprising no one had yet adopted her.  We noticed the dog’s head was shaking, a sign of possible underlying medical problems.  Many people don’t want to adopt a dog with health issues that can bring veterinary bills.  Loving All Animals had recently rescued another dog that was shaking her head, and it turned out to be from an imbedded foxtail in her ear.  We knew that a simple surgical procedure can usually remove foxtails.

We named the spunky 5-pound dog Deliliah on the joyful freedom ride to the Coachella Valley.  A trip to the vet revealed Deliliah did indeed have 5 foxtails deep inside one ear which could cause serious medical problems if not removed.  Foxtails grow unchecked in many of the San Bernardino county fields.  The number and depth of the foxtails suggested that this stray dog roamed the streets and fields for some time.  How did Deliliah survive outdoors where such a tiny dog would be easy prey for predators including large dogs, coyotes, and birds of prey?

It soon became apparent that Deliliah was an amazing little dog with a giant Alpha attitude that rivaled none.  She quickly established her place as “leader of the pack” in the hierarchy when in the company of other dogs.  Her Alpha attitude and “tough girl” body language would have served to protect her in a community full of stray dogs and other dangers.  Maybe her time in the streets helped Deliliah become an Alpha dog when toughness became a requirement for survival.

Deliliah “rounded up” my Mom’s 40-pound Cattle dog during our visits there.  Deliliah was never aggressive, but much larger dog Jessie would run under a bed when she saw Deliliah arrive.  At Loving All Animals’ adoption events Deliliah warmed up to the humans, but had a defiant stance toward their other dogs.  Preferring the company of people, Deliliahh is a precious gem who would melt lovingly into your arms.

Meanwhile, local resident Milissa Meyer was still grieving after the passing of her dog Amy.  An ardent dog lover, Milissa attended a Loving All Animals “Yappy Hour” at the Draft Horse Ranch in Morongo Valley.  Adoptable dogs being showcased were a focal point of the festivities.  A volunteer handed Deliliah to Milissa even as Milissa protested she was not yet in the market for another dog.  Milissa recalls, “When I held Deliliah, she wrapped her arms around my neck and looked at me as if to say ‘please take me home’.  Now when I wake up in the morning and look into her eyes, all my disappointments go away and I’m filled with joy.  Deliliah and I were meant to be together.”

More good things were in store for this perfectly matched pair.  Milissa went on a casting call for Altura Credit Union, naming Loving All Animals as her favorite charity if she and Deliliah were selected.  This gorgeous duo was featured in Altura’s televised commercials across the country promoting Loving All Animals and Altura’s business services.  Deliliah and Milissa beamed down from billboards throughout Riverside County, and Altura presented Loving All Animals a check for $5,000 to help them rescue more homeless dogs like Deliliah.

In August, 2020, Milissa Meyer sent me this email:  “I want to thank you so much for convincing me to adopt my sweet little Deliliah.  She is the best thing, other than my children, that ever happened to me.  During this Corona Virus pandemic, we’ve got to know each other even better.  We eat together, we walk together, and we sleep together.  I wake up every morning very happy, and never depressed.  I’m not lonely when I wake up to Deliliah looking at me as if she’s saying ‘Mom, thank you for saving my life.’ And I say back to her, ‘thank you for saving my life.’”

Contact Loving All Animals at (760) 834-7000, www.lovingallanimals.org.  Experience the joy of adopting a rescue dog or cat at one of the shelters or private rescue organizations listed below.