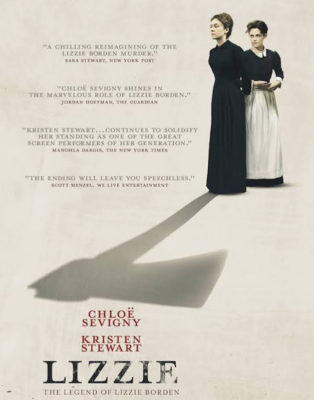 I can’t recall the number of films that have been inspired by the true crime that became a nursery rhyme.  You must know it and maybe even skipped rope while chanting it:

And gave her mother forty whacks;

When she saw what she had done,

She gave her father forty-one.

On August 4, 1892, Andrew and Abby Borden, two well-to-do elderly residents of Fall River Massachusetts who lived alone with their unmarried daughters, were found bludgeoned to death, Andrew’s face had been nearly split in two and Abby’s head was smashed to pieces. 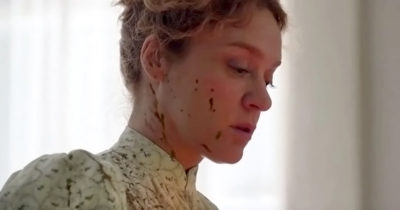 Since their daughter Lizzie and a housekeeper were the only persons present, suspicion soon fell upon Lizzie. Due to the sensational nature of the bloody crime, the trial attracted national attention.

Even though fingerprinting was becoming a common investigative procedure, the police refused to test the murder weapon – a hatchet – that was found in the basement. The prosecution tried to prove that Lizzie burned a similar dress the day of the crime and had purchased a small hand axe the day before. But since Lizzie was an innocent-looking Christian woman, the jury took barely 90 minutes to decide that she could never commit such a heinous murder.

Although Lizzie was now an orphaned heiress rather than a convicted murderess, the popular press of the day continued to portray her as the perpetrator. 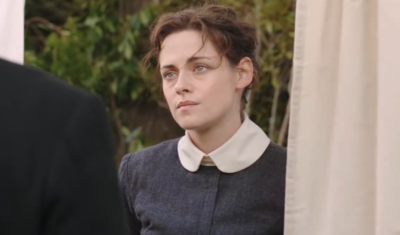 An empathetically fascinating and ferocious Chloë Sevigny stars as Lizzie Borden, who, after a lifetime of loneliness, finds a kindred spirit in housemaid Bridget Sullivan (Kristen Stewart). But was it really their secret intimacy that triggered such an unthinkable act?

Throughout the film, I was reminded of Peter Jackson’s s similar but superior Heavenly Creatures (1994).

Director Craig William Macneill’s admittedly speculative but engrossing movie explores the days leading up to the savage double murder in an exceedingly dark tale of repression, exploitation and abandoned dreams. Stylish and beautifully photographed, the film conveys a specific time and place with convincing authenticity. 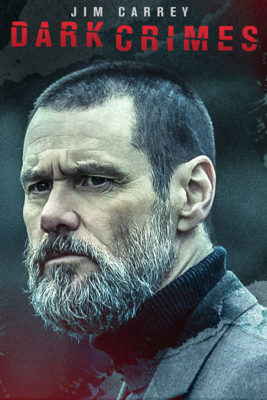 An unexpected Jim Carrey stars in this slick neo-noir crime-thriller based on The New Yorker article, “True Crimes: A Postmodern Murder Mystery” by David Grann.

An understated and solemn Carrey commands the screen in this intermittently spellbinding suspense story from the executive producers of The Revenant and Black Mass.

When Polish police officer Tadek (Carrey) finds similarities between an unsolved murder and a crime outlined in a popular novel by the famous writer Krystof Kozlov, Tadek begins tracking the writer and his girlfriend (Charlotte Gainsbourg ), a mysterious sex-club worker. As Tadek’s obsession and envy of Kozlov grows, he descends into a deadly underworld of sex, lies and corruption and risks it all until he finds the truly shocking and deadly truth.

I liked this literally darkish – grey skies and muted color palette – tale about an uncorrupted detective in post communist Poland obsessed with an unsolved crime while investigating a writer who, beyond his nihilist author personae, is trying save his girlfriend’s life. Worth a look. Lionsgate.