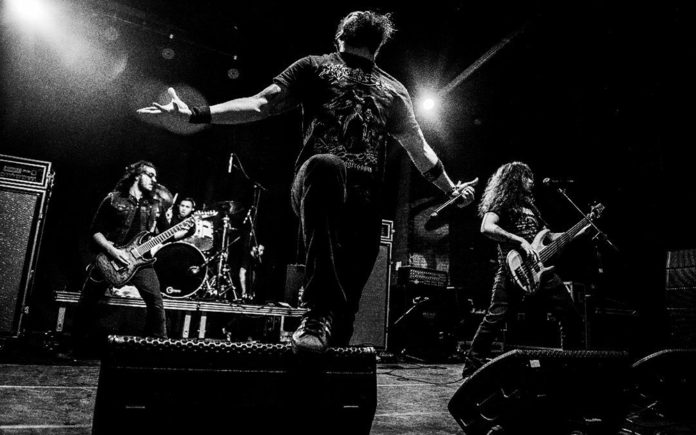 The Austin-based multi-metal band HEADCRUSHER make their way to Gadi’s Bar & Grill on Thursday July 11, 2019 at 8 p.m. to kick-off their ‘Seismic Trails 2019 West Coast Tour’ with the desert’s own metal reps Instigator and rock trio Sleazy Cortez providing support on the stop.

Here’s a short bio/timeline of HEADCRUSHER followed by my interview with Carlos Ramirez (guitar).

2001 – 2006
HEADCRUSHER was formed in 2001 in Pereira, Colombia, South America. Their blend of Thrash, Death and Hardcore Metal sent them to the top of the growing Colombian and South American Metal scene. They have performed at many successful shows in their homeland including the prestigious Rock Al Parque festival and FFF festival in Ambato, Ecuador.

2007 – 2010
HEADCRUSHER moved to New York in 2007. The band then relocated to Austin, Texas in the summer of 2008 and recorded their self-titled EP in 2009. The tracks were mastered by Juan Urteaga (Exodus, Testament, Machine Head) at Trident Studios in Northern California, with artwork designed by Alex Eckman-Lawn (Architects, Syopus, Hacride). With the release of the self-titled EP in 2010 and a steady stream of gigs throughout Texas, they gained a bigger following.
2011 – 2012
In March of 2011, they won the Road to Full Metal Texas contest presented by RoadRunner Records and played at the SXSW showcase, sharing the stage with such bands as The Red Chord, Upon A Burning Body, Kvelertak and Trap Them. In January of 2012 they released Let The Blood Run, their first full-length album released on American soil. It was recorded in Austin at Lucid Audio, and was mixed and mastered by Tue Madsen (The Haunted, Behemoth, Dark Tranquility, Hatesphere) with artwork by Jon Zig. They toured the east coast of the US and were, once again, invited to play Rock al Parque. This homecoming provided them the opportunity to share their music and hard work after 7 years gone. The reception was overwhelming.
Their single, Prisoner Machine, streamed daily on Liquid Metal Sirius Satellite Radio.
They were then invited to play Barge to Hell, the world’s first Extreme Metal Cruise. The festival line-up included At the Gates, Behemoth, Brujeria, Exodus, Sepultura and Sodom.
2013 – Present
HEADCRUSHER completed the EP Black Burning Skies (2013) recorded by Gustavo Adolfo Valderrama at Electric Flow Sound Solutions. It once again featured the mixing and mastering of award-winning producer Tue Madsen and artwork by Jon Zig. They released the official video of their single Swimming In A Sea of Death, a collaboration between Swedish guitar player and filmmaker Anders Björler and the band. The band was invited to perform at Phillip Anselmo’s HouseCore Horror Music and Film Festival. During this time the band signed a vinyl production and distribution deal with Spora Recordz featuring their last two productions Let The Blood Run and Black Burning Skies. In 2014 the band released their double-vinyl and a video for the song Common Nonsense, directed by Michael Panduro.

Coachella Valley Weekly spoke with guitarist Carlos Ramirez from his new home in Los Angeles. The rest of the band are in their respective locations, Alejandro Ospina (drums) and Gustavo Calderon (bass) remain in Austin and Gustavo ‘Kike’ Valderrama (vocals) is in Singapore. They will meet up with Ramirez two days prior to the Yucca Valley show.

CVW: How did HEADCRUSHER end up in the states? 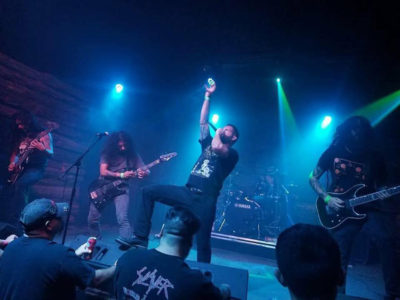 Ramirez: “I’m in Los Angeles now. The band moved in 2007 to the states. The rest of the guys are in Austin, Texas. Initially we moved to New York from Colombia. We had a lot of friends in common in New York. Texas was our ultimate destination because they have a lot of live music festivals. We also had a friend there, a bass player. Our singer’s wife was from Austin as well. We were trying to make big changes and that was the best place at the time. We lived there for over ten years. We accomplished a lot there. There’s a strong metal presence; we loved South by Southwest and Austin City Limits Music Festival. It’s the live music capital of the world. We can perform on any night of the week. You will find over 200 different live venues on one street.”

CVW: Tell us about how the Seismic Trails West Coast Tour came to be?

Ramirez: “The idea for the tour started last year. I visited my friend Gustavo in Vancouver. He’s a sound engineer who helps us with production. We talked about it being time for a west coast tour. So, we linked up some shows in L.A. and Canada. The Yucca Valley show is a special date for me. A year ago, I went to there and it’s a great place to get out of the city. To think and relax. I decided to start the tour there. We’ll get there two days before to spend time writing and rehearsing. I also really want to show some spots to the guys. I feel the place is magical. We want to travel and see places. This tour has a lot of meaning.”

CVW: What do we need to know about your fellow band members?

Ramirez: “Alejandro has been my friend for more than 20 years. He’s an original member of the band. Two years after I joined, we became best friends. Alejandro is a very, um, how can I say it? That motherfucker is really funny! He’s a great drummer. His sense of humor is 100% real. He keeps the fire burning all the time. His humor is very ‘spicy’ I would say.  Gustavo, the bass player, he’s responsible for having this band currently active. He’s super-able and honest. A real sweet person. We call him ‘The Mayor of Metal’ in Austin. Everyone knows Gustavo. He’s been in Metal bands in Austin especially one called Shrapnel, which back in the day was a big band. Kike is the teacher of the band. He’s the guy who makes the wise decisions. He’s a super-cool friend. We all love each other as brothers.”

CVW: How would you describe your back catalog of music?

Ramirez: “HEADCRUSHER has gone through a lot of moods and changes so it’s really hard to define our catalog. Each album has sold well except for one that we rushed in Colombia. The first EP recorded; I was not on that album. It was pretty Death Metal with a lot of breakdowns. After that we became more progressive. We started to write music that talked about being away from home and in being in a new country. We gained a lot of knowledge from being in Austin. There are four albums that I actually call HEADCRUSHER music. We’re heavy. We’re Death/Thrash. We are a combination of different energies, tastes and experiences. I feel lucky to have a band that can bring different gifts to the table and create this sub-genre of music.”

CVW: What are the plans for new music and touring?

Ramirez: “We are always active. We like performing live to make plans for the future. Me having moved to L.A., two guys in Austin and our singer in Singapore makes it challenging. We need this time to create a new path for HEADCRUSHER. We are in the writing process. We have nice offers for festivals in Mexico. We also have plans to play in Asia. The most important thing is writing right now. We need new music and it’s coming along really well.”