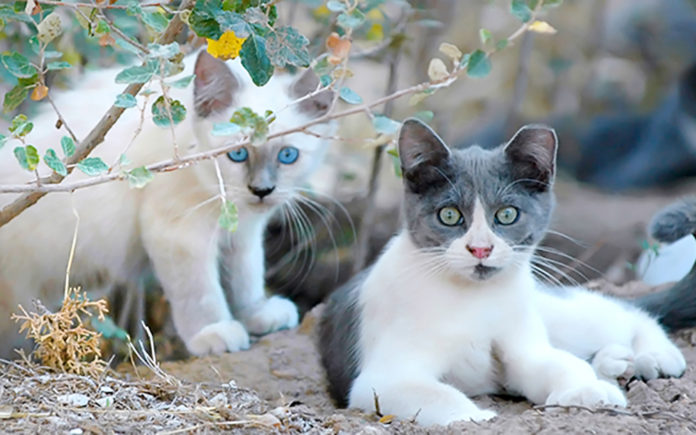 You see the little creatures scurry through restaurant parking lots, foraging for food in trash cans and handouts from patrons.  Many Coachella Valley communities report colonies of stray cats, including litters of newborn kittens, living outdoors in the elements and roaming their neighborhoods.  These cats without human homes create their own home in the wild, banding together for protection and companionship in colonies.  However, without veterinary care, they may suffer from disease.  Unsterilized, uncounted thousands of Coachella Valley stray cats breed at a rapid rate, creating unmanageable populations.

Some of these cats are STRAY cats, lost or abandoned animals that once had a human family.  They are socialized and friendly, and can easily be rehomed.  In contrast, a FERAL cat is an outdoor free-roaming animal never socialized to people.  Some feral animals were born in the wild, while others were once domesticated, then abandoned and reverted to “wild” behavior.  COMMUNITY cats, a term now used to describe both groups of cats, implies that these creatures deserve to have a place outdoors in our community.  They need not be rounded up and exterminated.

Our Riverside County Department of Animal Services, like most public open-admission shelters across America, struggles with the issue of picking up stray unsocialized cats by the thousands and not being able to adopt them into new homes.  In 2016, at our local County shelter, The Coachella Valley Animal Campus, the live release rate for cats (many of them feral animals) was only 35 percent.  Most cats are not tagged or microchipped, and the number of cats returned to their families from the shelter was less than 3 percent.  No one wants to see thousands of animals euthanized in public shelters (at large taxpayer expense), but massive assistance was needed to turn these statistics around.

In January, 2017, help arrived to the Coachella Valley when a new Community Cat Program was launched with the goal of helping 3,500 animals per year over a three year span.   Trap/Neuter/Return (TNR) programs across our nation were already steadily solving the problem of too many unwanted stray felines.  TNR programs spay or neuter, vaccinate, and then return the cats to their community location.  The number of cats killed in shelters is then reduced and the number of cats is stabilized.  The nuisance complaints that lead to cats being brought to shelters are also reduced.

Based at the Coachella Valley Animal Campus in Thousand Palms, this new program is funded by Maddie’s fund, and coordinated by Best Friends, Riverside County Department of Animal Services, and Friends of the Palm Springs Animal Shelter.  Shelter-bound free roaming felines can now be sterilized, vaccinated and microchipped at several veterinary clinics throughout the Valley, and then released to live out their lives.  Collaboration among many local animal welfare organizations became the key to the program’s early success.

Destiny Haney, Community Cat Program Supervisor with Best Friends, explains, “As we end the first year of the program, we couldn’t be more excited to see the lifesaving happening at CVAC.  Since February of 2017, we provided almost 3,500 surgeries which meant that some 1,300 fewer cats died in the shelter last year.  The save rate for cats in November 2016 was 37%, as compared to 73% in November 2017.  Since the program is based out of CVAC, we could not have done it without the support of Director of Riverside County Animal Services, Rob Miller, Deputy Director Frank Corvino, and the entire shelter staff.  This effort challenges everything that shelters historically considered standard practice for dealing with cats. Spread the word and work with us!  We need more volunteers to help with trapping, transporting cats, providing administrative support, and fostering for the shelter.”

Mary Ewing, director of Loving All Animals’ Whiskers & Purrs program, adds, “We are thrilled to have Best Friends in the Coachella Valley providing funds and organization to save these cats.  But to become more efficient, we need more veterinarians, more vet techs, and more people to help trap the cats.  The community of cat lovers needs to assist if we are going to solve our community cat crisis.  Please help, and your help can be as simple as calling to borrow 2 traps.”

Would you like to help these beautiful animals?  The main hotline number for the Community Cat Program is (760) 507-1228.  Send emails to coachellacats@bestfriends.org.  To learn more about community cats and TNR go to bestfriends.org/straycats.  Remember the slogan at Best Friends, “TOGETHER WE CAN SAVE THEM ALL”.