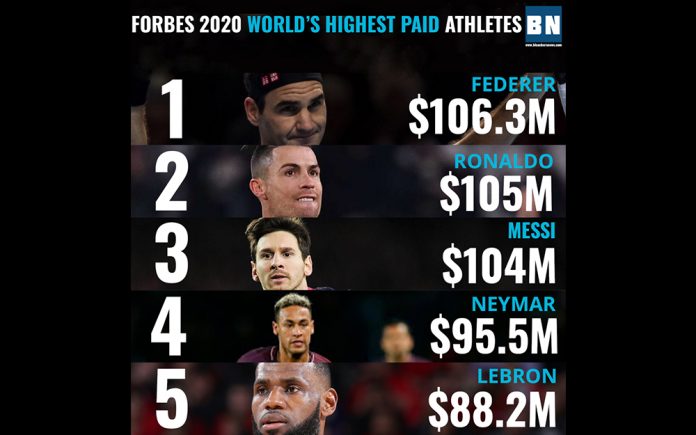 Forbes Annual Ranking of the highest paid athletes showed that international sports like tennis and soccer than national pastimes like football and baseball.

Swiss tennis star, Roger Federer, 39, tops this year’s list with earnings of $106 million with $6 million from his performance on the court.  The remaining $100 million came from endorsement deals like his clothing line, Uniqlo.

Cristiano Ronaldo, 36, is probably the most famous active athlete in the world.  Of his $105 million in earnings, $60 million come from his salary on the soccer field with $45 million from endorsements with companies like Altice, Nike and Unilever.

Earning nearly as much as Ronaldo is Lionel Messi, the 33 year-old soccer sensation from Spain.  Neymar, the 29 year-old Brazilian soccer phenomenon is fast on Ronaldo and Messi’s heels at $96 million.

LeBron “King” James in fifth is the first American on the list with total income of $88 million with $28 million coming from the Los Angeles Lakers and the rest from deals with 2K Sports, Coca-Cola, Nike and Walmart.  James also owns nineteen Blaze Pizza franchises.

In sixth is Stephen Curry, 33, of the Golden State Warriors at $74 million   $44 million comes from a mix of business interests including a television and film production company, endorsements with Callaway Golf, Chase Bank and Under Armour or SC30, his family office.  Curry’s former teammate, Kevin Durant, 32, is in 7th at $64 million.

Despite very little time on the links, Tiger Woods remained the top earning golfer at $62 million, landing eighth amongst the most highly compensated athletes.  It only makes sense that a golfer whose name sounds like a golf club would finally make a golf club.  Instead of making Tiger Woods Woods, they started with Tiger Woods Irons which almost sounds like the start of a variation on the Abbott & Costello, “Who’s on First?” comedy routine.

Another athlete whose name seems made up is 32 year-old U.K. boxer, Tyson Fury.  Earning $57 million landed Fury in eleventh place.

A few notches higher In ninth is the highest paid American football player. This quarterback earned $61 million last year and was not named Patrick Mahomes, Tom Brady or Aaron Rodgers.  The top bread winner amongst quarterbacks is none other than Kirk Cousins…you know, the quarterback of the Minnesota Vikings.  The second highest paid football player and tenth is Carson Wentz, formerly of the Philadelphia Eagles $58 million.  Wentz will be fighting it out for a starting job with the Carolina Panthers next season.  In third is another quarterbacking disappointment in Los Angeles Rams cast-off, Jared Goff.  Earning $49 million landed Goff in the fifteenth spot as well as a new starting quarterback of the perennially bad Detroit Lions.  Seems like a match made in mediocrity.

We have to slide down to 21st on the list to find G.O.A.T. and perennial Super Bowl winner, Tom Brady earning a paltry $45 million.  Good thing that TB moved out of Taxachusetts for income tax-free, Tampa Bay.

Some of the top earning athletes in other sports include auto racer, Lewis Hamilton with $54 million and the 13th spot.  Badass Conor MacGregor is sixteenth at $48 million and Cricket star and batsman, Virat Kohli at $26 million and the 66th slot.  While Kohli earns a mere $1 million for his sport, 134 million social media followers means that he has some lucrative sponsors like Audi and Valvoline.

The top woman on the list is Los Angeles resident Naomi Osaka at $37 million and the 29th slot.  Osaka surpassed Serena Williams to become the top earning woman in tennis as well.

Another Los Angeles resident, Clayton Kershaw is the top earning baseball player at $27 million and 47th on the list.

The highest paid hockey player, NHL’s Auston Mathews of the Toronto Mapleleafs, earned $16 million placing him well outside of the top 100 paid athletes.