For many of us, traditional Christmas movies are a ritual. Feeling good about the unasked-for-gift of life can be especially hard during this festive season with news of irrational evil and bloodletting here and abroad. However, great holiday movies can be a legitimate antidote to this malaise as they remind us of the hope for peace and love that is often elusive. IT’S A WONDERFUL LIFE, CHRISTMAS VACATION, THE CHRISTMAS STORY hardly need to be touted since they are part of our shared American culture. 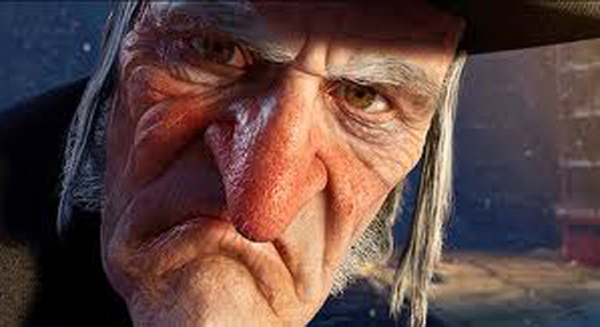 Charles Dickens’ beloved “Christmas Carol” has been filmed at least five times. I really like the motion capture of Disney’s CHRISTMAS CAROL directed by Robert Zemeckis showcases an exceptional Jim Carrey as Dicken’s tightwad curmudgeon. Carrey plays at least five roles. Terrific production design infuses every scene. Originally intended for Imax 3D, both the Blu-ray 2D and 3D look great. This film has a devoted following and is a regular seasonal treat with many families.

While staying true to the source material, it’s also a beautiful and frightening motion capture piece of contemporary pop movie art. So is Zemeckis’ über eerie POLAR EXPRESS, in which zombie-eyed kids visit a gigantic Santa who rules an icy kingdom of forced cheer in the North Pole populated by genetically bred, mostly male, red-uniformed midgets 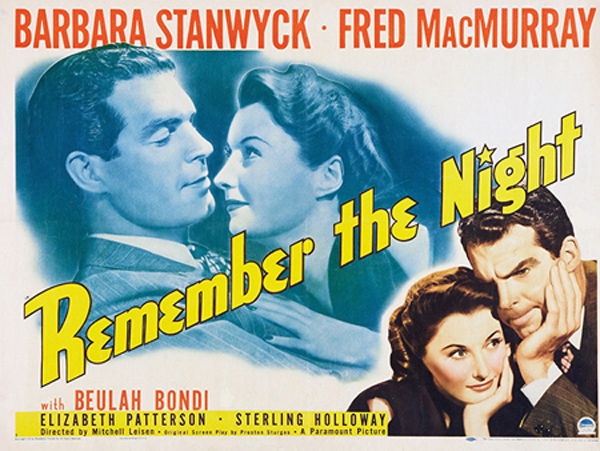 (I use that word advisedly). I love this film for all the wrong reasons. See it again with new eyes.

For a most worthy but much lesser known film that fills the movie void this winter solstice, try the under-appreciated gem REMEMBER THE NIGHT (1940). Prosecutor Fred MacMurray falls in love with shoplifter Barbara Stanwyck over the Christmas holiday. Writer-director Preston Sturgis is at the top of his game. The more I see this little gen, the more I appreciate its wit and sweetness. 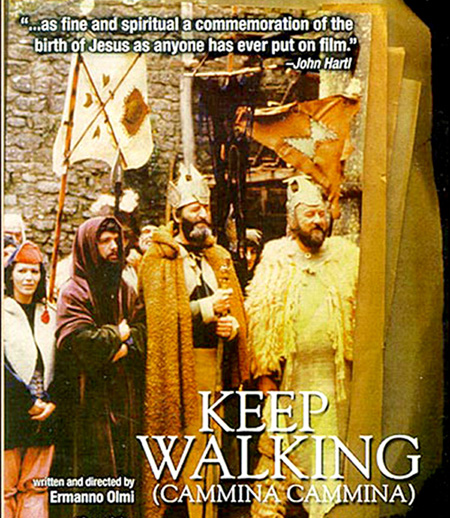 The journey of the Magi to Bethlehem is the subject of the great Italian artist and filmmaker Ermanno Olmi’s 1982 epic tone poem. Shot in Northern Italy in rustic and rural locations and filled with amateurs, this magical film is spiritually rooted in a way that is open to all faiths. And even to those with no faith. I was reminded at times to Chaucer’s “Canterbury Tales” as the Magi interact with a caravan of soldiers, merchants, villagers and assistants following in the direction of a comet. This rich tapestry makes real a journey cloaked in mystery and humanity. 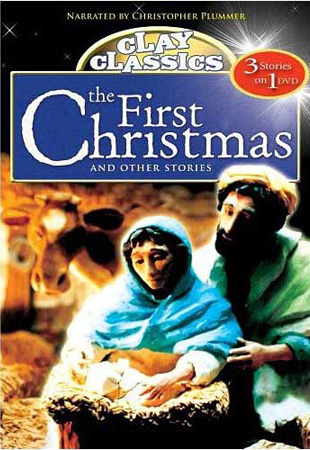 THE FIRST CHRISTMAS AND OTHER STORIES
This collection of three stop-motion Christmas themed stories can be found in discount bins and dollar stores. But don’t mistake that for a shoddy product.

Animator Will Vinton popularized and coined the term “claymation.” The first title in the set is the multi-award winning “The First Christmas.” Christopher Plummer narrates the Biblical story of the birth of Jesus. The range of detail and emotions is portrayed is startling. Charles Dickens’ “The Chimes” is about a man that sees so much sadness around him that he regrets being born when church bells heard in a dream send another message. Derek Jacobi narrates. “The Christmas Gift”, based on the Peter, Paul & Mary song “Christmas Dinner” is only 9 minutes long but is heartfelt and rather moving. 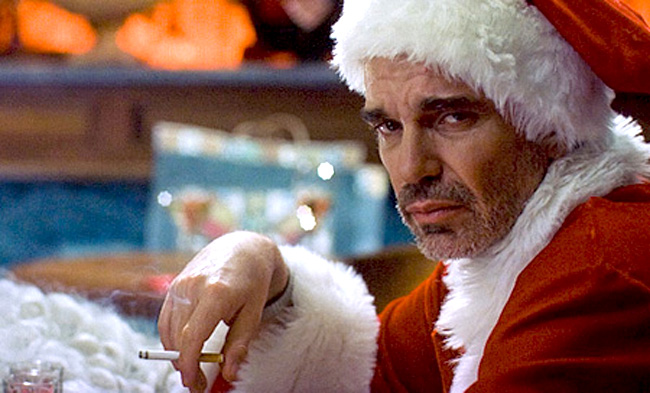 In my opinion, the best Santa movie is BAD SANTA starring Billy Bob Thornton as a profane, angry, cynical, doomed alcoholic thief who finds the meaning of an authentic Christmas spirit in the unconditional love of a fat, bullied boy. The movie is a masterpiece of acerbic honesty but certainly not for all tastes. Three editions of the film exist including BAD(DER) SANTA. 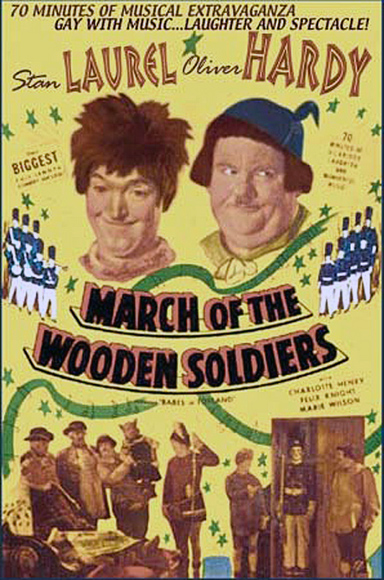 On the far end of the holiday musical movie spectrum is the colorized Laurel and Hardy classic MARCH OF THE WOODEN SOLDIERS. Adapted from Victor Herbert’s operetta “Babes in Toyland,” there’s more of the Holiday Spirit in this 1934 classic than in most of the insipidly lame attempts of movies that exploit kid stories.

Dum (Stan) and Dee (Ollie) are Santa’s toymakers preparing for the big delivery on Christmas Eve. Mother Goose and nursery rhyme characters are all over the place and Stan and Ollie are in constant, bewildered, trouble (“Is that 100 six-foot toy soldiers or 600 one-footers?”). Making an appearance are Silas Barnaby, (remember “the meanest man in town”?) and Bo Peep who’s being forced into marriage by Silas. Will evict Bo’s mom, who is in fact The Old Woman In The Shoe? And there’s Tom Tom the Piper’s Son who swoons as Ms. Peep’s true love. The great finale revels the creepy attack of the Bogeymen.

This classic has been cleaned up and colorized and looks about as perfect as the best of old-style children’s book illustrations. Stan Laurel once said he regretted they couldn’t shoot this in color. The colorizing is certainly no sacrilege. This is one beautiful, Fauvist fever dream of a movie and a weirdly mesmerizing cinematic drug.

For those who dare to read between the lines (or movie frames), this film can be seen as a subversive horror fest that plumbs deeply disturbing psychological and political elements rarely touched on in contemporary films. Space does not allow a deeper analysis. It is amazing to me that someone hasn’t examined this in detail. It’s worthy of a doctoral thesis. I have often wondered how much of it may have been intentional — perhaps from the brilliantly demented mind of Stan Laurel. Only on the surface can this be considered a children’s movie. 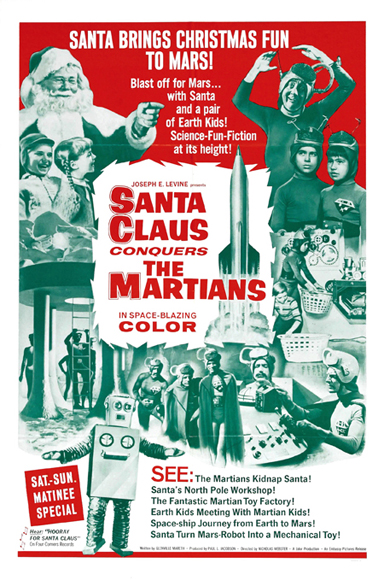 And if you’re still seeking a fringe Santa story, there’s always SANTA CLAUSE CONQUERS THE MARTIANS. A recent digital restoration doesn’t really make this exceeding odd 1964 movie better, even though it’s sharper. See the movie debut of beloved (?) B singer and actress Pia Zadora (Where is she today? In Palm Springs reading this?). The plot has a Martian invasion that kidnaps Santa since there’s no one on Mars that gives children presents – or something like that. Two earth kids attempt to rescue Santa and return him to earth. And it’s all captured in “Space Blazing Color!”