Performs at the Palm Springs Riviera Resort Friday and Saturday. 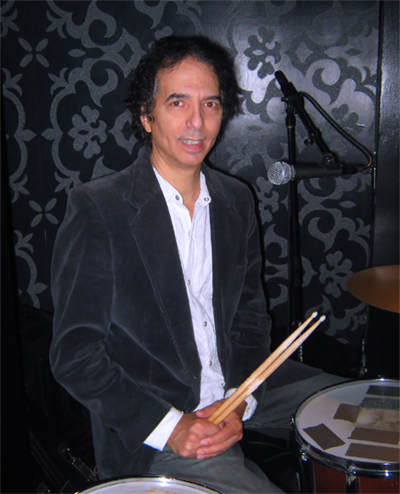 Buddy Greco, Jr. is back in town and has started a new group called Hotwyre. They have been performing at the Palm Springs Riviera Resort in the Side Bar every Friday and Saturday from 10 p.m. until 1 am and will be there indefinitely.

All the band members sing lead vocals and include Doug Anderson on guitar, Gene Beavers on bass with Greco on drums. They are performing your favorite Rock and Dance music and receiving rave reviews. While stopping by to see the band, one of the guests commented, “I am so glad I stopped in tonight. This music is great!”

Back in the day before the Riviera was remodeled, Greco’s father, the Legendary Buddy Greco performed there when Sinatra was in town during the 1970s and 1980s. In 2004, Greco, Sr. and his wife, Lezlie Anders, starred in The Fabulous Palm Springs Follies. As a result, they opened their own club; Buddy Greco’s Supper Club. It was a great hot spot not only for themselves, but for many other headliners like Roberta Linn, comedian Pete Barbutti, Barbara McNair, Jack Jones, Joe Pesci and Sally Kellerman, to name a few.

Born and raised in Long Island New York, Greco, Jr. comes from a musical family. His mother, Sally, sang opera and his two sisters, Cindy and Joann are both singers and artists. Greco, Jr. started playing drums when he was five years old and started playing in bands when he was twelve years old. “Even though I was a rock drummer, I always wanted to play drums for my Dad. I know he doubted I could play his music because his charts were very intricate, but in my heart, I knew I could do it.”

In 2007, Greco, Jr. came to the Coachella Valley to celebrate his birthday and see the new club. During his stay, he teamed up with bassist Danny Flahive, and learned his father’s extensive repertoire. After about six weeks of secret rehearsals, they decided to perform for Greco, Sr. at the club. Much to his surprise, Greco, Sr. was thrilled to hear his son play his material with ease. He joined the band and in addition to playing in the club, Greco, Jr. toured Europe with his father in 2008 and 2009. He was his drummer until they closed the club and moved to London in 2011. Greco, Jr. still performs with Flahive as the Buddy Greco, Jr. Trio.

He remained in the desert and went back to his first love, playing in various rock bands, performing at The Rock Yard, Augustine Casino, The Agua Caliente Casino and numerous private parties. He married Melody on April 5, 2011 and they moved to Las Vegas for a short time. Later that year, he moved to Portland, Oregon to do extensive recording studio session work, followed by a quick stint in Washington, D.C. for the same reason.

Having missed being in the Coachella Valley, the couple returned in August of 2014. Since then, Greco, Jr. has been helping his father, who moved back to Las Vegas with Anders in 2014, write his book. In February of 2015, Greco, Jr. formed his band, Hotwyre. He performed in the Valley and caught the attention of Tom Wright, who is the General Manager and Curator of the Palm Springs Riviera and hired them to perform. “I want people to know that The Side Bar is the place to go in the Valley for the best rock music. I feel we have the best band.”

Stop by the Side Bar and enjoy your favorite music with Hotwyre featuring Buddy Greco, Jr. and enjoy a variety of drink specials, good food and the wonderful ambiance of the Historic Palm Springs Riviera.