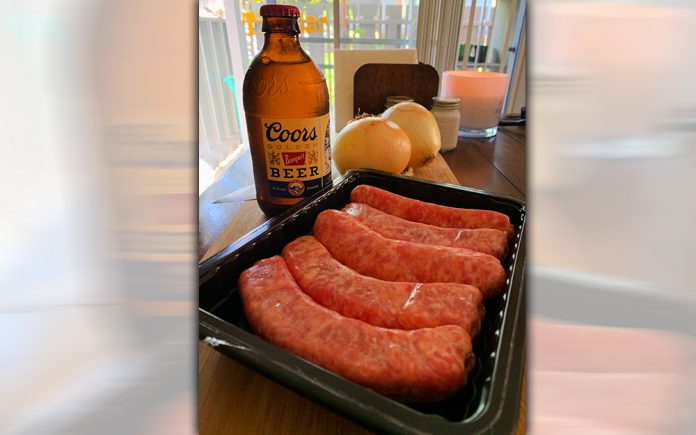 Just for entertainment, go ahead and search for “worst chef on YouTube”. If you want to exit this page to search it now, I’ll wait. I’m just folding laundry tonight anyway; I’ll totally be here when you get back.

Did you find the videos? Was it the buxom Englishwoman with the Iron Maiden shirt, who manages to both burn and undercook every single depressing thing she attempts, or was it the chubby American guy with the goatee and glasses, the one who the comment section calls, “The Master of Mayonnaise, The Sultan of Salmonella, The Fuhrer of Food poisoning?” At least the Englishwoman seems to be trolling when she creates the culinary abominations that populate her videos. The chubby, bespectacled, goateed American really believes that he’s a chef. It’s a soft-headed imbecile like him that probably popularized the method of grilling a sausage before boiling it. Yes folks, cretins, halfwits and dullards from county to coast actually believe that you should grill a hotdog or bratwurst before bathing it in beer. Anytime you question the judgement of our elected officials and wonder just who the hell voted for them, remember that stupid people who can’t cook are on YouTube, trying to show you how to cook.

If texture, flavor, and self-respect are things that matter to you, there’s only one way to cook a ‘dog or a brat. Here’s an easy reminder of the order of operations: grill then simmer, terrible dinner. Simmer then grill, brats are chill.

Look, there’s no magic at play here, this is pure science we’re talking about.

Bratwurst, frankfurters, knockwurst and serdelki are all fresh, emulsified sausage; meaning that they’re made from a mixture of finely ground meat, fat, and water. Whether fried in cast iron or grilled over open flame, direct heat renders the fat, melting it to a liquid while simultaneously denaturing the proteins in the meat and causing the water to push out of the muscle fibers. This causes the inside of the sausage to expand while the direct heat simultaneously causes the elastic casing of the sausage to rapidly contract. These actions cause the sausage casing to come under sudden, intense pressure until it bursts, splitting the sausage open and releasing all of the rendered juices. Your grilled or fried sausage is browned and crispy, with a split down it’s side, all of its juices spilled out. Now look at you, sitting there with a dry-ass sausage on your plate. This is where people think that throwing the split open sausage in boiling beer will replace lost moisture in their lunch.

If you enjoy cooking your steaks well-done before drowning them in A1 steak sauce, I can’t help you. Frankly, I’m surprised you can read. But if you want to cook the most tender and delicious sausages ever, read this shit I’m about to share.

HOW TO GRILL THE BEST BRATS EVER (serves 2) 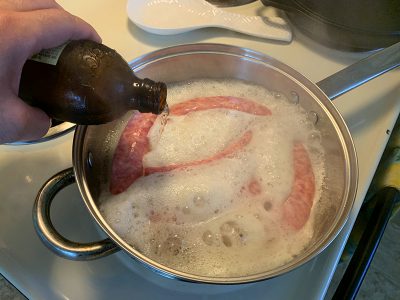 2-4 fresh bratwurst sausages. Most grocery stores will carry a selection of sausages in their meat department; some are made fresh in store, while others are previously frozen. If you’re in the mood for a hotdog instead, this recipe works just the same for those. I prefer deli-style frankfurters over packaged hotdogs.

1 can or bottle pilsner beer. Sure, sure you can get all bespoke if you want, and simmer your sausages in an IPA or Saison or a Belgian Tripel. Craft beer is full of people who think that tradition is boring and unimaginative, and it’s these same people who find so much satisfaction in gimmickry and extraneous steps for the sake of being sOoOo DiFfErEnT. I say, use a quality craft pilsner if you want to chase beer clout, and quit trying to use beer to cover up your lack of personality (also, your beard isn’t a personality, it’s just a coverup for your recessive chin. You don’t fool me). You want the beer to compliment the flavors in the meat, not cover up or clash with them. Me, I kept it simple and went with Coors Banquet beer. 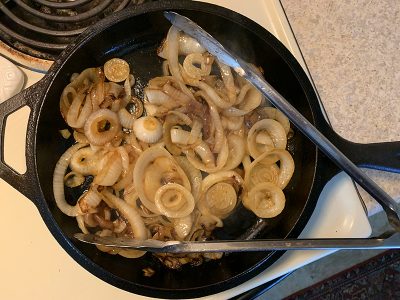 Uncap your bottle of beer and pour the whole thing into a pan big enough fit all of your sausages in. Set your burner to medium heat, and once your beer is just under a boil, gently lower your sausages into the beer to avoid splashing.

Simmer for 15-20 minutes or until cooked thoroughly, turning halfway through to cook evenly. 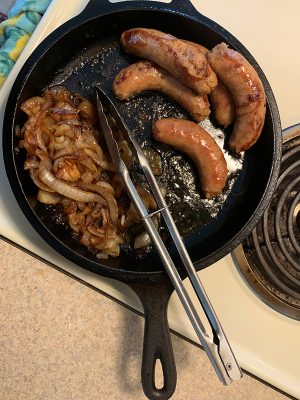 Low and slow is the name of the game here. When simmering food, the temperature is kept between 180-200 degrees, that’s lower than a boil, but hotter than poaching. This temperature allows the fat and meat to slowly denature without rending or toughening. The resulting sausages will be soft and tender, complimented by the grainy, malty, lightly herbal aspects of your pilsner beer that was absorbed into the meat while cooking.

While your sausages are cooking, peel and chop your onion into rings or slices. The midwestern way is to simmer the onions in the same pan with your brats or dogs, but I prefer the taste and texture of caramelized onions. So, in a separate pan, add your cooking oil, set your burner to medium heat, and add your onions when the oil just starts to smoke. Reduce heat to medium low if you find your onions are beginning to burn. 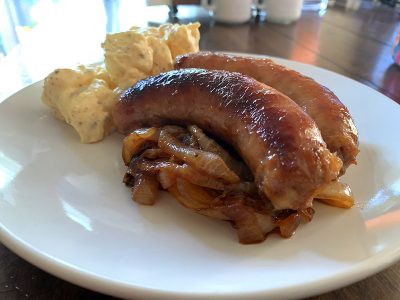 Your bratwurst should be done cooking, but your onions are still caramelizing, and this is exactly what we want. Take your bratwurst out of the beer, and put into your pan with the onions. All we want to do here is brown the outsides of the sausage and get them to crisp up a bit, and the same heat you’re cooking your onions on will work perfectly.

Once your sausages have a crispy brown outside, your meal is ready (I didn’t follow my own advice, and boiled my brats in beer instead of simmering them, causing the casing to split). Serve on a bun with the caramelized onions, or on a plate with potato salad, and enjoy eating your delicious meal with a beer of your choice. Guten appetit!