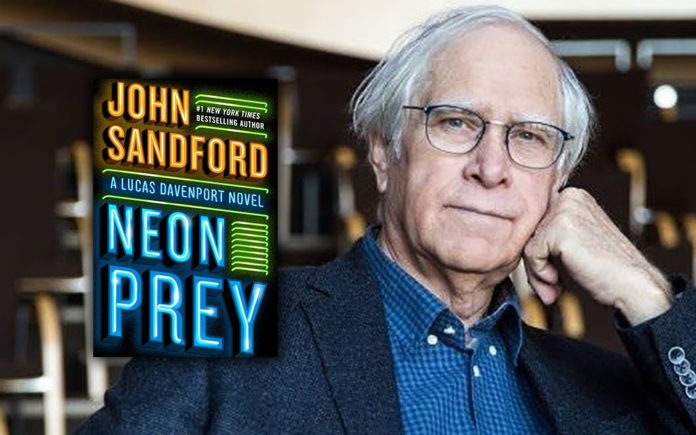 Sadly, the world has an abundance of bad people.  There are actually folks who enjoy hurting their fellow human beings.  It is hard to understand what exists inside someone that they can take a life without any thought.  In John Sandford’s Neon Prey (Putnam, 390 pages), bad guys inspire a female groupie to cross over to the dark side.

This is Sandford’s twenty-ninth installment of a Lucas Davenport novel.  Davenport is a handsome and macho US Marshall.  He is also a tech genius and independently wealthy.  As kick-ass and tough as Davenport is, he is also well-groomed and a sharp dresser.

When Deese, a low-level “enforcer” for a big-time criminal, loses his cool and goes too far beating the tar out of a guy, he gets arrested.  Deese then skips bond.  The Feds want to catch Deese in order to get to his boss.

But when they get to Deese’s rural Louisiana cabin, they discover a multitude of graves.  Deese is a serial killer – and he barbeques and eats some of his victims!

Davenport is called in to help find Deese.  Marshalls have authority to work across the country with the assistance of all law enforcement agencies.

The hunt begins and Davenport teams up with fellow Marshalls Rae and Bob.  The three get lucky and are quickly on Deese’s trail, which takes them to Los Angeles and then Las Vegas.  It is a dangerous cat and mouse game as Davenport tries to get the bad guy and his deadly gang.

I liked the Davenport character when I first discovered him.  He can beat the shit out of a criminal and still be sophisticated.  He’s smart, clever and dangerous.  In Neon Prey, however, he steps back a bit and Rae and Bob do a lot of the work.

Davenport is 52 years old.  He has had his fair share of beatings and taken bullets.  In fact, he gets blasted again when they close in on the gang.   I don’t think of 52 as that old, but it did feel like author Sandford was setting up Davenport’s retirement.  I didn’t get enough full Davenport is this iteration and I hate to see him retire.

I did like the character Rae.  She is fun and smart and maybe we will see her get her own Sandford series.

Sandford does a great job writing about bad people and horrible criminals.  I enjoy the books best when we are in the bad guy’s lair.  Sandford does not give the reader much psychological insight as to why they are the way they are, but fortunately the reader doesn’t have to spend time in their fucked-up heads.

I enjoy going back and forth between the good guys and the bad.  It’s interesting to see each side as law enforcement works to catch the criminals, while the bad guys try to get away and still make a living being thieves and killers.

Neon Prey reveals that men are not the only bad folks walking the planet and that women can become just as easily involved with the dark side.

A young women, Cox, is a character that started as a groupie to the gang.  Her boyfriend kept her in nice things, drugs, and parties.  She liked the excitement but was never directly involved in the crimes until Deese joins up.

As the horrors of the bad guys gets worse, instead of parting ways or going to the cops, she plans to get her share and leave no witnesses.  Everyone thought she was just a dumb blond, but she too can be clever and evil enough to get what she wants.

Sandford delivers a very real scenario of criminal thought and intent, while providing equal opportunity for women, even in crime.