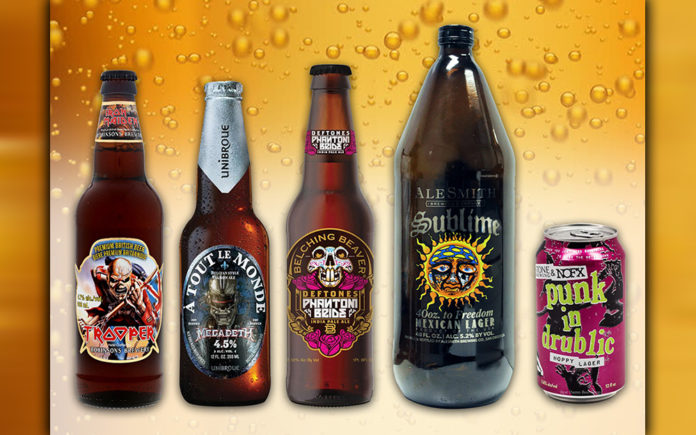 Ever since 3,800 years ago when some ancient Sumerian wrote the “Hymn to Ninkasi” – a sprawling prose that was both an ode to the ancient goddess of beer AND a recipe for some pretty bangin’ Sumerian ale – music and beer have been inseparably linked in the minds and souls of humanity. The Sumerians weren’t the first to ferment grain into alcohol (shout out to the ancient Chinese for being the first hipsters and opening microbreweries 9,000 years ago); but they were the first to put sharp twig to wet clay, and actually write their recipe down so that people would stop asking, “Aye fam, how many pounds of two-row again? What about crystal malt, is that in this recipe? You know what bro, don’t get mad at me just cuz you don’t explain things right the first time.”

Drinking songs have been recorded ever since a band of 12th century European clergymen called the Goliards, went running around making up bawdy tavern songs for drunks to sing while slamming their tankards on tables. Today’s musicians aren’t writing drinking songs, they’re creating drink. By the 21st century, artists are creating their own beers for the public to consume. I scoured the local bottle shops to find the best band beers, and got wasted on ‘em. Here are the best brews that can be found around the Coachella Valley.

Metal fans know “The Trooper” as the quintessential Iron Maiden song, so it’s only fitting that the 4.7% Extra Special Bitter has a bold flavor that leads with toasty malt flavor, earthy hop bitterness, and a citrusy, herbal finish. Casual fans of American lager may not appreciate the more fruity and complex characteristics of English ale. But, if you’re wanting something different that’s not too aggressive on the palate, pick this banger up. Available at Total Wine in Palm Desert.

Band leader Dave Mustaine says that he created this beer to be a characterful sipper, and he nailed it. A lemony, tart nose gives way to a spicy and oh-so-lightly funky flavor that is the hallmark of expertly crafted Saison. A Tout Le Monde is unfiltered, meaning you’ll see a cloudy appearance to this 4.5%, spiced ale. The flavor is coriander and cereal on the backend, and much like “The Trooper”, can come across as either too much or not enough, depending on the tastes of the American drinker. Also available at Total Wine.

A truly phenomenal IPA, that represented the state of the art in 2017. Hazy and unfiltered, this is the modern version of an IPA with low bitterness, a tropical and juicy hop profile, and a phenomenally dank nose. With a taste much lighter than the 7.1% ABV would suggest, this is an IPA that will satisfy all but the most ardent lovers of the old school style. Available at Whole Foods.

Possibly my most favorite Mexican Lager in the land, this 5.2% thirst quencher tastes like fresh corn chips in a glass. Grainy and refreshing with a dominant maize flavor, this beer was packaged in 40 oz. bottles to commemorate the seminal album of the same name, and is an example of how to create a beer that challenges expectations of a style. Out of stock at Bevmo.

An Imperial Pale Lager (IPL) that keeps the bitterness subdued while giving a grassy, resiny hop finish. Medium bodied with biscuit flavors, this was enjoyed by friends Johnny Sugarbritches and Dan Wheat as well. “Hoppy but not bitter,” Johnny says, “It’s really smooth going down the gullet,” Dan chimed in, “It’s really good, my favorite along with the Sublime beer.” A moderate drinker at 5.8% ABV, this has proven to be one of the most successful collaborations between breweries and bands. Out of stock locally, but available if you’re willing to travel out of the valley for it.

There are numerous other bands putting out offerings on what seems like a daily basis. Although distributing issues keep a lot of them from reaching our local shelves, some clever bottle trading can be done online to acquire beers from many other rock bands. And if you’re able to get your hands on them, don’t be afraid to share with your new friend, me.