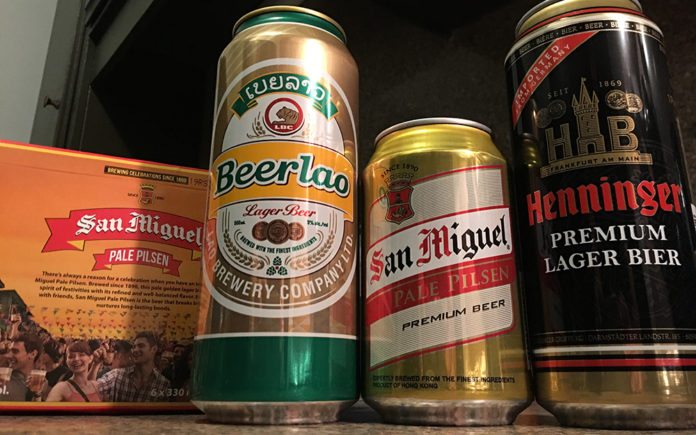 So, there I was, checking out bags of baby guavas and an assortment of mushy tomatoes in the produce section of the .99 Cent Store, when the shining glint of aluminum cans caught my eye. There are a lot of aluminum cans up in that store and most of them are full of sardines, potted meat, and Treet luncheon loaf (for those of us who can’t afford name brands like Gucci, Prada, and Spam), but these particular cans I’m referencing weren’t sitting next to the corned beef hash and Spaghetti-O’s; no, these were on a shelf next to the $1.99 wines and non-alcoholic cider, and that meant only one thing (actually, it could have meant a lot of things).

Three kinds of gloriously cheap beer, to be exact, and while the distinct possibility of sadness and disappointment awaited me with each can, I had to know. How sad could .99 cent beer be? I purchased all three, and with great trepidation, set about to review them from worst to best. Imagine if you will, little emoji of flaming dumpsters, and that’s the rating system we’re working with. I don’t make the rules folks, I just work here. So, with that in mind, let’s see how if we can get our monies worth from those tetanus shots, and start testing cans. Botulism be damned!

Hailing all the way from the Indochinese peninsula, Beerlao is brewed in the city of Vientiane, the capital of Laos. Lao Brewing Co. products are said to have won several Gold Quality Awards, but I’ll be damned if any of those are for its beer, cuz Beerlao came this close to being poured down the drain.

The first sip of this pale lager tasted only like what could be described as prison beer. According to Beerlao’s social media, this beer is made from primarily jasmine rice, with malted barley being third on the ingredient list. The ingredient list stickered onto the can lists hops as the last ingredient by volume.  I’m convinced no actual hops went into the making of this beer, but rather hop oil. The essence of hops. The idea of hops. Anything but real hops, because I’ve tasted malt liquors that tasted less artificial than this. Metallic, sour, and cheap tasting, this is the epitome of awful tasting cheap beer. On a rating system of burning trash, this can of liquid failure gets 3 dumpster fires.

The San Miguel Brewery is the largest brewery in the Philippines, holding over a 95% market share in the country! The six pack of San Miguel Pale Pilsen found in Palm Desert’s .99 Cent Store was brewed in Hong Kong as opposed to the Philippines and sold in a recyclable cardboard container instead of the plastic 6-pack holder so used in American packaging.

The ingredient list for Pale Pilsen reads in order, “WATER, MALT, CEREALS, SUGAR, HOPS”, which tells us right there that although malt (assuming its barley based) makes up a most of the ingredients, there’s still a lot of fillers going on. While ingredients like corn and rice can have their places in certain styles, the use of cereal adjuncts and sugar together in a beer as delicate as a pilsner already seems like there’s going to be some weird flavors going on. While not as offensive as Beerlao, there was still a distinctly cheap and janky taste to this product. It tasted like fermented high fructose corn syrup, which was upsetting, but I still managed to kill the entire 6-pack in a week. I still give it 2 dumpster fires.

A Munich Helles Lager imported from Germany, Henninger is a fairly ubiquitous import that can be found at most Trader Joe’s (which is basically a less depressing version of the .99 Cent Store), and while this beer is as insipid and basic as can be, at least it didn’t taste like corn flakes and soda water, which is more than I can say for the other two beers I tried. Pleasant and grainy with an actual hop bitterness to it, this beer sucked in a way that was familiar. It sucked the way that Foster’s or Moosehead sucks. This brew gets a rating of only one smol dumpster fire.

Turns out the .99 Cent Store didn’t have any good beer this week but since their stock rotates, I shall be returning there for future editions of “I drank .99 Cent Store beer”.