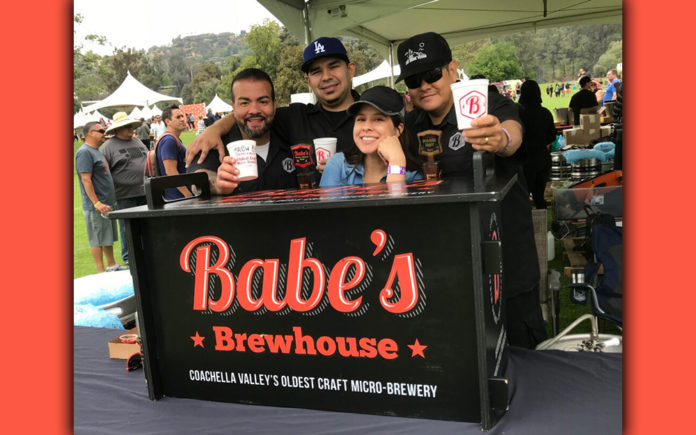 Way back when the Roman Empire was what you were a part of if you lived in Europe, people liked to get drunk. They’d carry little bags of wine or beer around with them in animal skins, usually made from sheep stomachs or something equally hideous that I’d never want to drink my IPA out of. Like a fish bladder.

See, the sturgeon is a pretty giant-ass fish; you should see the size of their swim bladders. Well ancient romans did, and someone had the bright idea to dry a fish air-bladder out and fill it with booze. And when this dude sat around with his buddies and shared beer from their skins, everyone noticed that Barry with the sturgeon-bladder bota-bag had super clear beer, while Keyshawn and Brad (Edit: Look people, I don’t know what these dude’s real names were. I mean, I’d like to think that Keyshawn, Brad and Barry were real Romans who figured this stuff out, but we’ll never know fasho, so their names are alleged at this point) with the goat-stomach beer flasks had beer that was still super cloudy (but at least it wasn’t fishy tasting). This was the beginning of beer brewers realizing that isinglass (fish bladder) was something you could clarify beer with. 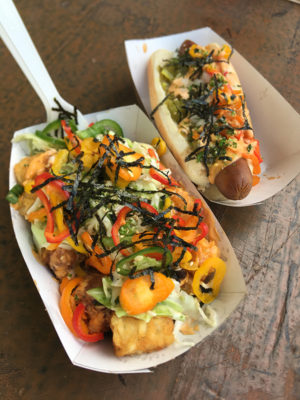 Most modern breweries have now switched over to using Irish moss and carrageenan instead of sturgeon bladders and horse hooves, and Babe’s Brewhouse of Rancho Mirage is one of them. For its fourth year in a row, Babes has represented craft beer from the Coachella Valley at “Eat Drink Vegan,” an LA festival that celebrates the plant based lifestyle. My relationship with Babe’s (former assistant brewer, current mooch of free beer) allowed me to head out with them for the second year in a row to “Eat Drink Vegan” to get tofu and bean curd wasted.

Joining Operations Manager Art Vasquez, Babe’s pastry chef Dominique Medina and her husband Raul, we set out to Pasadena’s Rose Bowl in the wee early hours, armed with a British barrel each of Blackfin Lager and Palm Springs Belgique IPA. We arrived early and secured a spot in our assigned beer tent next to Firestone Walker, who had sent the tallest and lankiest Dutchman I’d ever seen as their representative. I could only pick out one in every three words he spoke (and that’s when everyone was still completely sober), but he shared his offerings of Helles Lager and Luponic Distortion 009 with us, and both beers were excellent. 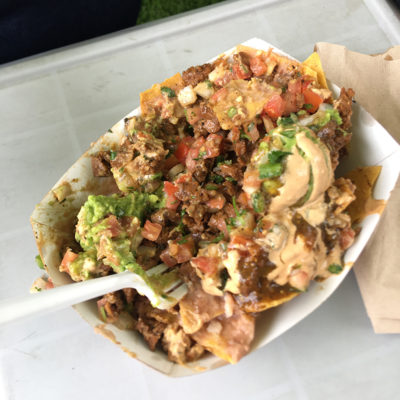 Noon came around and the VIP entrance to the festival commenced. All kinds of hippies, wooks and soy boys trode through the gates on their cruelty-free Birkenstocks. They were here to chew bubblegum and wear man-buns, and they were all out of bubblegum.

It didn’t take long for us to work up an appetite pouring pint after pint of beer from our kegs, and the first plant based food we put in our faces was from Monty’s Good Burger. Using vegan cheese and the “impossible” brand burger patty, Monty’s delivered the goods with a ton of flavor and texture.

We’re back to slingin’ beers and quenching all kinds of vegan thirst, when Dominique goes “Hey, Isn’t that Kat Von D?” My eyes scoured the layout, past a sea of green tinted hair and #vegansdoitbetter tee-shirts, but all I could find was a massively pregnant, dark haired woman wearing aviator sunglasses and a black silk muumuu, holding hands with a skinny little 98 lb. fella in a leather jacket. Turns out that was totally Kat Von D and her baby daddy, Rafael Reyes.

Art pointed just a few feet away from her, and there was Tony Kanal from No Doubt, hair still bleached blonde like it was 1997, with his wife and two children, enjoying the beautiful and cool day. With celebrity sightings checked off the list, Raul and I left our pouring station and went in search of more beer.

We walked over to Yorkshire Square Brewery, and drank “The Jonathan,” a 4.2% AVB English porter served from an old fashioned beer engine that draws beer from a keg like a water pump. We moseyed on to Beachwood Brewing and imbibed “The Fogfather: Part 1,” a juicy, 6.8% AVB New England style IPA. We ambled about to Relentless Brewing Company, and knocked back “Sour Night,” a 6.4% ABV oatmeal stout that had been sour aged in wine barrels. We tottered about until we found First Water Brewing, and chugged their 7.2% ABV “Hazey Sage and Rye.” Raul and I drank vegan beer till the love of carne was wiped from our brains, then we moved onto more food. 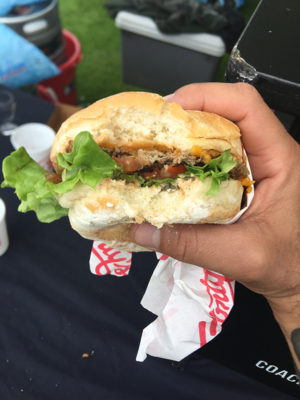 We ate plant-based nachos from Cena Vegan, meatless hotdogs and loaded tots from Sumo Dog; elote covered in vegetarian mayo and cojita. Eat Drink Vegan is as much about the food and kombucha as it is about the beer and wine. A feeling of peace and fun was in the air, and there was a positive energy that was palpable throughout the day.

So that’s it. That’s my veganfest story. I didn’t even drink myself unconscious and get twerked on by hippie chicks like what happened last year. It was really chill, no one got in a fist fight or even had a good drunken cry. Eat Drink Vegan is a very fun, annual event that attracted over 10,000 people to the Rose Bowl this year, and you don’t have to be a hippie, wook, or soy boy to enjoy it.