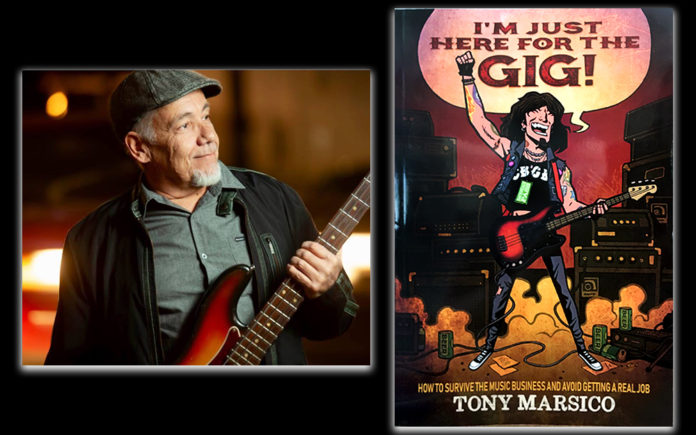 Tony Marsico has been a working musician for over 40 years now. He’s probably best known as the bassist for the Plugz, Los Angeles’ first Latino Punk band, but he’s also a world-class raconteur. He started playing music as a kid and he hasn’t slowed down. He has just written his third book, “I’m Just Here For The Gig.”

Tony has written a breezy account of his years in the business, highlighting the pleasures, pitfalls and pratfalls that come with pursuing a career in music. Along with Frank and Patty, his brother and sister, he grew up in an apartment over his parents’ Italian restaurant, Tony & Pete’s Hoagy Hut, in Philadelphia, Pa. All three kids were musical, Tony took up bass, Frank played drums, and Patty squeezed a mean accordion.

He got his start in cover bands with predictable names like The Encounters, Band Of Gold and Finesse. Life on the road for Led Zeppelin and the Who involved Mud Sharks and trashing hotel rooms, somehow those musical rites of passage eluded Band Of Gold. They endured freezing drives in groddy vans, a freak skiing accident that nearly severed their keyboard player’s tongue, and a steady diet of Denny’s haute cuisine.

Tony made it to Los Angeles and became bass player for The Plugz in the early ‘80s. He includes the typical tales of cockroach infested apartments and stories of barely squeaking by. By 1984, The Plugz morphed into the Cruzados and signed with a major label. Somehow, they came to the attention of Bob Dylan who drafted them as his backing band for an upcoming appearance on “Late Night With David Letterman.”

From then on, Tony and the band travelled in rarified air, the subtitle of this book should be “Six Degrees Of Tony,” since it seems as though he’s met and/or played with everyone. He booked his first studio session playing bass for Pee-Wee Herman, going on to record with a who’s who of L.A. musicians like Peter Case, John Doe, Carla Olson and the Williams Brothers.

Meanwhile, the band counted John Fogerty, David Byrne and Brian Setzer as fans. Cruzados opened for INXS, Joe Cocker and Billy Idol, to name a few. Stevie Nicks became so enamored with their song, “Bed Of Lies,” that she offered them a slot on Fleetwood Mac’s “Tango In The Night” tour.

The book is a heady mix of celebrity encounters and the everyday existence of working musicians. The reader has a fly-on-the-wall vantage point, watching a Glam-Metal hairstyle spontaneously combust in a Sunset Strip bar, one minute and partying with the Gold Dust Woman in her Phoenix lair in between tour dates, the next.

Tony also touches on his post-Cruzados career which included touring stints with Roger Daltrey, Matthew Sweet and Marianne Faithfull. As well as studio sessions with icons like Gerry Goffin, Willie Nelson, Linda Ronstadt Neil Young and Legendary Wrecking Crew bassist, Carol Kaye. He has also eked out a side hustle playing a musician in several movies. He’s appeared in independent films like “Georgia” and “She’s So Lovely” and crowd-pleasers like “Roadhouse” and “L.A. Story.” Along with his ex-Plugz/Cruzados compadre, Tito Larriva, he composed music for Cult Classics like “Repo Man,” “Desperado” and “From Dusk To Dawn.”

Aside from exciting detours as a solo performer, or fronting Cisco & Dewey with old pal, Darren “Dewey” Falcone, these days, Tony’s primary gig is as the leader of The Martini Kings a Jazz/Lounge combo that has released over 20 albums, and toured pretty much everywhere. While their look is retro, their sound is steeped in the now.

“I’m Just Here For The Gig” is brisk read that will leave you wanting more. No doubt Tony’s squeezing in time to write a sequel and a prequel as we speak. Maybe even a “Dirt” like screenplay centering on the seminal L.A. Punk scene. He definitely has plenty of material. Luckily for him, the journey has always been just as important as the destination.