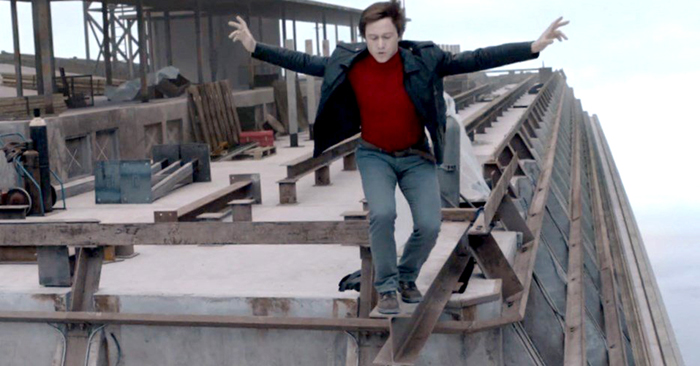 Robert Zemeckis likes making movies that utilize new technology allowing us to see something we’ve never seen before. The whole point of seeing the THE WALK is to experience — and yes, absolutely in 3D – a vivid recreation of the actual high-wire jaunt 24 year-old French daredevil aerialist Phillipe Petit made between the tops of the Twin Towers on August 7, 1974.

I was disappointed in the long, meandering preamble to the actual event. I thought Joseph Gordon-Levitt’s French accent was a bit sketchy and much of the voice-over narration was a distraction — especially during the walk itself. And it’s hard to truly discern any deep meaning to Petit’s daring stunt. But looking back on it, there is meaning because of all the sad memories those Twin Towers embody today. Here’s a chance to celebrate the exquisite madness and daring and bravery that we as a species are capable. If that’s what this movie’s really about, that’s fine with me.

This true story is as much a memorial to the Twin Towers as it is to the crazy daring of Petit. Both are indelible memories of human daring and achievement. Perhaps in some ways, this film is a kind of joyous, breathless epitaph to 9/11 as well.

There’s a youthful madness in Petit’s illegal obsession — clearly, a dangerous drug to which he’s hopelessly addicted. I liked the numerous obstacles in his path to success and the questionable crew that is dedicated to helping him.

The final act of the movie is the 30 minutes of the walk itself. The unfettered camera catches the Manhattan of 40 years ago with vertiginous verisimilitude from a dizzying perspective of 1,400 feet elevation. And it’s worth the price of admission.

A great companion piece is James Marsh’s wonderful 2008 documentary MAN ON WIRE that looks at the real Petit and his astonishing walk. Now playing. 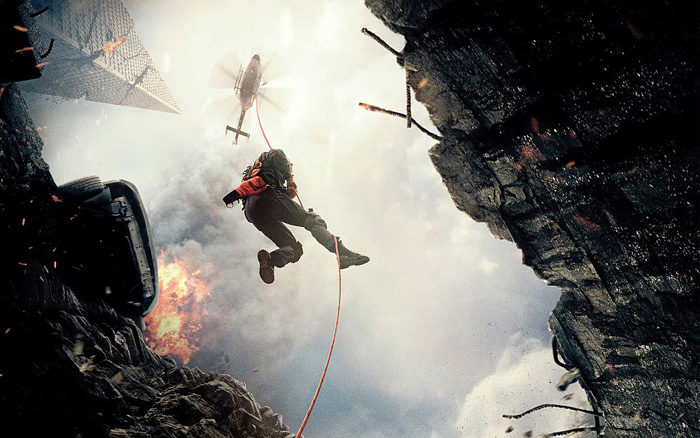 Although I missed seeing SAN ANDREAS on the big theater screen, after watching this epic disaster film in my home theater, I can say this terrific genre film lives up to the hype of its theatrical release. I loved it. Artfully directed by Brad Peyton, the film follows a rescue chopper pilot (Dwayne Johnson) and his estranged wife (Carla Cugino) as they make their way to San Francisco to save their only daughter (the voluptuous Alexandra Daddario). The family drama part is a bit by the numbers, but the eye-popping effects are state of the art and a reminder that in this modern age, anything one can imagine can be realized on the screen in ultra-realistic, utterly convincing, detail.  Earthquake movies are a sub-genre from way back, but this one fully delivers on the premise and the promise of the poster. I was hugely entertained by what I was looking at and the winning screen charisma of Johnson. The 3D version is great looking and admittedly adds some thrills to the experience, but the standard 2D is more than acceptable. Those of us living on the San Andreas fault line know that the “big one” is not a matter of if, but when. This movie makes that nightmare real, but even the dreaded quake is no match for Dwayne “The Rock” Johnson.    Warner Bros.  Blu-ray 3D.  Recommended. 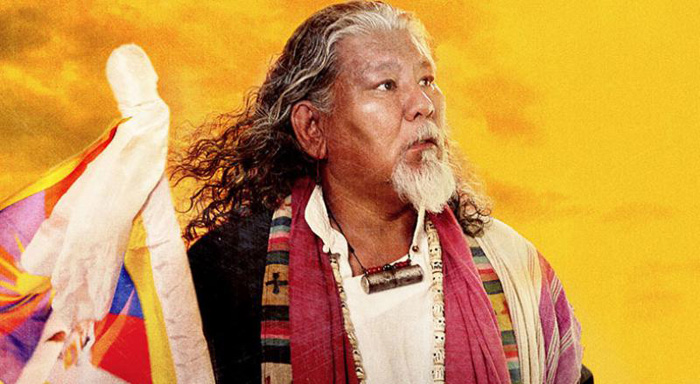 Loten Namling, a Tibetan musician living in exile in Switzerland, is devastated by the self-destructive ways his people have protested the Chinese. Filmmaker Dodo Hunziker follows Namling as he fights for his people the only way he knows how: making his way to the Dali Lama to seek his help and wisdom.

For more than 60 years, Tibetans have been fighting Chinese oppression. But their non-violent struggle appears to be in vain. Now, as a new form of peaceful protest, Tibetans are setting themselves on fire! Namling is deeply disturbed by such horrific self-destructive action. So he sets off on a two-month trek from Europe to India. It’s a one-man mission to meet top politicians, experts and young radicals. He himself becomes increasingly radical, and is on the verge of violent protest. Finally, he ends up in the Dali Lama’s office in India, hoping to find answers to the wrenching dilemma facing a people under attack. This sensitive documentary boldly explores the limits of non-violent protest as one man fights for freedom of his people.  Garden Thieves Pictures.  DVD. 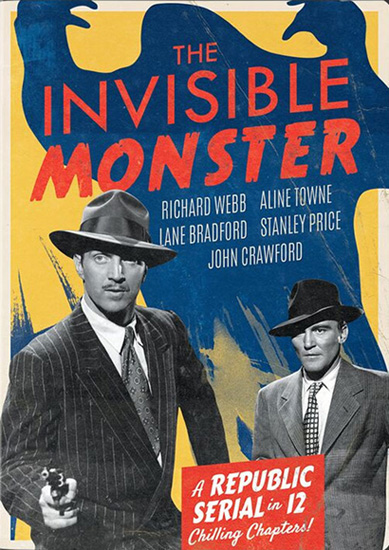 One of my guilty pleasures is binge-watching old movie serials. I love speeding through the chapters like reading a pulp murder mystery.  This one from 1950 was made near the end of the serial fad that really took hold in the 1930s as a way to lure patrons, young and old, back into the theater week after week. Republic was a mainstay of producing these mostly low budget — often ludicrous — action dramas. The plot of the THE INVISIBLE MONSTER is about an evil genius known as The Phantom Ruler who develops a formula, that when applied to clothing, makes the wearer invisible. Using four illegal European aliens as his minions, the Phantom goes on an unchecked crime spree to finance an invisible army in a woefully misguided effort to rule the planet! Good plot, huh? This 12-part Republic serial follows insurance investigator Richard Webb as he attempts to discover the Phantom’s true identity and arrest him before it’s too late.  Total running time is a surprisingly tight 3 hours.  Olive Films.  Bly-ray.