See this 30 year old photo? In the middle of the picture, that’s San Diego’s Beat Farmers. The celebrated Cow-Punk band had just finished a free benefit show with proceeds going to the Leukemia Society’s Palm Springs chapter.  I am the fresh-faced and nubile wench in the stripe-y dress, DJ Dave Field, who had recently begun his career at Zeldaz, is standing on a chair far right. On the bottom, is teenage bon vivant, Jack Epsteen. But it’s the guy on the far left that you need to focus your attention on. The dude with the big grin and the cigarette, that looks a little like Benny Hill. That’s Phil Liebert. 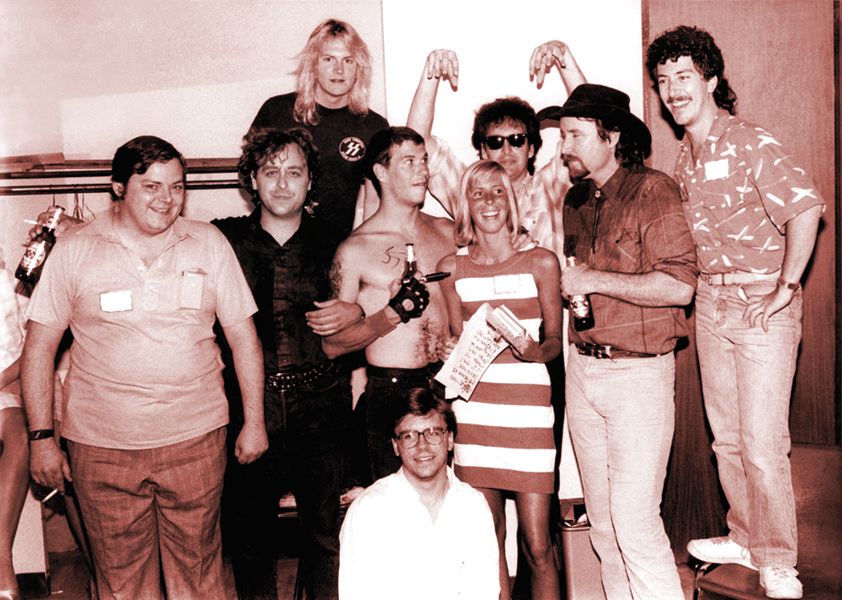 Local acts opened that night, Across The River, which was one of Mario Lalli’s first bands (it included Scott Reeder, Mark Anderson and Alfredo Hernandez), and Doted Swiss which featured Mikael Jacobson and Jeff Whipp.  As it happens, my mother, Irene was the Executive Director for the Leukemia Society. I talked her into the event. I also curated the bands. The cover charge was $10. I made sure Phil got in for free.

Phil passed away this week, succumbing to health issues that had plagued him the last few years.  Maybe you’ve never heard of him, but he influenced countless local Desert Rock musicians over the years.

I first met Phil in the early ‘80s. I was in my late teens and he was over 30. He would spend hours hanging out at the Record Alley, (the original location up on North Palm Canyon, next to KDES Radio). A walking musical encyclopedia, Phil could wax rhapsodic about the New York Dolls one minute, James Brown & His Famous Flames the next, or give you an impassioned soliloquy on Sun Ra or NRBQ all with equal fervor. He worked as a fry cook at Denny’s but he was passionate about one thing: music.

He befriended a lot of the young kids that would come into Record Alley looking for Punk or Kiss records. He would steer them toward more esoteric choices, expanding their horizons whether they were ready for it or not. He ended up influencing kids who formed their own bands. Some of those guys were Zach Huskey, Sean Wheeler and Mike Moracha; all three became Desert Rock legends.

When Record Alley relocated to Palm Desert Phil worked there one day a week, taking the bus all the way from Palm Springs to Palm Desert.  I was working for the Wherehouse music retail store in Palm Springs. I talked the manager, Karl, into poaching Phil and hiring him at our store. He worked there three years. In that time he made me mix tapes of bands like Big Star and Zakary Thaks, Robyn Hitchcock, John Coltrane and Duke Ellington. He recorded Bob Dylan bootlegs and made me a Psychedelic compilation called “Acid Rain From Paisley Skies.”  Even though I have nothing to play them on (six cassette decks in this house, none of ‘em work), I still have all the cassettes he made me.

I don’t know much about how Phil grew up. I think he was from the San Diego area. He had a dad who helped him from time to time. He had a brother and two sisters he was estranged from. He was drafted and spent part of the Vietnam War stationed in Germany.

Even after he stopped working at Wherehouse he would come in a couple of times a week just to talk about music. I always thought Phil would have made a perfect free-form radio DJ. He wasn’t one of those tedious Baby-Boomers that thought great music ended with the ‘60s. He remained fully engaged in the music of right now.  It was rare that you could bring up a band-old or new-that he didn’t have a working knowledge of. I was pretty pleased that I managed to turn him on to the Rival Sons a few years ago. The last time I saw him I did the same with Sir Madam and the Empty Hearts.

Phil was quirky and passionate, and he did have his manic moments. Sometimes he drank too much or smoked too much and maybe talked a little too long about Blue Oyster Cult (One time he assured me one of BoC’s songs included the couplet “Just you and me and Phil Liebert”). Sometimes he wore me out, but after a couple of days I was really glad to see him again.

Phil doesn’t have any family left and there won’t be a service, so I am grateful to Tracy the publisher and “her man” for allowing me the space to pay tribute to Phil and grieve a little for his loss.  I am also including tributes from a few people you may have heard of.

“I met Phil in the early 80s at Record Alley. No one knew music like Phil did. He loved to get some alcohol, take me to his tiny apartment and play the most out there music imaginable on this little blue plastic keyboard. He knew absolutely nothing about scales, keys or music theory, but he would turn into a mad white Cecil Taylor before my eyes…it was scary as shit. He also had the most addictive personality of anyone I have ever met in my life. Last time I saw him in the hospital recovery place he told my son Sage how awesome the drugs were that they were giving him. We were all laughing our asses off. Very intelligent, annoying, unique, a one of a kind, loveable guy.” Zach Huskey/Dali’s Llama

“Fuck…I really wanted to hang out with him again. I will have to find his mix tapes…. I never threw them away. Can, Faust, he turned me on to Captain Beyond, Frost, Sir Lloyd Baltimore. I mentioned Phil in an interview my band did. He got me into scores of obscure bands. We bonded on B.o.C. big time.” Mike Moracha/Hornss

“Noooo!  Phil was the first delightful weirdo I met-who made me seek out more like him. He was also one of the kindest people on the planet. He turned me on to so many bands, too many to count. I recently found some cassette tapes of the 13th Floor Elevators he made me. Such a sweet, wonderful  guy. The world needs more Phil Lieberts.” Jon Schroeder/writer-producer “Bob’s Burgers”

“I worked with Phil at the old Record Alley location in Palm Springs. Phil’s music knowledge was unsurpassed. Every day was either a lesson on music from the past and a subsequent listening to the group he was into that day. Or he would walk in and immediately ask if I’d heard the new (enter artist/album here). Most of the time, you would see him walking with a handful of albums. Sometimes I wouldn’t see Phil for a long period of time but he would always open the conversation with “hey Mike, how are you doing? Have you heard the new _____album?”  Quirky, sometimes strange, but very nice, intelligent guy. He will be missed.” Mike Keane/former Program Director Desert Radio Group

“When I first met him it was at Wherehouse, he would hang out in the store giving our customers tidbits of little-known trivia about whatever CD they picked up. I was always in awe of how quickly he could name a producer or person that just sat in on an album, or what year a song was really written, rather than when it was released. I will miss that. His excitement was infectious. He could introduce you to an obscure artist that would end up being your new favorite band.” Lauren Ivy Holm/Record Alley

“This is a bummer, he was my music mentor.” Brett Sailor/graphic artist

“R.I.P. friend. He was armed with a record player, tape deck and insane knowledge about music. It got scary when he would go off on his keyboard in that dingy, 200 square foot bungalow!” Scott Brooks/Hot Beat Pussy Fiend

“My friends and I would ride the Sun Bus to Palm Springs and go to the Record Alley back when I was 12-13 years old. Phil would always engage us with such passion, enthusiasm and ridiculous knowledge. I remember him telling me who Naz Nomad and the Nightmares were and blowing my young curious mind. R.I.P.”  Jerrod Elliott/Yawning Man