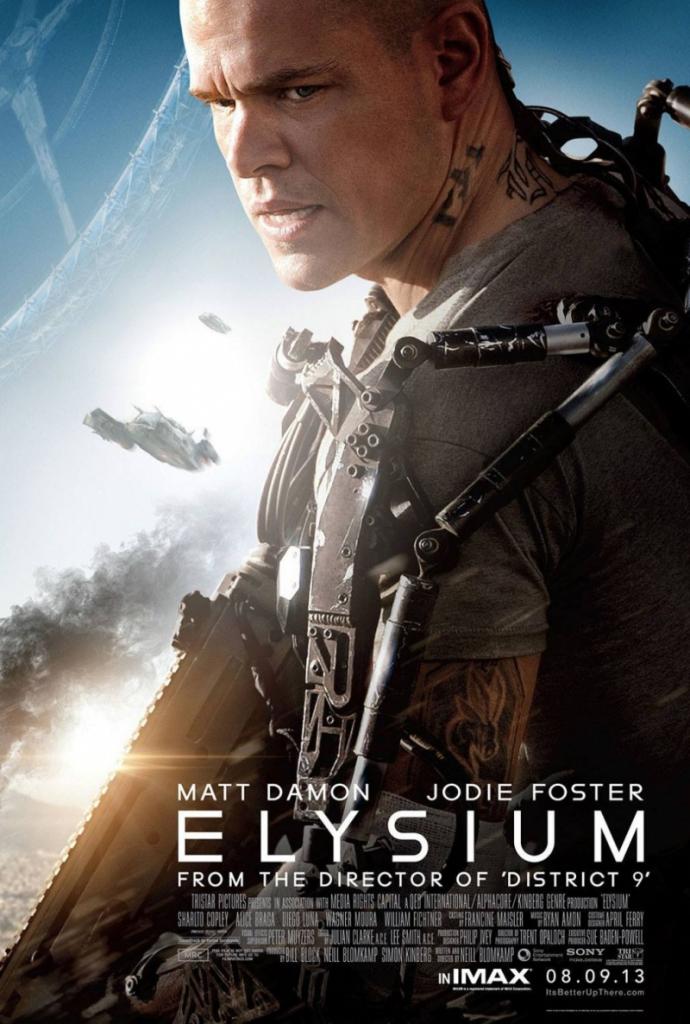 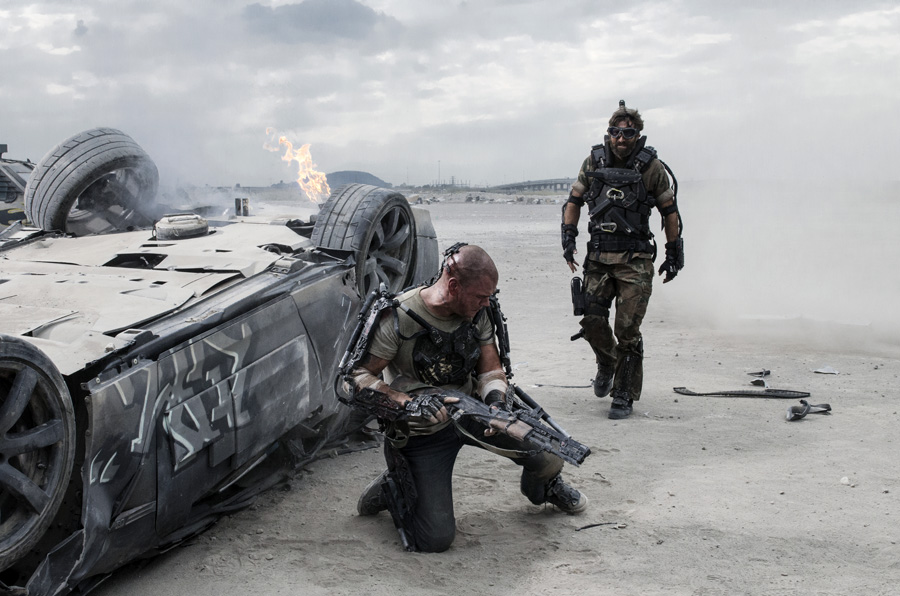 Writer director Neill Blomkamp is a major filmmaking talent with an extraordinary gift for making vividly real impossible worlds of meaning and relevance. He dazzled us with the modestly budgeted DISTRICT 9. Now he broadens his vision with a similarly themed film of the haves and have-nots in a future that has a corrupt, orbiting, heavenly escape for the very rich one per-cent.

It’s 2154, and the exploitation of the earth and the overpopulated poor has reached a point of no return with the 99% stuck on a ruined and ravaged earth while the elite orbit in an artificial world of pristine splendor and ease.

Matt Damon is Max, a regular guy on earth in desperate need of medical care that the only orbiting space station can provide. Only problem is the stringent immigration laws of Elysium that are lethally enforced. Max takes on a dangerous assignment against the all-powerful forces of the space station. His own life — and possibly that of the earth’s population — hangs in the balance.

In the last years or so, there’s been a plethora of apocalyptic or alternate world movies, I can think of at least half a dozen. This sci-fi action film really worked for me. I love the notion that only two classes of people; that is, the super rich and the utterly impoverished remain. And of course a hero who risks everything. The biggest thing Blomkamp’s visually stunning and often thrilling film has going for it is the incredibly real world of the story. Never for a minute did I doubt what I saw on the big screen. The astonishing detail is ultra photo realistic and some of the action sequences are truly mesmerizing. When Blomkamp was asked if this movie was a future he envisioned, he said, “No. It is now.” Besides Damon, costars include Jodie Foster, Sharlto Copley, Alice Braga Diego Luna, Wagner Moura and William Fichtner. Recommended. Now playing at Cinemas Palme d’Or. 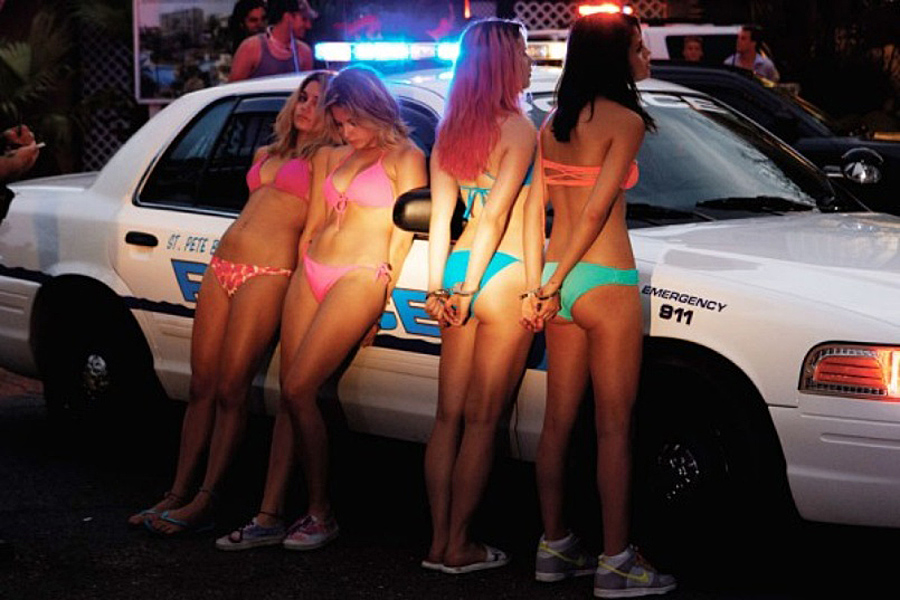 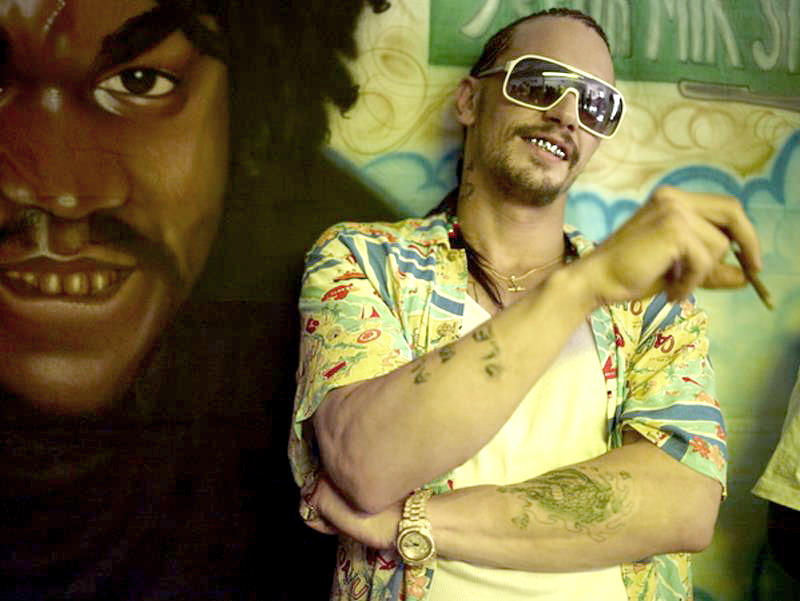 Harmony Korine is a quirky, unflinching filmmaker. Have you seen KIDS, julien donkey-boy or GUMMO? Here he has concocted a dangerous hedonistic adventure about four girls, friends since grade school, who are now bored college dorm mates longing for some real fun. If they can save enough money for spring break, well, just think of the possibilities! But when they encounter rapper Alien (James Franco in a must see performance), dangerous new options open up. Just how far will the girls go – assuming, of course, they survive? 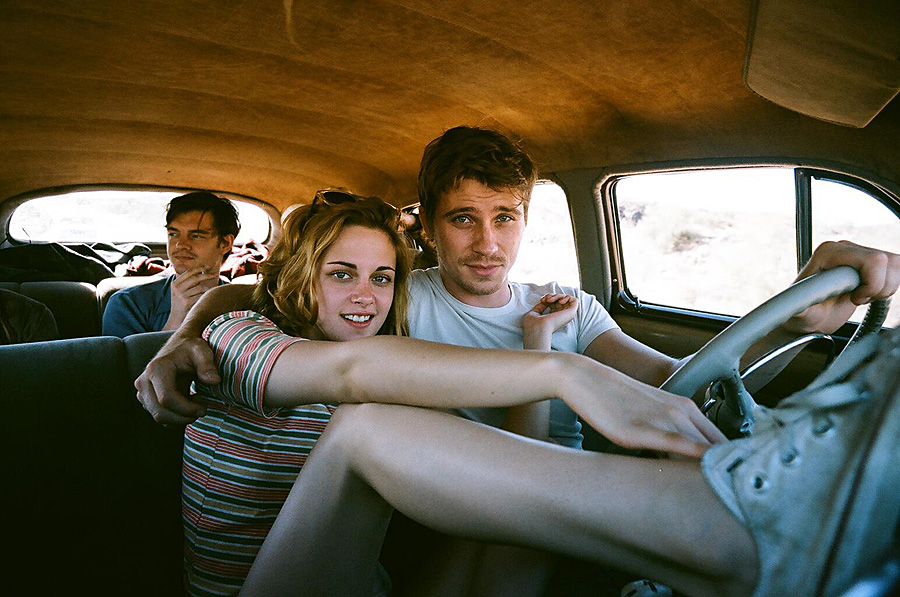 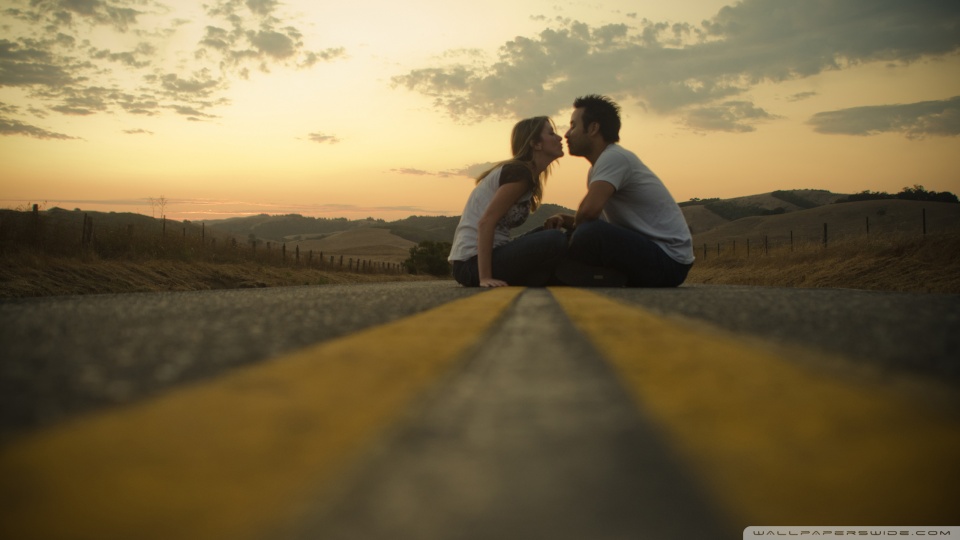 Frankly, I was bored watching this nicely photographed and rather faithful adaptation of Jack Korouac’s iconic novel. Sadly, there is not much energy in the road trip of Sal, Dean and Marylou as they search for themselves. There’s an attempt to capture the tone of a post WWII beat culture that sometimes connects. But a lot of it seemed forced under the direction of Walter Salles, who gave us THE MOTORCYCLE DIARIES, a pretentious film with a devoted following of Che devotees.

The one surprising thing that stood out for me was the fully informed, even passionate, portrayal of Marylou by none other than Kristin Stewart. She comes alive here in ways her two costars, with all their posturing, preening and posing, never manage. It’s a revelation and so far removed from her lifeless TWILIGHT character. IFCfilms. Blu-ray. 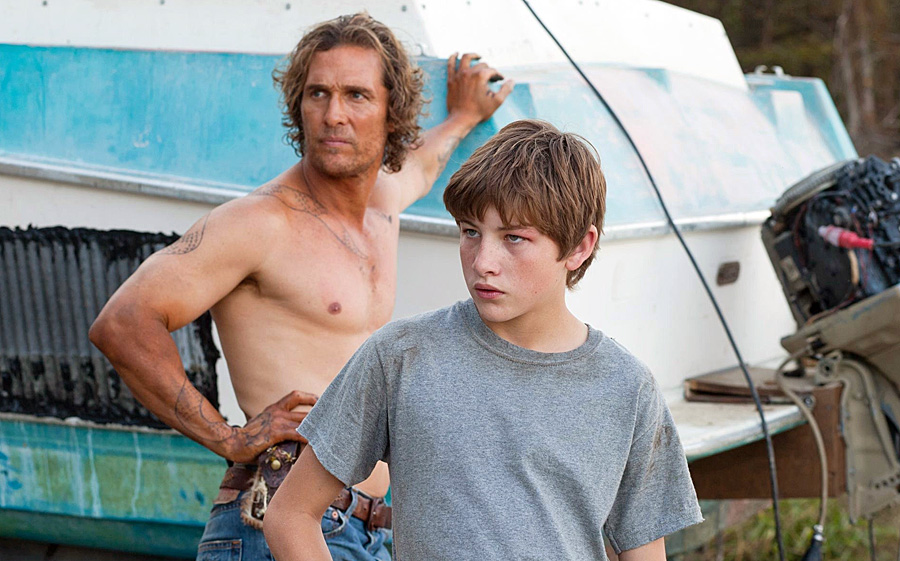 Matthew McConaughey is Mud, a fugitive who admits a murder, hiding on an otherwise deserted island on the Mississippi. He’s living in a boat stranded up a tree. Two fourteen year old boys, Ellis and Neckbone, stumble across him and an unlikely, dangerous, friendship triggers a memorable coming of age adventure that has a lot to say about the vagaries of love when Mud asks the boys to contact Juniper (Reese Witherspoon) Mud’s great on-again off-again love.

This wonderfully atmospheric Southern drama has potent Twain DNA, but writer director Jeff Nichols manages to make it both contemporary and timeless. I thought not only of Huck and Tom but also Scout and Jem. This old-fashioned, highly suspenseful story is honest and poignant without being cloying. I was fully engaged and lost track of time — so rare with movies these days. Don’t miss the terrific film form the writer director of equally compelling TAKE SHELTER. Highest recommendation. Lionsgate. Blu-ray.