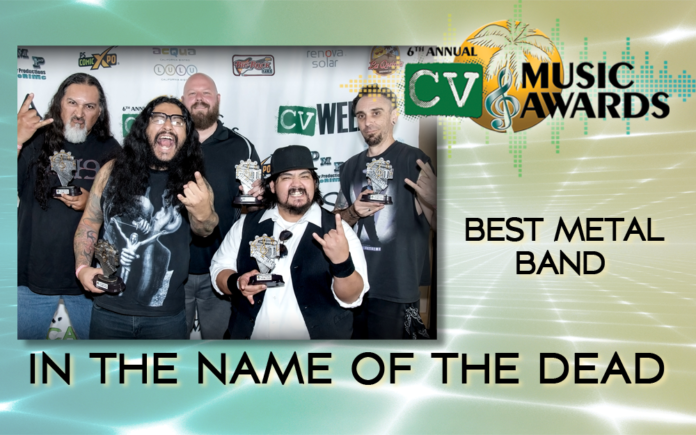 One of the most persistent metal bands of the last decade in the Coachella Valley is In The Name Of The Dead (ITNOTD). Their signature “desert death groove” is facilitated by Luis Diaz (guitar), Tetsuo “Tut” Olivares (vocals), Robert “Woody” Wood (bass and vocals), Justin Cira (drums) and Ruben Torres (guitar). ITNOTD are groovy, heavy and fast with a classical twist. ITNOTD released their EP Chaotic Psychosis in early 2018 to an eagerly awaiting metal audience who supported them in all respects by voting them the winner of the 2018 CVMA for ‘Best Metal Band’. Read our conversation below.

CVW: What is the state of metal?

Diaz: “It’s looking good, a lot of younger kids coming up, keeping the metal alive. Nationwide it’s still going strong! Many older bands that I grew up listening to are still going strong in all genres of metal. Globally? Fucking amazing!”

Wood: “Nobody in the mainstream seems to care, but we are all still out here doing our thing regardless. There’s not a lot of venues around here who are willing to have metal bands play cause they think that we’re gonna cause riots and sacrifice goats. You have to have at least 400 people before a goat gets sacrificed. So we’re not pulling that in the valley yet. Mostly it’s us trying to build a scene here. There are no ‘all ages’ venues so the kids who are into metal have nowhere to go.”

Torres: “In the desert there’s an emergence of younger metal on the rise, which is awesome. I think some old guys are due to make a re-emergence to even things out, “wink, wink”.”

CVW: What is the mortality of ITNOTD?

Wood: Like all good things, we won’t know it’s over until well past the point we should have quit.”

CVW: In your eyes, what have you accomplished thus far as a band?

Wood: “Creating music we like to play, playing with bands we like to hear. And probably a few dozen gallons of sweat poured out onto garage and stage floors. We make between three and seven new fans every show so we figure in about 20-30 years, we’ll be bigger than the Beatles, who were bigger than Jesus!”

Torres: “Seniority. The Dead have stuck it out through thick and thin for a long time. I’ve only been in the band two years now, and we’ve seen the scene fluctuate just in that short amount of time. Imagine the nearly ten years for the rest of the guys.”

CVW: Give me one music-related critique you have of yourself.

Wood: I play left-handed, which everyone else hates. I have trouble playing slow tempos. I am not musically trained.”

Torres: “I wish I could put in more time to practice. I like my guitar playing ability as is. I think after twenty years of playing I’m finally learning to like where I am ability-wise. I never thought I would say that.”

CVW: What needs to happen for metal to thrive?

Diaz: “Nothing, it has outlasted most other genres of music and without media attention. As long as there’s some young kid with angst towards the “norm” there will be metal!”

Wood: “People getting out and going to see bands.”

Torres: “Metal is thriving as much as it ever will or can right now. I think what will help metal thrive within its own communities is to abolish the idea of competition. A lot of the mentality in music communities, no matter the genre, is, ‘trying to do better than the last band’. Honestly, if everyone just wrote the music they like and it’s from the soul then any genre would thrive.”

CVW: What artists influenced you and who are you into at the moment?

Diaz: “I’m still into the bands I grew up listening to; Iron Maiden, Judas Priest, Slayer, Megadeth, Possessed, Kreator, Death, Cannibal Corpse, Deicide, Nile, Satyricon, SEPTICFLESH, FLESHGOD APOCALYPSE… I could go on but that would be a long list. What originally got me into metal was the artwork. The first album that I saw was Iron Maiden’s Killers. I think it was in 7th grade. I happened to be in class with a bunch of metal heads. I was watching all these tapes being traded. I asked one guy if I could check it out. I took it home and listened to it. It just blew my mind. I went back the next day. I asked if he had any more. He gave me Slayer, Possessed, Megadeth and Metallica.”

Wood: “I listen to NPR. There’s so much inspiration from the state of affairs in this country and the world as a whole. Headbanger’s Ball is what really got me into metal early on. Pantera, Slayer and Sepultura were my favorites. The Alice In Chains album Dirt is my favorite album. As I started playing in my late teens and into my twenties I wasn’t very good so of course punk rock was the way to go. I wanted to play faster and louder.”

Torres: “I’ve found myself revisiting my childhood recently with a lot of Michael Jackson. I’m also listening to Unleash the Archers and PSY.”