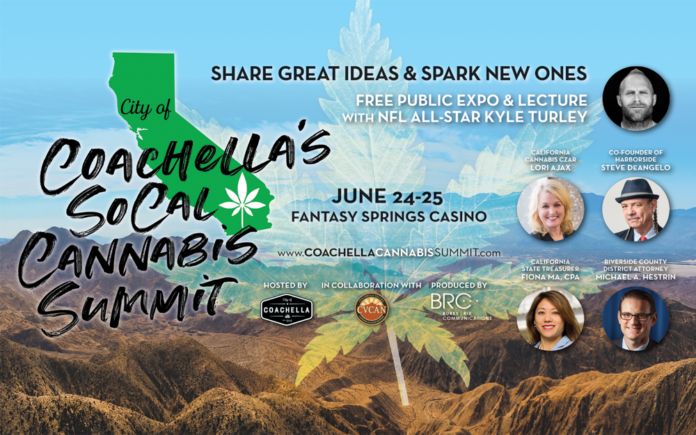 Steve DeAngelo, who has spent four decades leading the cannabis reform movement and once dubbed “The Father of the Legal Industry,” will deliver a keynote speech at the City of Coachella’s SoCal Cannabis Summit on June 24-25th at the Fantasy Springs Resort Casino.

The SoCal Cannabis Summit is bringing together leaders in business and government, as well as former NFL star Kyle Turley, to share ideas and unveil new opportunities in the growing billion-dollar cannabis industry. The event is hosted by the City of Coachella in collaboration with the Coachella Valley Cannabis Alliance Network. Local government affairs and advertising firm, Burke Rix Communications, is producing the Summit in partnership with the City of Coachella.

DeAngelo authored “The Cannabis Manifesto,” and was an originator of the wellness approach to understanding cannabis.

His notable business achievements include founding Harborside, one of the first six dispensaries licensed in the U.S.; Steep Hill Laboratory, the first cannabis testing facility and analytics company; and the Arc View Group, the first dedicated cannabis investment network.

As an activist, DeAngelo played a key role in the passage of Initiative 59, Washington DC’s medical cannabis law; the passage of Prop 64, California’s adult use law; and successfully defending multiple legal attempts by US federal authorities to shutter the doors of Harborside.

Among the other speakers added are Parrot, the director of CalCannabis, a division of the California Department of Food and Agriculture that licenses and regulates commercial cannabis cultivators; Adrian Sedlin, the CEO of Canndescent, a market leading cultivator of ultra-premium cannabis products currently ranked #1 selling Cannabis flower in California; and Patrick Henning who has served as director of California’s Employment Development Department since 2014.

In addition to the summit, the event will host a panel that will be free and open to the public at the Coachella Public Library called “Compliance After Licensing.”

The panel, which will be from 2-4 p.m. on June 24 will help individuals stay in compliance as a “California Cannabusiness.” The issues covered will include business registration, taxes, insurance, workers compensation, occupational health and safety, and labor protections. Specialists from the Secretary of State, Franchise Tax Board, Employment Development Department, State Compensation Insurance Fund, CAL/OSHA, and the Agricultural Labor Relations Board will be on hand.

Shortly after the “Compliance After Licensing” event on June 24th, Summit attendees are invited to attend a welcome reception at the Coachella Public Library from 5:30 p.m. to 7:30 p.m. sponsored by Lagunitas Hi-Fi Hops, the Lighthouse Dispensary and Big RockPartners.

Headlining the Summit on June 25th from 9:00 a.m. to 4:00 p.m. is California Cannabis Czar Lori Ajax, Chief of the Bureau of Cannabis Control who will give an update on the Cannabis industry in California as well as participate on a panel discussion on licensing and permitting. Riverside County District Attorney Michael Hestrin will speak on the state of cannabis laws and enforcement in Riverside County. State Treasurer Fiona Ma will address banking issues and challenges faced by the cannabis industry. Former NFL star Kyle Turley’s presentation will be open to the public and he will share his personal story of getting off prescribed opiates for football injuries using CBD. Kyle played offensive tackle for the New Orleans Saints, St. Louis Rams and Kanas City Chiefs.

City of Coachella Mayor Steven Hernandez said, “The City of Coachella is excited to be hosting this Summit. The cannabis industry is a major economic driver for the region and especially the City of Coachella where it has paved the way for cultivation, manufacturing, testing and dispensary businesses. It is our hope that this Summit will help foster the critical collaboration needed between those who want to get into the cannabis industry, those who are currently in the business and the government entities that create policy, regulate and enforce it. “

The Summit kicks off with a bus tour on June 24th where attendees will get a rare, behind the scenes look at the wide array of cultivation, manufacturing, dispensary and lounge facilities throughout the Coachella Valley, as well as learn about new opportunities on the horizons. The popular CannaBus Express Tours will be providing their VIP high-end Mercedes buses for the tour. 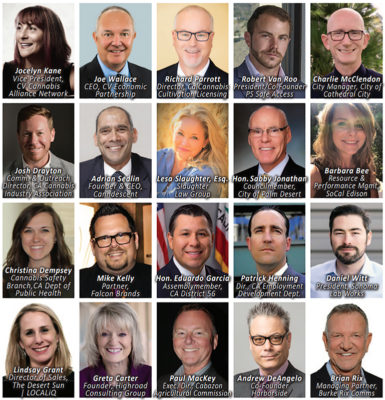 The second day of the Summit on June 25th features a full day of educational programing and a FREE informational cannabis expo showcasing many of the services and products geared towards the industry and everyday consumer. The general public is also invited to attend the Summit’s closing speech by NFL star Kyle Turley at 3:35pm and meet him during the closing reception from 4-6 p.m.

Lori Ajax: Became the first chief of the Bureau of Cannabis Control when it was formed in 2016. Prior to her appointment by Governor Brown, Ajax was the Chief Deputy Director of the Department of Alcoholic Beverage Control, where she spent 22 years working her way up the ranks.

Fiona Ma: Ma has been at the forefront, helping to pass and implement a comprehensive regulatory framework for MCDs and legalization of recreational use of cannabis in the state, helping to introduce, support and negotiate seven pieces of legislation that has been instrumental in moving the industry forward. Prior to being elected as the state treasurer, Ma represented the 12th Assembly District from 2006-12. She was the 112th woman elected to the California legislature and first Asian woman to serve as Speaker Pro Tempore since 1850.

Kyle Turley: The eight-year NFL veteran was first-team All Pro in 2000 while playing offensive tackle for the New Orleans Saints. Turley credits cannabis for helping him deal with numerous neurological health issues, including chronic traumatic encephalopathy (CTE), early onset Alzheimer’s disease, a seizure disorder, suicidal thoughts and vertigo. Turley uses cannabis to treat his neurological disorders and credits it for improving his quality of life after previously relying on numerous prescription drugs, which he quit cold turkey in 2015. Also in 2015, Turley founded the Gridiron Cannabis Coalition to help advance policy change in the use of cannabis in professional sports.

Tickets to the Summit are $50 per person for the Bus Tour on June 24th and $75 per person for the Summit program on June 25th with both available online through the Summit’s website; www.CoachellaCannabisSummit.com. The full program, speaker lineup and additional information about exhibition and sponsorship opportunities maybe be found online or by contacting Josh Zipperman at Burke Rix Communications via email at Josh@BurkeRix.com.