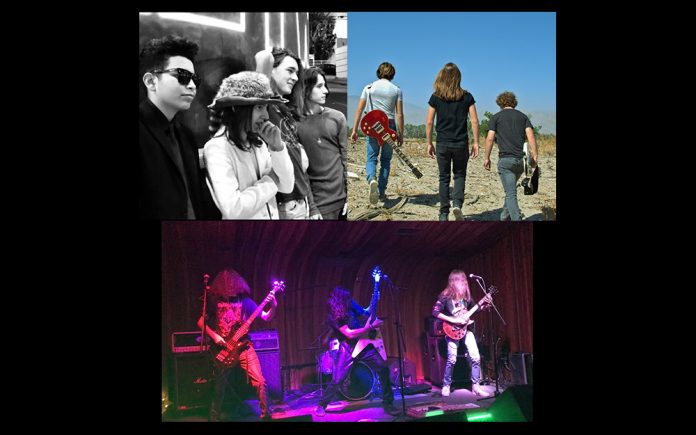 The Best Youth Band category at the Coachella Valley Music Awards can be a slippery slope for younger bands. Introduced in 2017, the category has accelerated the success of victorious bands such as The Brosquitos, FrankEatsTheFloor and Pescaterritory into award-winning artists with promising futures. Past nominees include Yip Yops, CMFs, Traveler and UU. The category requires that all members be under 20 years old and as these musicians develop and progress, there is an easier said than done emancipation from the ‘youth band’ moniker. Despite this challenge, we are in good standing when it comes to the burgeoning of heavy music from our “younger” bands in the Coachella Valley.

CVW: Why is it important to you to play Hard Rock?

Mark (Instigator): “Hard Rock/Heavy Metal is my life, it’s what drives me. I feel as if other people deserve to witness the power and inspiration of Heavy Metal, just as I do.”

Garrison (Instigator): “For me, it’s important to play Metal because it’s such a rejuvenating kind of feeling. It’s so chaotic and insane but in it is something so raw and it just pulls you into the sonic onslaught.”

Gavin (Pescaterritory): “It’s important to play Hard Rock because it shows a sense of freedom. The genre is very versatile and always lets me play what I want. It allows me to play heavy to more dynamic music.”

Jake (Silver Sky): “Why? Because that’s the good shit! It’s our common ground too.”

Noah (Silver Sky): ”It’s what we’ve grown up with and what we see as the future of the music industry. It’s a circle. And we’re here to fuck shit up.”

Jason (Pescaterritory): “I couldn’t care less about some silly genre title, I care more about the music being made, whether it be hard or soft, I don’t care, as long as it’s good music with some heart behind it. As a guitarist, I am most influenced by Jimmy Page, David Gilmore and Eddie Van Halen, so there’s some Hard Rock inspiration there and certainly on the others as well, but I don’t think our music can be summed up as Hard Rock or Metal, or any one genre for that matter. There are some progressive elements in our music, for instance our latest original The War is a 10 minute suite that moves section to section encountering shifts in dynamics and styles. But we also have other songs like King Street which is just a dirty Rock and Roll song. I am fine and dandy with a Hard Rock track just as I am with an acoustic love song

CVW: Why do you feel we should no longer view your groups as “youth bands”?

Garrison (Instigator): “Well, for starters, we’re all over 18 in Instigator, hahaha! But besides that, I don’t think we should be considered a ‘youth band’ because we’ve been playing and building our reputation for almost three years, and it’s time to let that tag go and be a band that doesn’t ride off our age.”

Mark (Instigator): “Instigator is not a youth band because we don’t play like one anymore, haha! Also, we’ve really outgrown the prime youthfulness that we had when we started this band.”

Gavin (Pescaterritory): “We shouldn’t be viewed as a ‘youth band’ anymore because we want to take this seriously. We want to take our band to the next level. We are not doing this just to do it. We were all born to play music and are achieving our goal. I feel the word ‘youth’ kind of lowers others’ expectations of us because we are labeled as the ‘kid band’. But when people hear us play, they think we sound advanced.”

Jake (Silver Sky): “Plus youth implies we aren’t as good as an adult band.”

Jason (Pescaterritory): “Well obviously we are youths, no denying that, but the music we are making does not sound childish or immature. When the umbrella term ‘youth band’ is thrown around, it turns the importance away from the music and towards our age. I couldn’t care less if we were 10 years old or 30 years old, the music is the same. I’d rather us be addressed as musicians just as everybody else is.”

CVW: What are your thoughts on each other’s bands? How do you or can you help each other further the genre?

Mark (Instigator): “Pescaterritory and Silver Sky rock! We love playing shows with those guys, it’s ALWAYS a blast! And of course, both bands feature Nick Willman on the drums! Nick is a good friend and a true bad-ass behind the kit haha!”

Garrison (Instigator): “I love both Silver Sky and Pescaterritory and what they’re doing. They have passion and it shows. I think these three bands can further the Rock genre by getting their music to the teens because they have so much influence that it can spread like a virus.”

Noah (Silver Sky): “We learn from each other and support one another because we’re all in this together. We all have the same goal.”

Gavin (Pescaterritory): “I think Instigator and Silver Sky are great. They do a lot for the music community and really get the word out. They bring out crowds to their performances and have loyal fans. We can each help each other by playing shows together and help with exposure and experience. We all want to do the same thing, to ‘make it big’. And we accept that we are the next music generation in the valley.”

Jason (Pescaterritory): “Both Instigator and Silver Sky are immensely talented. I haven’t spent any time with Instigator, but I’m looking forward to in the future. The guys from Silver Sky are great people. Obviously I love Nick, he’s incredible. Jake and Noah are both dedicated to their craft and masters at what they do and have always been a pleasure to be around.”

CVW: How do we keep Heavy Metal/Hard Rock alive?

Mark (Instigator): “Keeping it alive is a goal of ours, and I think these other bands can agree. I think we need to put Heavy Metal shows back in the mainstream of today’s generation. We need to show our peers how incredibly fun and outstanding it is. The kids need Marshall stacks and double-bass drum sets pounding their faces and hearts.”

Gavin (Pescaterritory): “There is no sure way to keep the music that we love going. We just have to hope and know that there are some people out there who were raised learning the right music! And that’s who we play to.”

Noah (Silver Sky): “We keep doing what we’re doing. Spread this shit like a disease and play all over the damn place. I feel you gotta accept the changes, it’s not always gonna be just like Slayer or just like this or that. A new era means it’s gonna change at least a little. You just gotta be open to it.”

Jake (Silver Sky): “And listen to new Hard Rock bands not just your favorites. And see them live because that’s how genres stay alive.”

Jason (Pescaterritory): “I don’t think a genre ever dies. Music can’t die. For instance, contemporary composers are still being inspired by the works of classical composers from centuries ago. Good music has staying power, and to steal a line from Frank Zappa, “Rock isn’t dead, it just smells funny.” Rock and Hard Rock will always change, that’s how great music is made, so by keeping it fresh and interesting, the genre will never die. Rock isn’t as mainstream as it once was, but it’s not about being mainstream, it’s about keeping the fire burning.”

CVW: Give us a quick update on each of your bands.

Garrison (Instigator): “Mixing is in progress for our first full-length album and should be done very soon. Other than that we’ve got a couple of big gigs coming up in December and January. We’ve been working hard for you guys and can’t wait to show you more Metal madness!”

Mark (Instigator): “I could not be more stoked. The album captures Instigator’s musicianship and original creativity, and sounds heavy at the same time! I’m gonna be really proud to show it to all our good friends in this desert.”

Jake (Silver Sky): “We don’t have a date yet for release. We’re gonna go back to Arthur Seay’s Bitter Sand Studios soon. We’re just really trying to get shows right now. We have a gig 12/14 at Gadi’s Bar & Grill in Yucca Valley. Our music video for “Brain Blind” is out now too!”

Jason (Pescaterritory): “We’re excited to announce the first PESCAFEST on Saturday, January 25, 2020 at the Date Shed. We’ll have Instigator and FrankEatsTheFloor on the bill. It’s 16 years old and up and cost of entry is $10.”

Find out more info on each band below: