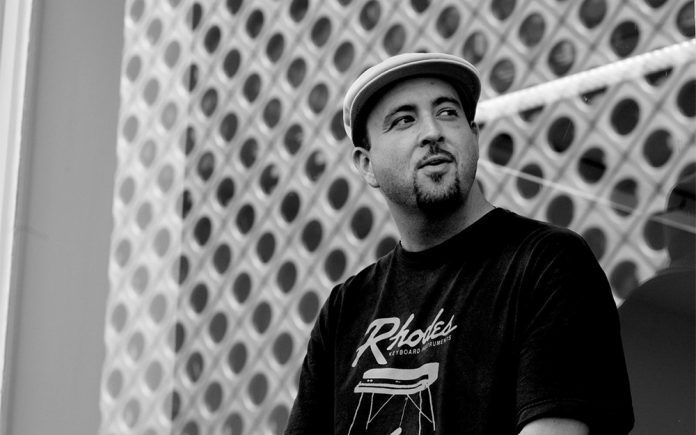 Known professionally as DJ Day, Palm Springs native Damien Beebe began making his own music for more than a quarter of a century. Aside from releasing two stellar records, The Day Before and Land Of 1,000 Chances, he has worked with the Stones Throw record label, collaborated with artists like Aloe Blacc, Clutchy Hopkins and remixed songs for People Under The Stairs, Alice Russell and Quantic. His music has been featured on taste-making stations like KCRW, The Independent 88.5 (KSBR) as well as the BBC. He’s shared the stage with superstars like Eminem and the late Amy Winehouse. Now, he’s just finished recording his third long-player, Life After You. I’ve known Damien for longer than I can remember. He was always one of those kids who spent all his money at The Wherehouse, the record store I worked at for 19 years. Even back then he always displayed good taste! I recently caught up with him to discuss his new album.

Eleni P. Austin: I guess we’ve known each other for a few decades now, but I don’t really know what Marvel or DC Comics would refer to as your “origin story.” Were you born and raised in the desert?

DJ Day: “Haha, indeed I was. I’ve lived a few other places over the years, but I’m a born and raised desert dude, through and through!”

EPA: What was it like growing up in the desert? What were your earliest musical influences? Do you remember the first album you bought with your own money?

DJ Day: “Without dating myself (too much), it was great growing up here. Even though I was too young for Palm Springs infamous Spring Break (in the mid to late ‘80s), I would ride my bike downtown to watch the insanity. It was a much mellower time here in general. I would say Herbie Hancock’s “Rockit” album and DJ Jazzy Jeff were my earliest influences. Those completely blew my mind, hearing scratching on a song for the very first time. I actually bought my first two records, RUN D.M.C.’s “Walk This Way” and Van Halen’s “Jump,” at the same record store you worked at, haha.”

EPA: Were you musical as a kid? Did you sing, or play” an instrument? Self-taught, or did you take formal lessons?

DJ Day: “I was always putting on little shows for my parents in the living room. I’m an only child, so I’m sure that need for attention carried over into my career. During junior high, I was played drums in the stage and marching bands. I also took choir in high school for three years. That said, overall, I consider myself self-taught. I’ve sung on a few songs and still play drums and keys all the way up to this latest project.”

EPA: When did that translate into DJ’ing? How old were you when that took hold? When did you have your earliest equipment set-up?

DJ Day: “When I was around 12 or 13, I was obsessed with DJ’ing. I got an all-in-one dual tape deck/belt drive turntable for Christmas, and I would listen to records that featured scratching over and over again. I would try and figure out how they were creating these sounds. I had no instruction or anything except the occasional clip on T.V. to even understand how it worked.”

EPA: Tell me about your earliest gigs, how did you go from the desert to becoming a worldwide sensation?

DJ Day: “Haha, I wouldn’t say that, but I have been incredibly blessed, being able to travel and make a living doing what I do. Coming from local house parties to playing festivals in other countries is something I never would have imagined back then. I remember the first time I used a professional DJ set-up in a house on Sunny Dunes when I was 15 or so. I had no idea how to use the equipment and was literally booed off the turntables! That was a transformative moment for me, it actually drove me to work harder. I made a pact with myself, that I would come back and show people there was more to me than that experience. I believed in myself and loved it too much to let it ruin me. A year later, at a party with other DJs in attendance, I let it be known I wasn’t going anywhere. Decades have passed and I’m still here. It wasn’t easy to be heard locally, meanwhile, trying to make any kind of noise outside the desert pre-internet, was a whole other hurdle. It took another 15 years before I would release my first record or tour outside the U.S. This answer is already wild long, but there’s more to the story of how I got from there to where I am today.”

EPA: It’s been nearly a decade since the release of your brilliant sophomore effort, Land Of 1,000 Chances, have you been working on this one in between commitments, or is Life After You a result of the pandemic?

DJ Day: “The new album came about in such a different way than Land Of 1,000 Chances. I worked on that with studio musicians and an executive producer (shout-out to Thes One). A few years later, in 2016, I went through a period of trying to make a project where I play everything live. I realized my limitations pretty quick, but a lot of the drums I played and recorded (in 2016) as well as some sketches were still salvageable. For this new release, Life After You, I went back to some of those earlier ideas. building songs around some of them, as well as using and chopping samples, playing keys and synths, etc. It was definitely a result of the pandemic, some of the record references that moment in time.”

EPA: Tell me more about the new record. Does the title, Life After You, have any significance?

DJ Day: “Yes, it absolutely does. It’s a densely packed story of my life post-divorce, failed relationships, as well as losing friends and family to COVID and other tragedies. Frustration with how polarized we’ve all become, etc. But it also has joy and hope and love, that I’ve experienced in that time, as well as all the emotions that fall between those two sides of living. Making the record was a strange process for me. I’m used to over-analyzing everything and sometimes making songs too sterile. Whereas the new stuff feels raw and urgent. I wanted to try and capture some the angst we all felt during these last 4-5 years, but without resorting to heavy-handed messages. It all became sort of a stream-of-consciousness thing as I was making it. I hope people can make their own story with it as well. I have my own view of what it is, I want people to have their own too. EPA: Well, that’s the power of music. We can ascribe our own emotions and memories to something wholly created by someone else. I know the album begins streaming at the beginning of March, when can we expect physical copies on vinyl and CD?

DJ Day: “That’s the million-dollar question right there. Currently, there’s a massive wait for vinyl manufacturing-I’m talking at least a year out for an indie artist if you’re lucky. Major record labels see vinyl sales soaring and are essentially cutting the line with their artists, pressing millions of copies of Adele or Billie Eilish, or whomever. It’s forced everyone else to wait indefinitely. So, at the moment, I can’t give you a definite answer, and I’m honestly not sure if I will ever press this on vinyl.”

EPA: You had a longtime, weekly residence at the ACE Hotel here in Palm Springs. Are there any plans to do something like that again, or are you eager to return to the road?

DJ Day: “I would like to do another local residency out here again. There’s a new place downtown called The Alibi that’s set to re-open (in mid-March) that is an awesome venue for live music. That would be a cool place to be a part of, (Liz Garo, if you’re reading this, Holler!). At this stage, I would prefer to be closer to home. The way things have been going with the pandemic, traveling outside of the country isn’t much of an option right now.”

EPA: Finally, a lot of local musicians make a name for themselves and once they’ve achieved a modicum of fame, relocate to bigger cities like Los Angeles or New York. You didn’t do that, is it because you feel a connection to the desert?

DJ Day: “I love visiting those cities, but this is home for me. Maybe one day I’ll move out of the desert, but for now, I’ll be right here.” (DJ Day’s new album, Life After You begins streaming on in March. Check it out at djday.net and djday.bandcamp.com)