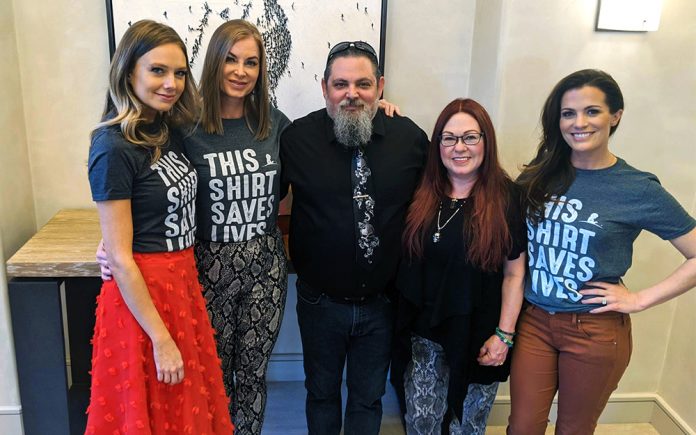 On Friday, January 24, the Warburton held a Catwalk Fashion Show at Toscana Country Club to raise money for St Jude in advance of their upcoming Annual events to be held March 5-8. They raised $58,000 at this first time auxiliary event. Three of the actresses from the Young & the Restless were in attendance and sat down with me for interviews about the charity event and to dish about the soap opera. This is Part 2 with the ladies. Part 1 ran in the February 6 issue.

CVW: How difficult was it to do the scenes with peter Bergman when he found out you had faked his paternity?

Davidson: “Not hard at all… at least for me. It was a fun, juicy storyline. I loved being able to excavate something that had started years ago. I really liked that side of Ashley. People would say that was mean and I just say that Ashley was being strong.”

CVW: Who has been your favorite love interest on the show?

Davidson: “They’re all alive so I couldn’t possibly say.”

CVW: What has been your favorite storyline?

Davidson: “Years ago Ashley had breast cancer. It was breast cancer awareness month at the time and she finds a lump and ends up having cancer and loses her hair. I got a lot of mail during that time. Women said that storyline helped save their lives because it made them go get a mammogram and early detection is so important.”

CVW: How have you felt about the Dina storyline with her having Alzheimer’s?

Davidson: “It’s much like the breast cancer storyline as it has raised awareness because it’s very prevalent. It’s been great to work with Marla again after all these years and I think the story has been beautifully handled.”

CVW: What was it like working with your husband Vince Van Patten on the movie 7 Days to Vegas?

Davidson: “It was kind of a mixed bag because he was basically my boss. And if I wanted to change something he would tell me that I had to say it as it was written and I was like you’ve got to be kidding me. (laughing) But it was really a lot of fun. We had a great time at the PS Film Festival which was probably the highlight of the entire experience of making the movie. The reception of the movie was so great and well received.  And I was happy for him. It wasn’t just me being in a movie but it was my husband’s baby.”

CVW: What else are you working on?

Davidson: “I just finished a movie, not sure when it will be out, but it’s called There Will Always Be Christmas with Michael Pare. You might remember him from Eddie & the Cruisers. And I’m still doing Y&R part time. I’m no longer under contract. It’s the best of both worlds for me because I have a lot more free time to spend with my family and I get to pop back into Genoa City every now and then and see my friends.”

CVW: How does it feel to be back with Adam and was it difficult for you going from the Nick relationship back to Adam within a couple days? 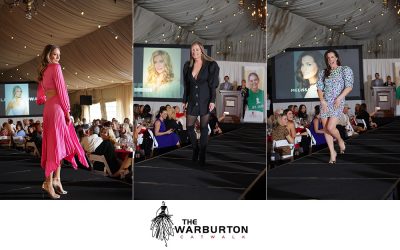 Egan: “A couple things… we are on a soap opera so these things happen so it’s not that jarring. I was so excited because I love Mark (Grossman)and I love the Adam Chelsea storyline that’s been going on for the last 8 years. But I love Josh (Morrow) and he’s one of my best friend at work.  But it’s sad when you realize your days are going to be different because Josh and I would get lunch together every day. I mean he’s my boy. He knows a lot about my personal life. So now the last 6 weeks we haven’t gotten to really see each other because we’re not working together. But you never know what’s going to happen I mean a year from now Adam could dump me and I’m back with Nick. I mean Adam has died 3 times on the show so you just never know what might happen. You just get used to rolling with the scripts. It’s always changing. And Josh’s thing used to be he was always in his man cave and no one could ever get him out of there for lunch. I got him out of that a few years ago when we started working together.”

CVW: What is it like working with Mark Grossman compared to the last 2 Adam’s Michael Muhney and Justin Hartley? I know you’re also good friends with Justin Hartley.

Egan: “Every Adam has been such incredible actors. Mark is so hard working and he’s a great actor. We have a similar work method. We love to run lines together. He’s got a great work ethic and has made the role his own. I’ve been really lucky to have 3 great Adams and Mark is kicking butt and I’m happy they chose him.”

Egan: “Chelsea may be getting back into the fashion industry. There’s some really fun stuff coming up for the Chadam fans that they are really going to like.”

CVW: I also saw on Instagram that you sing with a band. Can you share a little about that?

Egan: “Yes… so we started a band called Canal Street a couple years ago after I had left the show awhile back. A dear friend of mine was starting a band and these guys are incredible musicians and they all had known each other since grade school. My friends Greg and Dean asked me to sing back up. And Monica came on and has become a good friend. So we did a gig in Thousand Oaks and it sold out and then we sold out the Troubadour in June. It’s really just a hobby for everyone as we all have day jobs, but we’re going to keep doing it. Now Monica and I don’t just sing backup we actually do our own songs. We do mostly rock covers.”

Egan: “I’m just incredibly thankful for the fans. And I’m grateful to be back on the show with Josh Griffith writing again. He really did a lot for me when I was on the show before.”

CVW: Do you think Chance is a better fit for Abby than Nate was?

Ordway: “Aww I’ve been getting asked this a lot lately. I’m really hoping that Abby has maybe found her true love, but I had high hopes for Nate and Abby with Olivia, Nate’s Mom, being best friends with Ashley who was really behind the relationship and I was sad when they broke up. I loved that Nate was a Dr. and had his own thing going and didn’t attach himself to Abby’s boat. Victor was behind one of Abby’s relationship for the first time ever. It made sense why they broke up and they did it in a very mature way and have stayed friends.

I also love Chance and Abby and I feel like they’re very adventurous and feeding off each other’s excitement for life. I don’t want to say one relationship is better than the other.”

CVW: So what do you think about Phyllis being a fly in the ointment in Chance and Abby’s relationship?

Ordway: “There’s nobody that Abby loves to hate more than Phyllis. Michelle Stafford is a force to be reckoned with and an amazing actress. I never thought in a million years when I was watching the show growing up, that I would get to act opposite of Michelle. So getting to be in scenes where Abby and Phyllis are going at each other is so good. I can’t wait for everyone to see what’s coming up. There is a lot of hotel drama coming up between the two of them. Just getting to work with her is a dream come true and she is incredible and so much fun to work with. She really keeps you on your toes as an actor. She makes you better as an actor.”

CVW: Was it difficult trying to create chemistry with Chance so quickly after Nate?

Ordway: “Yes, because you do gain a trust with someone when you’re working that close with them. I’m going to throw it back to Arturo (Jason Canela) because he became a really good friend of mine so when that relationship ended I was like what? Because we weren’t able to be in love anymore and as much as it’s fake and acting you still build these friendships with people and when those end it’s a little weird because you don’t work with them anymore. We’re all like a family on the show. It is difficult, but it’s part of our job and it never gets boring. I always keep the door open because you never know what can happen next.

CVW: Who has been your favorite relationship for Abby so far?

Ordway: “I have a storyline that I’ve been pitching for years. I would love Devon and Abby to be in a relationship. I think Abby needs to find someone that has their own money and has their own power and that isn’t intimidated by her father’s power. And Devon and Abby are already best friends. But I also like the idea of Chance and Abby because he comes from the Chancellor money too and is a very strong character.

CVW: What has been your favorite storyline so far?

Ordway: “I would have to say right now. I can’t wait for you guys to see what’s coming up with Abby and Phyllis. With Ashley and Victor being Abby’s parents she has to have some street smarts and business savvy. I love that their getting to show that strong side of Abby.”

CVW: Is there anybody on the show you would like to work with more?

Ordway: “Yes. Bryton James (Devon). (laughing). Hunter King is one of my best friends so I would like to work with her more. But we would probably just laugh all the time because our characters hate each other. Eileen Davidson… I wish she was around more. I love working with her. She’s one of a kind.”