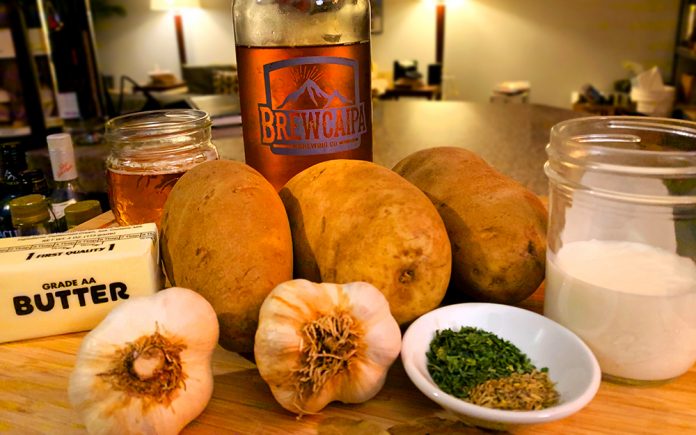 From a historic perspective, potatoes and beer have a link that goes back centuries and is particularly linked to German brewing. Called kartoffelbier (kartoffel is German for potato), this style no doubt originated in times when barley or wheat were not in plentiful supply, and necessity became the mother of invention. I mean, let’s face it; nobody ate tripe and chicken feet because there was an over abundance of other foods. No, you ate animal guts and bird paws because it was either that or starve. I suspect it was the same when it came time to making beer, you either used potatoes or you went sober *shudder*. 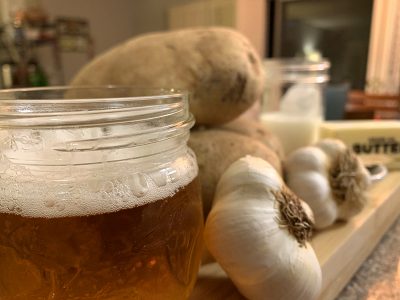 Many food dishes have come to incorporate both potatoes and beer in their ingredient list, soups and potato salads with a beer dressing are both popular German recipes, and can be usually found at Oktoberfest feasts being consumed along steins of beer. But a distinctly American twist comes in combing the nutty, creamy, mildly pungent flavors of roasted garlic with the dank, pungent, citrusy flavors of a west coast IPA together in a twist on the classic side-dish of mashed potatoes. If you’ve never had roasted garlic IPA mashed potatoes before, this is a recipe that brings new dimensions of flavor to a staple and elevates it to a starring role. 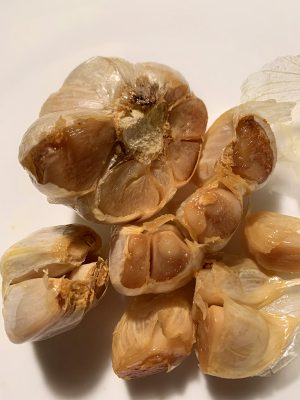 According to the International Potato Center (I swear I did not make that up, it’s real) there are over 4,000 varieties of potatoes world over, including over 180 varieties of wild potatoes. The term “wild potato” makes me think of feral potatoes, all covered in bristly hair and who will gore you with their potato tusks if you get too close to their potato dens where their potato-let offspring reside (I have the imagination of a child, so all of that makes total sense to me). Although you have many varieties to choose from when making this recipe, I chose good old Russet potatoes for their convenience, as they are the most common variety sold in grocery stores. I was inspired by the idea to come up with this after reading “The Craft of Stone Brewing Co.”, as the book contains a recipe for “Stone IPA Garlicky Mashed Potatoes”. Although my recipe is very different from the one presented by Stone, I none the less give them credit for providing me the concept.

Preheat your oven to 350 degrees F. Cut the top ¼ inch off of each head of garlic, leaving the head intact but exposing the individual cloves. Place the heads cut-side up on a large sheet of aluminum foil and drizzle with olive oil. Gather the foil up around the garlic, twisting and folding to seal. Place in oven and roast for one hour. Remove from oven and let cool before squeezing the cloves out from the bottom up using your hands.

In a medium sized pan, combine butter, milk, bay leaves, thyme, and parsley, and turn heat to medium. Bring to a boil then reduce heat to low and simmer for 10 minutes. Remove bay leaves from sauce and 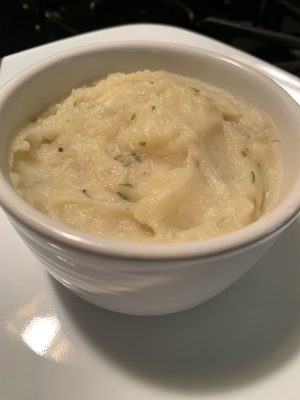 While your garlic is roasting and sauce is infusing, boil your peeled and diced potatoes in a po t of cold, salted water until the potatoes are easy to pierce with a fork, about 15 to 20 minutes after the water started boiling. Drain potatoes and return to pot. Add the ½ cup of IPA to your garlic and butter sauce, whisking in just before adding to the potatoes. It is important to add the IPA last this way, because cooking the IPA over heat will actually isomerize the alpha acids in the hops, making it even more bitter and ruining the taste of the dish. Mash your sauce into the potatoes, and work until the desired consistency is achieved. If your potatoes are too stiff, adjust with more IPA. Season with salt and pepper to taste.

I highly recommend this recipe! I served it to friends as a side dish to smoked pork ribs alongside roasted vegetables, and it was a hit. Try it for yourselves and let me know how it went!